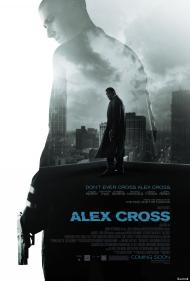 Going in to this movie I was thinking it can't possibly be as bad as so many critics have claimed. Boy was I wrong. As far as bad movies go, this one is right up there near the top of the list. Although, judging by the fairly packed theater I saw it in, Tyler Perry has a big enough fan base for it to open big. Although I can't imagine word of mouth being positive on this crappy film.

For starters Tyler Perry can't act. He seems completely miscast trying to project masculinity as a tough detective seeking vengeance against a serial killer. It would have been more believable (and certainly more entertaining) if he had put back on that familiar house-dress and wig and played the part as Madea. He delivers his lines with the naturalness of a ventriloquist's dummy, rarely bothering to change his facial expression, except to purse his lips every so often in an apparent attempt at projecting anger.

Loosely based on the book by James Patterson, this screenplay never met a cliche it didn't like. The dialogue is hackneyed, the plot entirely predictable, the editing sloppy, and the camera work intrusive. The climactic showdown between Alex Cross and the psycho-assassin called Picasso (played by a rail thin Matthew Fox) is filmed in such a shaky manner that one can only assume it was to cover up the fact that Tyler Perry can't throw a realistic looking punch. Rob Cohen directs with all the sophistication of a 70's television police drama. Every plot detail is projected way ahead of time.

Alex Cross is a detective/psychologist with the observation and deduction skills of a modern day Sherlock Holmes. To get this point across, the director includes a scene where he deduces his wife's activities during her day by merely examining her appearance. He comments that she had a latte and then points out a large foam stain on the front of her blouse. See how brilliant he is!

Tyler Perry and Ed Burns are partners who have supposedly been best friends since kindergarten, yet they have absolutely zero chemistry together. It seems more like they were just introduced to each other right before they stepped in front of the cameras. Like all cop-buddies they banter good-naturedly while investigating their case but their back and forth ribbing seems forced.

The only good acting work is done by the supporting cast. Cicely Tyson, Jean Reno and Giancarlo Esposito all bring a certain gravitas to their small parts but it isn't enough to offset the wooden performance by Perry in the titular role.

Alex Cross is set in the beleaguered city of Detroit, Michigan. Perhaps, if nothing else, this movie will bring attention to this once great metropolis. Many of its iconic buildings are on display. The climax takes place at the now shuttered, but once stunningly ornate, Michigan Theater. This 13 story building was constructed in 1925 and in its heyday its stage was graced by the likes of Benny Goodman, The Marx Brothers, Betty Grable and Bob Hope. It is now an office building and parking garage.

As if Alex Cross wasn't bad enough, check out the tagline above. Talk about adding insult to injury. That has to be one of the dumbest lines ever written for a movie poster. Never before (in more than a dozen years of writing movie reviews) have I felt as justified in living up to our motto here at Three Movie Buffs, “We waste our money, so you don't have to.” Well consider this fair warning. Stay far away from Alex Cross.