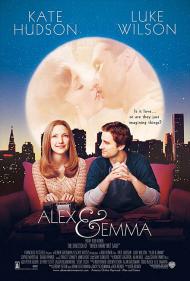 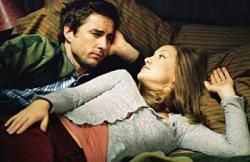 Luke Wilson and Kate Hudson in Alex and Emma.

Almost all romantic comedy films have easily guessable plots as well as endings. The fun in watching them is seeing how love happens to two likable characters. Alex and Emma is one such nice little romantic comedy. However, while I can excuse the lack of plot originality, I cannot overlook the main characters lack of personality. They are little more than cardboard cutouts.

Alex is a novelist with writers block. He owes some thugs money, but will not have it until he gets paid for finishing his latest book. Emma is a stenographer whom he convinces to work for him. Their first meeting is meant to be cute as she assumes she has been tricked into coming to his apartment because he wants her for sex. The scene is a complete wash. She eventually agrees to type for him as he dictates.

With Emma as his muse, the words and plot spills forth from Alex. The movie then begins a second story. Wilson and Hudson each play characters in the book as well. Hudson gets to use many different accents as the ethnicity of the au pair, in the novel, keeps changing. As the book progresses we discover similarities between the two story lines. This is supposed to create a level of tension, but come on; it's a romantic comedy. There is never even the slightest doubt of how this movie will end.

To top of the lack luster plot is the most boring actor of his time, Wilson. This guy has movie star looks but absolutely no charisma. He appears to be bored the entire movie. Maybe he needs some Prozac or at least a lot of caffeine. If I had seen this film before we wrote our worst acting of the year article I would have seriously considered replacing Eric Bana's exaggerated performance in The Hulk, with Wilson's sleep walking one here. Actually, Wilson sleepwalked through Charlie's Angels and The Royal Tenenbaums as well. I get more enjoyment out of watching paint dry than watching this guy think he is acting. Luke may be better looking than his brother, but at least Owen has comic timing and some onscreen charm.

I am always a sucker for a romantic comedy. At least I was, until I saw this yawn fest. Hudson and Reiner have worked and will work on better films. Wilson should consider a career in modeling. That way, he can make good use of his best asset, his looks, and put a lot less people to sleep with his bland attempts at acting.