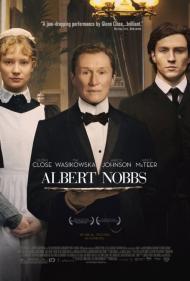 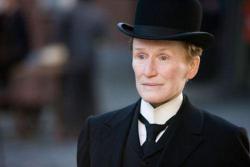 At one point in the film, Dr. Holloran (Gleeson) says of the title character, "Jesus, I don't know what makes people lead such miserable lives." I would echo that statement, but alter it slightly to say, "Jesus, I don't know what makes people make such miserable movies." This overly long, depressing piece of work is without ever the slightest hope of a happy ending and that makes it a tough two hour slog to get through.

Of course the obvious reason that Glenn Close pushed so hard and so long to get it it made is because she gets to play the title character and she buries herself in the part and has been earning awards buzz and nominations for it. It's just a shame that the rest of the movie isn't that great.

Close plays Albert, a butler at a hotel in 19th century Ireland. She's a woman pretending to be a man for reasons that come out as the movie progresses. Near the beginning of the film she is forced to share her room and bed at the hotel with a workman who's doing some painting around the place. By an implausibly incredible coincidence, the workman is also a woman dressed up as a man. Either that or there were so many women going around impersonating men in Ireland in those days that she was bound to end up sleeping with one of them.

Finding a kindred spirit for the first time in her life, Albert strikes up a friendship of sorts with Hubert and learns a bit more about life. Hubert is married to another woman and this inspires Albert to pursue another woman who works at the hotel. It is Albert's dream to open a little shop and she wants to marry the maid and have them run the shop together.

Albert's pursuit of the maid is seemingly without sexual desire. For most of the movie she comes across completely ignorant of such matters. It doesn't even dawn on her until near the film's climax that Hubert is actually in love with her wife. Albert has repressed everything about herself for so long that she has difficulty reading the true emotions of others.

Part of the problem with this movie is that while Glenn Close just about manages to pass for a man, it's completely obvious that Hubert is a woman. I had no idea that there was another male impersonator in the film until the second Hubert showed up and I said, "Oh, she's a woman too." How does no one else in the movie not see it? The only reason they might not is because in those days no one would be expecting it, but even then, there's just no denying by the shape of her face that she's a woman.

Another problem with the movie is that from the very beginning it's obvious that there is never going to be a happy ending for Albert. Every signal along the way points to a tragic ending to this tale. And since we know that, the two hours that it takes to finally reach the depressing end feels even longer. Several times during the film I said to myself, "Oh just get there faster."

While Close does do a good job in the lead, to be honest it feels like a stunt or an acting exercise. Maybe if the story her character was inhabiting was more interesting then it might not feel that way, but it's not and it does. 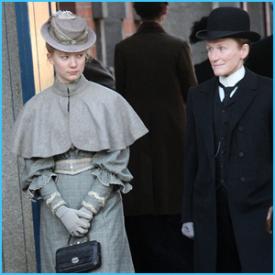 Scott, we’ve had this discussion before but it bears repeating. There is a big difference between a depressing movie and a tragic one. Albert Nobbs is incredibly sad but it’s no more depressing than Romeo and Juliet or any other classic tragedy. I don’t know about you but I sometimes enjoy shedding a tear or two over a movie that eloquently showcases the injustices of man’s inhumanity to man. Albert Nobbs is one such movie. To me an example of a depressing movie is one like On the Beach, where humanity is wiped out after a nuclear war.

I also disagree that it is an “implausibly incredible coincidence” that she meets another woman disguised as a man. If you think about it, it was probably more common than you would imagine since there were most certainly lesbians in the world at that time, and the only way they could live openly as a couple would be if one of them passed as a man.

Glenn Close deserves the Oscar for this role. She perfectly captures Albert’s naiveté. As Scott wrote she is so emotionally repressed that she hasn’t a clue about the inner emotions of others. She also seems ignorant of the possibility of sex between two women; although once she discovers the possibility of it she seems genuinely intrigued.

It is heartbreaking watching her awkward attempts at courting the maid Helen. As my brother said, you just know it isn’t going to end well. I do agree that Janet McTeer is less convincing physically as a man than Close is, but given the sexist attitudes of the era I believe people would have been less likely to question it than they would today. Most men in the 19th Century wouldn’t believe a woman capable of behaving with as much masculinity as these women display.

One of the most intriguing scenes is where Albert and Hubert don women’s clothes and go for a walk on the beach. Neither of them has a clue how to maneuver in these feminine trappings. They saunter clumsily like two men in drag.

Albert Nobbs shows the hypocrisy of some people who claim to be Christians but are actually self-serving, sanctimonious assholes. This is personified in the character of the hotel owner. She also serves to demonstrate the point that it isn’t only men that victimize women, just as the good doctor is there to represent a sympathetic male figure.

But it is the sad little butler Albert that dominates the story as she counts her money and plans her dreams. She isn’t asking for too much. She wants what we all want, someone to love and a little place to call her own. No, Scott I didn’t find this movie depressing. On the contrary I thought it showed the resilience of the human spirit to rise from the ashes of despair. Albert Nobbs never gave up and never quit fighting for her dreams. 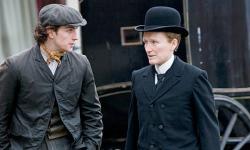 I agree with both of my brothers, but on two different issues.  Scott is right that two cross dressing women finding themselves accidentaly in bed together is, "an implausibly incredible coincidence."  I agree with Patrick that the story is not depressing at all, but merely sad.

The opening shot of Albert Nobbs lighting the lamp and checking his watch is extremely reminiscent of Barbra Streisand dressed as a man in 19th century Europe, only she lit a candle.  I half expected Close to start singing, "Where is it Written?"  Albert Nobbs quickly separates itself from Yentl as she cross dressed to study Talmud, while Nobbs is a lesbian.

I disagree with Scott that this film does not offer the slightest amount of hope.  The film insinuates a possible happy ending.  I thought all along that it was going to end that way, only with Nobbs holding the baby.  The plot sets the viewer up to imagine how Nobbs's dream could actually come to pass.

The best part of the film is Nobbs discovery that she is not alone and that she may in fact find a life she never even dared to dream existed.  The look on Nobbs's face, when she finds out Mr Paige is married, and Mr. Paige says, "Her name is Kathleen."  is like that of a person waking from a life spent half asleep.

Albert Nobbs is not a film I intend to watch again anytime soon, if at all, but it does have something to say.  Glenn Close gives one of the best performances of the year.  I just wish it had a better ending. 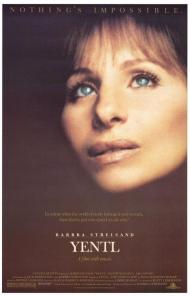