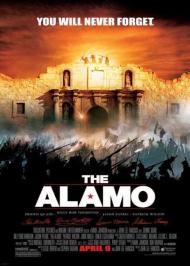 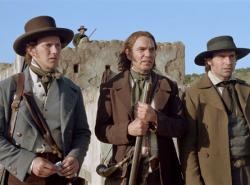 The only real problem with this latest retelling of the battle of the Alamo is in its sometimes lumbering pacing. A movie nearly 2.5 hours in length really needs to limit the number of scenes of the Texas landscape. And while soldiers silhouetted against the sky atop the walls is a very iconic image, it does little to move the story along. Apart from this somewhat patient style of filmmaking however, 2004's The Alamo is fairly decent rendition of this epic moment in American history.

Another way this movie might have increased its pacing, or at least shortened its running time, is by beginning with the start of the siege of the Alamo. Instead, it begins (after a very brief prologue showing the dead soldiers at the end of the battle) with the back-story before the battle, detailing the tribulations of Sam Houston (Quaid) trying to put a Texan army together while dealing with the politicians of the newly formed Texan government. We are also introduced to the main characters in the story, most of who are legendary figures of the American frontier. We meet drunken, consumption ridden Jim Bowie (Patric); inventor of the Bowie knife, by the book Col. Travis, the megalomaniac General Santa Anna, and of course the colorful backwoodsman and former U.S. Senator; David Crockett (Thornton).

The siege of the Alamo itself doesn't begin until nearly 40 minutes into the movie, and it ends almost twenty minutes before the movie's climax. Rather than just covering the Alamo, the movie really attempts to cover the entire Texan bid for independence, which is a bit much to squeeze into such a short time span. If the intent was to tell the story of Sam Houston, less time should have been spent strictly upon the Alamo, but of course, that would have meant changing the name of the movie.

When you're dealing with a thirteen-day siege, you need something to hold an audience's attention. What this movie has going for it is an outstanding cast, with Billy-Bob Thornton leading the way and stealing the film as Crockett. The way his character is presented is the highlight of the movie. Rather than a legendary hero, he is portrayed as a very human and humorous character. Instead of showing up to fight, he is stunned to discover that the war between Mexico and Texas is still ongoing. He also brings a much-needed levity to some of the more somber moments.

Visually this movie is also impressive with some of the best battle scenes yet shot. One night battle scene is particularly stunning as the camera rises into the air, encompassing the entire fort as the Mexican army swarms over the walls, the sky lit by rockets and cannon blasts.

In the human moments and the battle scenes, this movie works. It faithfully recreates an early defining moment in our nation's history with a minimum of melodrama and with a talented group of actors. It's just a pity that they couldn't have picked up the pace while doing it.

Dennis Quaid in The Alamo.

The only problem Scott had with this movie was the pace? Pacing is the least of this movie's problems. This version of The Alamo is completely hollow. There is no emotional center. At no point in the film do you connect to any character.

Many years ago, I visited a friend who lives in San Antonio, TX. We visited the Alamo. It is now right in the middle of the city. The walls still show thousands of bullet holes. I stuck my finger in one such hole and felt a smooth object. I excitedly told my friend that I had discovered a musket ball and if only we could retrieve it from the hole, we could have a swell souvenir. My friend, being a proud Texan, told me that, by no means, were we to remove the bullet as it would desecrate the Alamo.

Yeah, Texans treat the Alamo as a sacred place. A beautiful monument featuring the likeness of many of the better known defenders is proudly displayed in front of it. Ozzy Osbourne got in trouble years ago, when he took a leak on a wall of the Alamo. According to rumor, he was banned from ever coming to San Antonio again.

All of this pride and emotion is real; more than 100 years after the fact, yet this movie lacked any of it. It was like watching a docudrama. You see the fighting and meet the men, but at no point do you really care about anyone, other than by the fact that you don't want to see anyone die. You watch history unfold but it never asks you to make any emotional deposit.

This film almost seems to want you to not like anyone. Colonel Travis is shown as a heartless, self center dandy. He cares about the details of his new uniform, yet abandons his wife and kids. Jim Bowie is shown as little more than a drunk, who is accused of marrying for money. Sam Houston seems to be all about politics and drinking.

The biggest casualty is Davy Crockett. This movie goes to great length to dispel every possible myth about him. He says that he only wore a coonskin hat because an actor portrayed him that way. He shows up at the Alamo because Sam Houston promised him some land. When gets there he is genuinely surprised to find out that the fighting is not over. Crockett's final scene as the last man standing is historically questionable.

The Alamo is directed with a good eye for detail and, for the most part, accuracy. But that is all that this movie has to offer. A movie can have great direction, acting and special effects, but if it fails to generate an emotional response, from the audience, then it fails. This is exactly what happened to The Alamo.