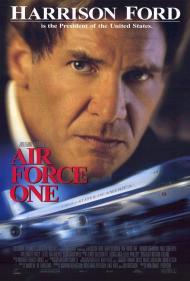 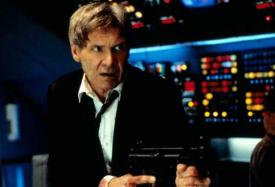 Harrison Ford as the President in Air Force One.

This is Harrison Ford's best movie that is not part of a series or based on some previous source. The action sequences come fast and often, yet what keeps it all together is the tension surrounding these people involved in a terrorist attack aboard Air Force One.

While in Moscow at an official dinner, Harrison Ford as President James Marshall gives a brief speech in which he firmly states that he will not negotiate with terrorists.  With his staff whining about his speech, he returns to the airport to fly home.  The first lady and their daughter were at the ballet and meet President Marshall on Air Force One.

Also taking the flight is a group of Chechen terrorists, pretending to be reporters.  Lead by Gary Oldman, doing political fanatic like it is nobodies  business, the group is deadly set on taking the plane and capturing the President.  He and his band will stop at nothing, and the body count adds up to prove it.

Minutes into the flight, we learn that there is a traitor onboard and the movie starts an exciting ride that just keeps building speed to the final scene.  The Chechens take the plane with secret servicemen losing their lives right and left.  The President, a former Marine helicopter pilot, who flew many missions in Vietnam, must channel is inner soldier and fight for his life as well as his families, the remaining staff and for that matter the freedom of the world from terrorism.

President Marshall is an amalgam of real U.S. Presidents.  He has one daughter like President Bill Clinton.  He fought in a war like George H Bush, who flew planes and was even shot down in World War II.  His anti-terrorist speech is reminiscent of a speech Ronald Reagan gave in a debate with President Jimmy Carter, "I believe It is high time that the civilized countries of the world made it plane that there is no room world wide for terrorism.  There will be no negotiation with terrorists of any kind..."   What the world needs now is a real President Marshall!

Glenn Close does a great job as the Vice President. Although they never share a scene, Close is one of the few female leads to hold her own in a Harrison Ford film.  She and the secretary of defense have a ongoing power struggle, but when she barks out the line, "Your Commander in Chief has just given you a direct order. Do it!"  You know who is in charge.

Air Force One is a fantasy, with Harrison Ford playing the kind of hero we all dream we could be.  Ford's charm is that he has always been able to play a common person.  Even though he has movie star looks, on screen he never seems out of reach like Brad Pitt or condescending like George Clooney.   He convinces us, even though he is in extraordinary circumstances, that he is just a man trying to do his best, and with that creates a bit of inspiration and pride, something lacking from so many real leaders. 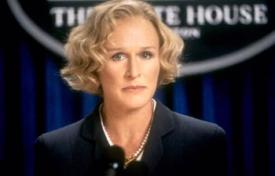 Glenn Close as the Vice President in Air Force One.

I remember watching this movie and thinking how cool it would be to have a president that was this heroic. He kicks butt. Like Die Hard the simplicity of the story line actually makes the film better. There are scenes of gripping suspense.

Action stars over the age of fifty are almost always ridiculous yet Harrison Ford completely pulls this one off, probably because he is playing the President. I agree with Eric that both Gary Oldman and Glenn Close do great work here.

Like all great thrillers there is humor thrown in to break the tension. Especially funny is the scene where Mr. Ford, desperate to get help, tries to call the White House only to be treated like a crank caller.

This movie keeps getting better as it goes along until you are thinking, 'How can he possibly get out of this alive.' The writers as well as Harrison Ford deserve the credit for making this happen in a convincingly realistic manner. 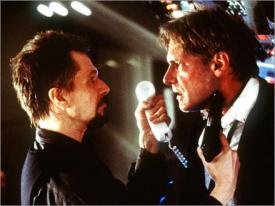 Gary Oldman and Harrison Ford in Air Force One.

A simple enough plot, President and first family held hostage on Air Force One, while returning from Russia. Great cast; Harrison Ford, Glenn Close, and Gary Oldman among others, as Patrick and Eric have said.

Some of the action is quite good, and the scene where Gary Oldman holds the gun to Harrison Ford's daughter's head, is particularly tense.

One point that always bugs me in this movie, is the cell phone scene. Harrison Ford finds a cell phone in the baggage compartment and all the way from Russia is able to call the White House. He must shop for phones at the same place Scully and Mulder do.