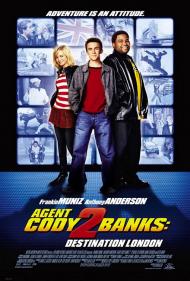 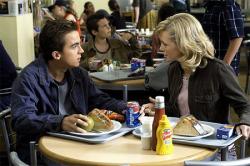 Certain movies aim for a particular target audience. There are those who aim for women, those who cater to adolescent boys, those that seek out the Sci-Fi geek, the lovers of romance, or the mystery buffs. At last, with the release of Cody Banks 2: Destination London, a long over looked demographic now has a movie that was obviously made for them to enjoy. I'm talking of course for those few people with an IQ of less than ten. Now, I know what you're thinking, if their IQ were under ten, they'd be nothing but human vegetables. Well, believe me when I say that is exactly what someone would have to be in order to enjoy this god-awful movie.

This is a movie that is marketed as being funnier than its predecessor. Now I'll admit right here that I never saw the original Cody Banks, and if that claim by the filmmakers is true, than as god as my witness I hope I never do because if it's possible for a movie to be less funny than this one, I pray I never have to see it. This is a movie where someone farting in an elevator is passed off as a joke. I mean, who wrote this thing, five-year olds?

Its plot, which has more holes than the Titanic after it hit the iceberg, goes something like this. Cody Banks is at CIA summer camp when the camp counselor/CIA trainer of young children who's parents don't know they work for the government, steals a couple of disks from the secret and quite huge government complex that exists below the camp and escapes with the unwitting Cody's assistance. Eager to redeem himself, Cody follows the villain to London posing as a musical exchange student.

I understand that in the first movie, the CIA needed someone to infiltrate a high school, so it made sense (sort of) to use a teenage agent, but just why the CIA would send a sixteen-year old after a full-grown man (with the ability to build a mind control device that could take over the world) in this movie, is a question that no one ever asks. Of course no one ever asks why none of the guards in the underground complex were able to stop the villain from stealing the disks in the first place, or why they sent helicopters, or why...well, let's just say there's lots of those questions you could ask, but this movie just isn't worth it.

Once in London, the movie throws in a black character as Cody's resident controller, whose personality was apparently purchased at Stereotypes-'R-Us. But this is obviously just cover because every character in London is a stereotype, including each of the international students studying at the private estate where Cody is undercover, all of who come with a cute little accent.

The movie wanders its way to the climax, throwing in a cute, female British agent for Cody to work with, but absolutely zero in the way of surprises, other than the sheer fact that someone somewhere thought this movie was a good idea. 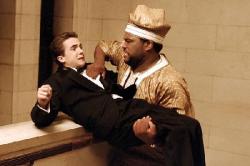 It is more about age than actual IQ. Although I am not exactly sure how narrow the target audience age for this movie is. My 8 year old liked it well enough. He laughed a couple of times. My 10 year old watched it, but was not very impressed.

The first Cody Banks' movie had a decent enough set up. A teen secret agent, who is nervous around girls, is needed to get close to a daughter of a scientist. Even if the action was phony, you still could relate to his teen angst. The movie actually attempted to justify using so young a spy. In this one, there is absolutely no reason for anything.

My sons like watching James Bond movies. They are more movie-sophisticated than this film. They enjoy the chases and fights. Although Cody Banks chases and fights, it is never exciting. Even they know he is never in danger.

Since the makers of this movie chose not to take it seriously, they should have turned out more laughs. Anthony Anderson manages a few decent lines such as referring to Banks as "the inch-high private eye. "In what is either an attempt at more jokes or just an insult to England, every male British character comes off as an idiot or a windbag. None however, is funny. 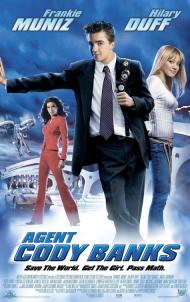