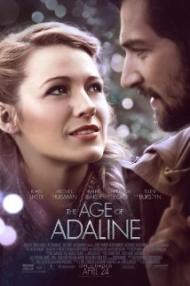 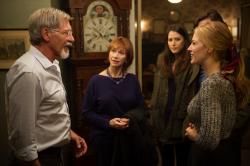 Harrison Ford and Blake Lively in The Age of Adaline.

The Age of Adaline is a romantic drama, a genre that seems quite rare in today's multiplexes. It's refreshing to see a love story about grown-ups, aimed at grown-up audiences. And while this isn't a perfect film, it is good enough, thanks in large part to performances by Blake Lively in the lead role and Harrison Ford in a supporting one. If you can buy into the immortality premise and the major coincidence in the plot, then you should be able to enjoy the melodrama.

In her first film since 2012's The Savages, Lively plays the title role. Born around the turn of the last century, Adaline becomes immortal at the age of 29 thanks to a car accident, frigid temperatures, and a bolt of lightening. With the majority of the story set in the present day, we learn this through flashbacks and also that she has spent the intervening decades continually changing her identity and trying to avoid being noticed, with her aging daughter (played by Ellen Burstyn) her only confidant. Things change for Adaline when she meets Ellis, a self-made philanthropist and all around bland female fantasy, and falls in love. Further complicating things is the fact that Ellis's father, played by Ford, turns out to be a former lover of Adaline's in the 1960s, who is baffled by the exact resemblance of his son's girlfriend to his ex.

Lively delivers a sincere performance and looks radiant throughout. She gets to dress up in a variety of beautiful costumes and change her hairstyles to match the different time periods. She carries most of the movie. Unfortunately, her romantic counterpart doesn't fare as well. Dutch actor Michiel Huisman is underwritten as Ellis, the man Adaline falls in love with. With his chiseled abs and great wealth he's pure female fantasy and eye candy. And yes, there have been plenty of films where the gender roles have been reversed, but the very best love stories feature two fully developed characters.

It isn't until Ford shows up about halfway through that we get a male counterpart worthy of her. We see the story of how his William met Adaline in England in the 1960s. The younger version of William is played by Anthony Ingruber, who I mistakenly assumed while watching was a CGI created version of a young Ford, but who turns out is simply a dead ringer for the actor. Ford plays the older man disturbed by memories of a long lost love quite well, rousing suspicion from his wife by his reactions.

If you can accept the premise, which the superfluous narration gives a pseudo-scientific explanation for, and appreciate a good love story, you should enjoy this one. It also makes a nice change of pace before the deluge of big budget action films about to flood movie theaters as the Summer movie season begins.

Anthony Ingruber and Blake Lively in The Age of Adaline.

I was able to accept the premise. It's the best thing about The Age of Adaline. Who hasn't fantasized about what it would be like to stay forever young? I enjoyed certain aspects of this movie, like the mother/daughter relationship between Lively and Burstyn. And Harrison Ford gives one of his most heartfelt performances in years. Where I disagree with my brother is when he calls this a good love story. The central romance is the weakest aspect of the movie.

Adaline acts as if she's finally found her soul mate in Ellis but there's nothing in the script, or in the chemistry between the actors, to demonstrate this grand love. We just have to accept it. The problem is that Adaline experiences greater passion and chemistry with another character in the story. I don't want to spoil it so I won't name him but for me it kind of ruined the idea of Adaline and Ellis living happily ever after together.

I also thought they dropped the ball a bit on all of Adaline's past lives. She's been changing her identity and moving to another state every ten years since the mid-1950s, yet we are shown only a few brief glimpses into her past. Her final romance should have taken up just the last 30 minutes of the movie and we could have spent more time watching Adaline grapple with the changing times. I would have liked more scenes between mother and daughter as the years went by.

Like Scott said, Adaline (Lively) dominates the story anyway so why limit it to just the present time? I mean what's the point of having a character that doesn't age if you aren't going to explore the passage of time more intricately and in greater detail? Think of the social changes and technological advances Adaline saw in her lifetime. Also the final romance would have carried more emotional weight if we had seen her through a series of previous relationships.

The Age of Adaline has a great premise that the screenplay, unfortunately, fails to fully explore. Too much time is spent on a tepid romance instead of telling us the whole story of Adaline's age. 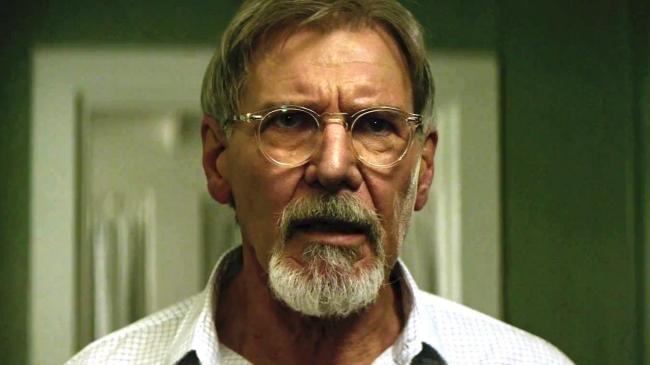 Harrison Ford in The Age of Adeline

I agree with Patrick that the main love story between Adeline/Jenny and Ellis is tepid and mostly uninspired. Their romance is fairly Hollywood generic. These two good looking people meet, are attracted and impressed with each other. Jenny acts mysterious while Ellis speaks in romantic terms, “Years, lovers, and glasses of wine. These are things that should never be counted.” At one point Jenny asks Ellis, “Tell me something I can hold on to forever and never let go.” Ellis responds, “Let go.” As much as they try to act love struck, their big connection is merely that Adeline and Ellis are both intellectuals. They have plenty in common but they lack the emotional impact that she shared with William.

The scene where Adeline and William meet/are reunited is loaded with sentimental anguish. You can see on Ford’s face that a thousand buried memories are suddenly resurfacing. This is just over the half way mark and finally the movie becomes intriguing. William speaks highly of Adeline, causing his wife to become jealous. Meanwhile, Adeline is looking on at a man she once loved and essentially never stopped loving and has not seen in decades.

During the weekend spent with Ellis’s family, Adeline must confront the fact that her lengthy life has affected others in ways she may have not fully realized before. She had to say goodbye to many people she cared for but they in turn had to say good bye to her as well. Dating Ellis and meeting back up with William puts Adeline at a crossroads. Ellis may provide a (temporary) future while his father reminds her of her past and how difficult a long term relationship may be. I found her dilemma interesting enough and was caught up in the story of how it would play out.

Scott mentioned that much relies on accepting the lack of aging premise. It works for the romantic notions of the story but the pseudo-scientific explanation is worthless. A car accident, frigid temperature, a bolt of lightning and some mumbo jumbo is less easy to take than the vampire excuse (Lestat) or some alien power or just some good old fashion fairy godmother magic.

The Age of Adaline has a fairly interesting core idea but it is, for the most part, poorly explored. The drama of a woman dating a man whose father she also dated does not require the immortal plot angle. I am sure all kinds of soap operas have covered that one already. Her not aging as she lives through history should have been exploited for all it was worth. There are some things to enjoy here but I put this one down as a missed opportunity.