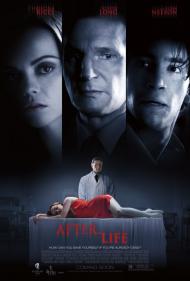 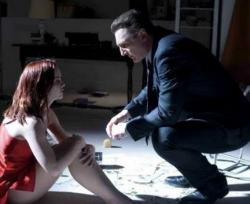 Christina Ricci and Liam Neeson in After Life.

After Life is one of those movies that is difficult to write about because it contains a twist in the central plot.  I will do my best not to give anything away, but if you haven't seen the film and want to know as little as possible about it, you should probably stop reading.  I'll just say, in case you're wondering whether or not it's worth watching to find out what the twist is, then I'd have to say probably not.  When you watch a movie that poses a question for its entire length, you want a solid and satisfying answer by the end of it and that's something this movie never provides.

Ricci plays Anna, a grade school teacher in a relationship with lawyer Paul (Long).  After they argue one night at a restaurant, Anna drives off during a rainstorm and ends up in a  car accident.  She then wakes up in the mortuary where Eliot (Neeson), the mortician, tells her that she is dead.  He explains to her that he has a gift that allows him to communicate to the dead and that while to him and her she seems alive, everyone else in fact sees her like a corpse.  The big question is whether or not she really is dead, or Eliot is just a nutcase, and will Anna figure out the truth by the time her funeral starts in just a few days' time.

The big problem with the plot is that it's blatantly obvious whether or not Anna is actually dead. It's easy to see which way the movie is going because the resolution is telegraphed way ahead of time.  It doesn't even take much observation to figure out the truth.  The real question is why Anna can't figure it out.

There are a few moments of suspense, but often instead of rooting for Anna, you're left screaming at the screen because of her stupidity.  She falls into several horror film cliches.

Ricci spends most of the movie in either a red silk slip or in nothing at all creating a disturbing quandary.  Should we really think she looks hot naked?  I mean, is she a corpse or not?  It's a quandary that doesn't bother at least one character in the movie.  Fortunately for the audience, in case you're wondering whether or not you should find her attractive, just remember that in either case, Christina Ricci herself is definitely still alive, so go ahead and gawk.

Another silly little plot hole in the story is that Eliot seems to be the only person working at the funeral home.  Apparently he dresses the bodies, does the flowers, the gardening, the cooking and the cleaning in this enormous and immaculate old house.  Of course, if a third person was around, then we would know right away whether or not Anna was dead, but it seems ridiculous to think that Eliot would be doing it all.

With a more clever script this movie might have been something good.  Instead, it just manages to hold your interest for a little while, but ends up being simply infuriating.  It's not scary or thought provoking enough.