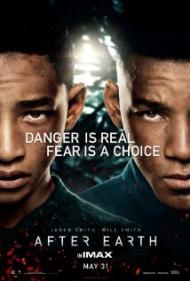 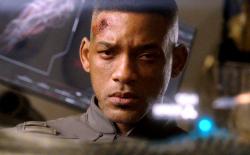 Will Smith in After Earth.

After Earth is another in a line of flops from director M. Night Shyamalan and a rare misstep from superstar Will Smith. It's a dull Sci-Fi film whose occasional action scenes can't make up for the awkward dialogue, lack of emotional resonance and inane plot holes.

The plot of the film is about as deep as a bad video game and often feels like one. Will Smith and his son Jaden, who was obviously hired because he is Will Smith's son, and not because of his acting ability, star as father son far in the future, 1000 years after humanity has abandoned the Earth. But wouldn't you know it, the spaceship that they're on crash lands on the Earth and is torn in half on entry into the atmosphere. Fortunately, and you might even say, coincidentally, Will and Jaden are the only two survivors. Unfortunately, despite all of the advanced technology that is still functioning on-board the crashed ship, only two devices can send a distress signal and the one at hand is broken, while the other one is located in the tail section some 100 kilometers away. Since Will's legs are broken, it's up to Jaden to make the journey to retrieve the device while Will stays in the ship monitoring him.

Once Jaden sets out on his journey the video game feel really kicks in to gear. He has to manage his inventory and traverse several levels until he battles the final Boss monster. If you ever watched someone else play a video game, you have some idea of the level of entertainment here. The script tries to add dynamic depth by creating some emotional conflict between father and son and by including some flashbacks wherein Jaden's older sister is killed, but neither the script nor the acting is good to enough to make you care about any of it.

When a movie is entertaining enough, plot holes can be overlooked or forgiven, but with little else to hold your attention, it's very easy to focus on them while watching this one. The biggest hole involves the main antagonist, which is an alien that apparently can only sense by smelling fear. If you feel no fear then it can't see you. Huh? Well, how does it see inanimate objects then? It must have some kind of sonar or radar to be able to walk around without stumbling into things, but for humanity it has a blind spot unless you're scared. Even accepting that such an improbable alien existed and that apparently it's able to travel through space on its own somehow, there are still problems. Instead of trying to come up with some way to alter the smell of our pheromones, or wearing spacesuits that would mask the scent, a silly philosophy is come up with (which some pundits have declared is a not so subtle reference to Scientology) wherein soldiers learn how to feel no fear. Another plot hole is the way the planet supposedly freezes every night to the point where Jaden will die from the cold unless he finds the few warm spots scattered throughout the planet. Just why this coldness happens is never explained and despite it, the planet is covered with vegetation and wildlife that never seem bothered by the cold at all. Surely the few warm pockets would be packed with wild animals every night.

There is the occasional action scene that momentarily generates some interest, but they never last for long. There's a visually nice one where Jaden glides down the side of a cliff while chased by a large bird. The whole scene is ruined later though when the bird saves Jaden's life at the cost of its own in the movie's most groan inducing scene, although the final, “Stand me up.” moment comes in a close second.

The acting is disappointing as well. Will Smith has made his career by being charming with a smile and twinkle of his eye. He's in full on serious mode, rarely displaying the slightest emotion. Jaden does get to show emotion, but the script is so weak and his acting abilities so thin that they never amount to anything.

Smith has generated enough goodwill over the years to cover this film, but surely it will be even harder for Shyamalan to get another one financed.

Jaden and Will Smith in After Earth

The philosophy of this M. Night Shyamalan scripted film sounds fascinating, “"Danger is real. Fear is a choice." It is reminiscent of Franklin D. Roosevelt’s famous line, “The only thing we have to fear is...fear itself.” Both lines are bullshit, but at least Roosevelt’s line was meant to inspire while M. Night Shyamalan’s is intended to be taken completely serious.

Will Smith says in the film that, “Fear is not real. The only place that fear can exist is in our thoughts of the future.” Fear is an emotional reaction that we do not have control over, hence those jump out of your seat moments in good horror films. To think you can block out fear is to think that you can witness your loved ones being killed and choose not to feel anger.

We cannot control our emotions, only how we act on them. Sometimes we can predict our fear, such as when we are about to get in front of a crowd. We cannot erase that fear by wanting to but we can learn to act as if we are not scared.  I know this is science fiction but human emotions are still at play in this film so the reality of the human experience must apply. Acting brave is not the same as not being afraid.

I dwell on this point as it is so very integral to the entire film. Cypher, somehow, has no fear and as such is invisible to the aliens. Perhaps because he has shut down his fear he has likewise shut down his other emotions. He treats Kitai more like a soldier than a son. Instead of asking his son if he is alright, he orders him to, “Do a physical assessment.”  His attaboy comes in the form of, “Good work cadet.” Cypher may be an alien killing machine but he is a cold father.

Taken as a simple adventure tale, you could do worse than After Earth. The pace and action is enough to keep you watching. If however, you decide to take any of this in the least bit serious, the entire film falls apart into more pieces than a crashed space ship. 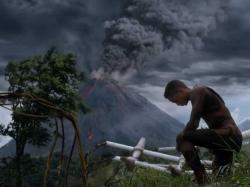 "Take a knee cadet." Jaden Smith in After Earth.

As Scott pointed out, After Earth is filled with plot holes in terms of the logistics of the story. Just where did these mysterious aliens go? How do these sightless creatures maneuver around inanimate objects? Why doesn't the ship have a more practical way of sending a distress signal? How do the indigenous mammals survive the freezing temperatures at night? Why can't M. Night Shymalan make another good movie? The biggest plot hole of all in my opinion was why the aliens that created these creatures to hunt humans didn't just give them the ability to see in the first place.

I disagree with Eric's assessment of the fear control idea though. In the same way that some exceptional people are able to control their heart rate, blood pressure, fidgeting, subtle eye movement etc., when taking a lie detector test it seems plausible that highly trained soldiers may figure out a way to control the physical symptoms of fear. “Ghosting” as it is called, is shown as something that is rare and very difficult to achieve (unless of course your last name is Smith). It isn't exactly a profound concept but it isn't that farfetched either.

After Earth is far from great but it is a fairly enjoyable sci/fi B-movie, although it certainly helps if you go into it with incredibly low expectations as I did. The fact is this is an easy movie to make fun of and many critics have had a field day piling on the insults. It isn't as bad as all that. Sure the setup is simple but not much time is wasted getting to the action. And it runs well under two hours, something rare in Hollywood in this day and age of bloated, overlong movies.

I didn't find Jaden's acting to be that bad. He's certainly not as awful as some critics have claimed. He did what the part called for, even when being heroic he always seemed like an immature teenager. Will Smith actually came off worse to me. His stoicism just comes across as wooden. He has yet to make the transition from cocky young star to mature middle-aged star.

One thing I am in one hundred percent accord with Scott about is the final ”Stand me up.” scene. Its awkwardly embarrassing sentiment is the very definition of maudlin. Not since the “Put your head right there.” moment from Stella (1990) have I heard such a cringe-worthy line of dialogue. I was going to give this movie 2½ stars but that line alone made me drop half a star. Still After Earth isn't quite the incredibly horrible flop (it took in nearly 100 million in world wide box office receipts) that it's been made out to be.