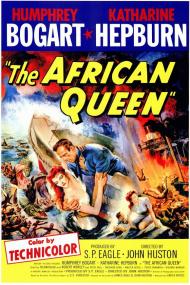 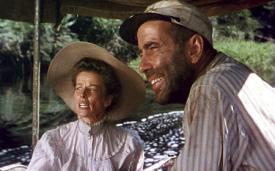 In 1953 director John Huston made a movie in Africa as an excuse to go on safari. It was the first color movie for Huston as well as its stars; Humphrey Bogart and Katharine Hepburn. Bogie drank heavily the entire shoot. Hepburn got dysentery. If that wasn't bad enough the real star of the movie actually sank and had to be raised twice during filming. I am, of course, talking about The African Queen.

Hepburn plays Rose, a spinster, British missionary working with her Minister brother in Africa during World War I. Upon the minister's death from German soldiers she hitches a ride down the river on The African Queen. It's an old steam engine with a drunk behind the wheel. The drunk is Charlie. He burps, swears, drinks and offends Rose by just being himself. "Please Miss," he begs Rose, at one point, who is pouring out his liquor. "It's natural for a man to drink." "Nature," Rose responds, "is what God put us on this Earth to rise above."

They are morally opposite. But they fall in love amongst the waterfall, leeches and gunfire. Together they attempt to sink a German ship, The Louisa, by ramming her with the African Queen carrying home made torpedoes.

Bogart and Hepburn are two of the best actors and greatest movie stars of all time. Their chemistry together is phenomenal. His rough Charlie softened by her delicate Rose. Her innocent Rose made worldly by his experienced Charlie.

This movie is remembered so much for the adventure aspects, yet I feel it is the love story that makes it so enduring. The scene of the morning after, when Rose realizes she just slept with a man whose name she doesn't even know is humorous as well as romantic. My favorite part is at the end when they are about to be hung and Charlie asks if the German Captain would marry them before they get executed.

This film has a couple of minor flaws. The special effects when all the bugs attack is lousy and the score is sometimes overdone. Still, this is a classic among classics. The African Queen has adventure, romance and two of the most incredible movie stars Hollywood has ever seen. 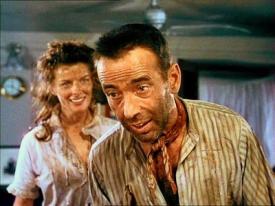 The African Queen, the movie that won Bogie an Oscar and gave Hepburn the model for nearly every character she would play for the next forty years, is one of those rare classics that is above reproach. Sure the special effects are dated; it remains a gloriously entertaining strip of celluloid. The two legends are indeed perfect together.

Bogie had spent the thirties playing supporting roles at Warner Brothers, often playing second fiddle to Jimmy Cagney in several gangster pictures or to Bette Davis in one of her many melodramas from the period. It was not until 1941's The Maltese Falcon that he would 'arrive' as a full-fledged star. He would, of course, go on to make classics like Casablanca, The Big Sleep and Treasure of the Sierra Madre before taking on the role of Charlie Allnut.

Hepburn, on the other hand, was an instant sensation with her first few movies, winning the first of her record four Best Actress Awards in 1933 for Morning Glory. She would fall out of favor a few years later but come roaring back with a string of comedies costarring Cary Grant and then launch into her successful series of movies with Spencer Tracy starting in the early forties. Unlike Bette Davis (her chief rival for greatest female movie star of all time status) she rarely carried a movie on her own.

At the time they made The African Queen both stars had ripened with age like a fine Port. The script brilliantly makes use of the chemistry between them by taking advantage of the dichotomy of their personalities, much like Redford and Streisand in the equally memorable The Way We Were. He is coarse and a drunkard but we know that underneath lurks a brave and honest heart. She is prim and judgmental but we know this shields a passionate and athletic personality. As Eric pointed out the differences between them compliment each other and enable each to grow into a better person.

All of this is merely subtext to a fast paced, riveting action adventure. My favorite scene of the many memorable moments in this movie is when their boat gets stuck among the thick reeds. Physically exhausted and unable to tell where they are they lie down and give up. The camera then pulls back to reveal that after everything they have been through they are only yards away from the open lake.

If you don't like old movies this is the one to change your mind. If you have never seen The African Queen get ready for a cinematic treat. 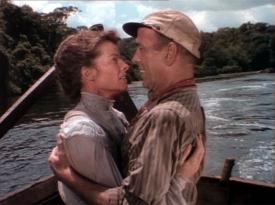 Patrick is correct when he says that people who aren't normally fans of old movies can enjoy The African Queen. Speaking as someone who prefers movies made in the modern era to those made pre-1970, I can say this with some surety. In fact, when I watched it again recently, the one thought that ran through my head was how timeless this story has remained.

As both Eric and Patrick pointed out, the special effects are bad in points, but that's such a given that it hardly bears mentioning. What movie made in that day and age, doesn't look dated? But the adventure, the romance, and the characters are completely timeless and in some ways even modern.

How many women were the stars of an action-adventure movie in 1951, in any other way than to play the girlfriend of the hero or as someone to be rescued by the male lead. In The African Queen, Rose and Charlie are equals who both support and lead the other on in their quest to sink the Louisa. Rose does her share of the action and without ever pounding some overly stated idea of feminism. She simply is a strong character.

One aspect of this movie that neither Eric nor Patrick mentioned is the comedy. There are some truly funny moments. My particular favorite is when Charlie attempts to scare Rose by taking the boat over the rapids. Instead of frightening her, she is thrilled. "I never dreamed that any mere physical experience could be so stimulating!" she says afterwards.

I don't know that this movie can change your mind about enjoying older movies, since as I see it; this movie is the exception and not the rule when it comes to old movies, but without a doubt, everyone can enjoy this movie.