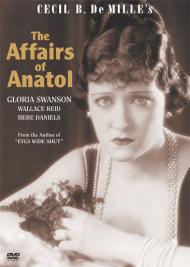 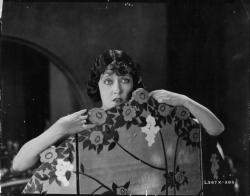 Gloria Swanson in The Affairs of Anatol.

While D.W. Griffith (with muse Lillian Gish) was creating the historical epic with such landmark movies as The Birth of a Nation and Intolerance, Cecil B. De Mille was busy developing Hollywood sophistication, decadence and glamour in a series of 'bedroom' dramas he made with star Gloria Swanson during the late teens and early twenties. One such movie is The Affairs of Anatol.

The De Witt Spencers, a young, newly married, upper-class couple (Gloria Swanson as Vivian and Wallace Reid as Anatol) enjoy an evening out atThe Green Fan, a glitzy Manhattan nightclub. Unfortunately the kindhearted Anatol runs into Emilie Dixon, his childhood sweetheart from Pompton Lakes, New Jersey, who is now the flapper-toy of an older rich man. He soon puts his marriage at risk by trying to 'save' the girl from a life of sin. When his social experiment ends in disaster the De Witts try to patch things up by taking a second honeymoon in the country. Anatol is soon up to his old tricks, this time getting involved with the suicidal wife of a self-righteous preacher. Finally he decides to give everything up for a life of hedonism in the arms of Satan Synne (the wickedest woman in New York) only to discover that she is a closet sentimentalist trying to raise money for her invalid husband. He rushes back to Vivian but is it too late? Has she already fallen for the charms of best friend Max?

Never before had the American public seen glamorous people living in such opulence. Never before had they seen independent women drinking, smoking and showing off so much skin. The sets are magnificent, some of the scenes are meticulously hand-tinted and the costumes are more extravagant than anything seen since. Emilie wears a beaded headband; Satan Synne sports a tiara and cape of pearls in the shape of an octopus, and Gloria Swanson as the pouty, spoiled Vivian demonstrates why she was known for her stylish ability to wear anything.

Silent movies rarely had all-star casts. The studios considered it foolish to 'waste' more than one star on a single movie. The Affairs of Anatol is a happy exception to this rule. Although Swanson is the only one remembered today Wallace Reid, Agnes Ayres, Bebe Daniels, Monte Blue and Theodore Kosloff (who appears intermittently as a Hindu hypnotist) were all big name stars at the time.

De Mille's moralizing is certainly dated, and the movie runs at least twenty minutes too long, still it is worth watching for the elegant stars of yesteryear in extravagant scenes of epic debauchery as only one of cinemas two greatest geniuses could have created. 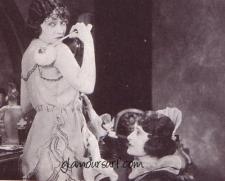 Gloria Swanson in The Affairs of Anatol

This is a tale of morality based on a one act play called "Anatol" written by Arthur Schnitzler. John Barrymore starred in it on Broadway in 1912.  Here Wallace Reid plays Anatol as a pious moron. He wants to save these different women, but he does it at the expense of his wife. It ends up being he who learns a lesson, and not the women.

At two hours, this silent drama is a bit of a chore to watch. Swanson is the big star here, but she gets far less screen time than Reid, who is not all that great of an actor. He poses and pouts, and comes across as an ignoramus. I actually wanted to see him fail.

Original reviews for The Affairs of Anatol were not good.  In their 9/12/1921 edition of The New York Times, the reviewer wrote, "Here is Mr. DeMille at his best. Whether you will like it is another matter."   For the cast, they wrote, "Wallace Reid, as Anatol, farces some of his scenes delightfully...Gloria Swanson is decorative, ... and Bebe Daniels does one of the best mock-vampire acts."

The harshest criticism came from the September 1921 issue of Motion Picture Classic. "Nothing left of Schnitzler but the title. The subtle craftsmanship, the sentimental melancholy and the humorous cynicism have given place to crudity and even clumsy vulgarity. We look upon "The Affairs of Anatol" as the worst massacre since Custer's forces were wiped out by the redskins. The silken DeMille is certainly running riot."

Although it may have fallen hard on critics, It still had something to offer.  There is a funny scene when Reid and Swanson go into the country. After pulling a girl from a river, Swanson and Reid make ridiculous attempts at administering first aid. Neither has a clue what they are doing.

As Patrick wrote, the sets and costumes are all detailed and elaborate. According to the book, “The Movies,” by Richard Griffith and Arthur Mayer, Simon and Schuster, 1957; the sets from DeMille’s movies, as well as Swanson’s clothes and hair, were very influential to the styles of the time. 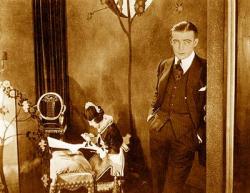 Wallace Reid in The Affairs of Anatol.

I've probably watched more silent films over the past year than I've watched in the rest of my life before that combined. While I still can't claim to be an aficionado of the art form, I do have a greater appreciation for it now. Despite that though, like Eric, I too found this movie to be a chore to watch. Patrick you say that it's about 20 minutes too long, but I say it runs over by at least an hour.

Eric, the fact that Anatol is the one who learns the lesson, is rather the point of the movie. He's a complete hypocrite who wants all the women he meets to be innocent, except for when it comes to loving him of course. He wants Emilie to give up her jewels and swear off men, remaining at his beck and call, although naturally he doesn't want to leave his wife for her. He's more than happy to kiss the farmer's wife without telling her that he's married and then he complains that he can't find anyone who's innocent.

Ironically, it is Satan Synne, the supposedly most sinful woman in New York, who turns out to have the purest motives. As such, she is the most interesting character in the story. She will do whatever she needs to do to save the life of her husband. Her elaborate persona is entertaining, and probably at the time quite shocking.

I didn't find Reid to be such a bad actor. I believe Anatol is supposed to come across as foolish and hypocritical and Reid conveys that. Swanson does manage to steal her scenes from him however.

As is often the case with these older movies, I learn more interesting things reading about the movie than I do from actually watching it. Reid, was only 28 years old when this movie came out and yet he would be dead in just 2 years. It seems that in 1919, while filming, he was injured in a train wreck and became addicted to the morphine he was given for the pain. Reportedly, Swanson was so frightened of his addiction that during the filming of this movie, she stayed away from him except when they were in front of the camera. He would die in a sanitarium while attempting to break his addiction in 1923.

Eric, you mention the funny scene where Anatol and Vivian attempt to revive the drowned girl. I agree that it's amusing and in fact, this middle section, when the two of them visit the country, is the most entertaining portion of the whole feature. With just a few new title cards you could lift that section out and show it on its own as a short.

The Affairs of Anatol has its moments and there's plenty of opulence on display, but it's not a film I can ever imagine wanting to watch again.