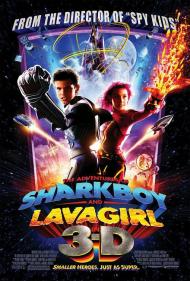 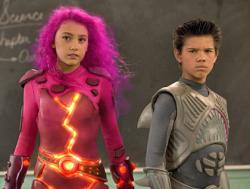 Taylor Dooley and Taylor Lautner in The Adventures of Shark Boy & Lava Girl.

Like a lot of young boys, Racer Rodriguez has dreams about superheroes, but while other boys draw up home made comic books or write stories about them, he has movie director Robert Rodriquez (Spy Kids, Sin City) for a father who can turn his dreams into a live action film. The result, The Adventures of Shark Boy and Lava Girl in 3-D, turns out to be one of the most expensive presents a father ever gave a son, a thrill for Racer no doubt, but only marginally entertaining for everyone else.

The movie tells the story of Max, a young boy who, according to all the adults around him, spends too much time dreaming. He even keeps a dream journal detailing all of the many and varied dreams he experiences. His favorite dreams feature his two heroes, Shark Boy and Lava Girl, who live on the planet Drool (cause it's so cool it will make you drool, according to Max). When Max decides that maybe his life would be better without his dreams, Shark Boy and Lava Girl show up in real life to ask Max for help in saving them. Soon he is whisked off to the planet Drool for some wild and wooly adventures.

As you've no doubt guessed from the title, the movie's in 3-D. There's been some talk lately about the revival of 3-D as a means of offering something that you can't get anywhere else. Personally, I've never found it to be anything more than a gimmick. But most importantly, so long as you have to wear those stupid cardboard glasses, it's never going to be anything other than an oddity. In this film, where only Max's dreams and the Planet Drool is in 3-D (which means putting on and then taking off the glasses several times), the 3-D fails to add another dimension to the story, it simply distracts you from it.

In fact, if this movie wasn't in 3-D, it might have turned out better. There are some interesting ideas in it, but instead of exploring them in any kind of depth, it opts for splashes of milk shooting out toward the audience. But given the age level they were aiming for with this story, avoiding depth was probably a deliberate move by the filmmakers.

If you don't mind wearing the glasses and you have young children, you might find some things to enjoy this movie. If not, stay away. 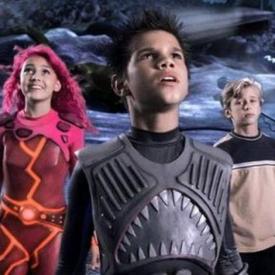 It does indeed contain some interesting ideas. This movie could have easily been educational as well as entertaining. On the surface, this is a children's fantasy/adventure story. Underneath, it is an introduction to philosophy 101.

The problem is that it is like reading the class description instead of actually taking the entire course. The lesson of the movie is reinforced through out the film. The movie opens with a quote from Lava Girl, "Everything that is or was began with a dream." The final line is, "So dream a better dream, then work to make it real." This is all very interesting and positive. However, any episode of Barney teaches the same lesson.

The Adventures of Shark Boy and Lava Girl introduces philosophical terms. A river is named Stream of Consciousness and a flying train is called Train of Thought. Yet it never fully defines the terms so the whole point is lost on children. I am not suggesting Rodriguez should have turned this movie into a lecture, but having Shark Boy or Lava Girl give a definition to some of these terms, in passing, could have added greatly to this movie. It would have educated children without them even knowing they were learning something.

As a fantasy/adventure story, the movie works well enough for kids. My 11 and 9 year old enjoyed it. The pace is quick and most children can probably relate to Max's problems at school. However, the movie is, as Scott wrote, really only for children. The bad guys are only threatening to kids and the computer generated world is far to fake to take seriously.