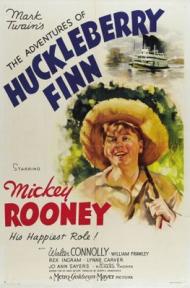 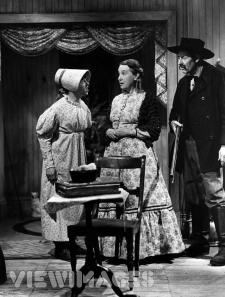 The Adventures of Huckleberry Finn is proof that not all movies made in 1939 are great. MGM produced this version of Mark Twain’s classic 19th century novel. They played fast and loose with the plot; even changing the entire third act.

Huck’s Pap demands 800 dollars from the Widow Douglas and Miss Watson (played by Clara Blandick, remembered today as Auntie Em in The Wizard of Oz which just happened to be released this same year). No mention is made of the treasure Huck and Tom found in “The Adventures of Tom Sawyer”. In fact Tom is completely absent from this movie. Huck does run away from his Pap’s cabin and fakes his own death like in the book. He then meets up with Miss Watson’s runaway slave Jim out on Jackson Island. Jim tells Huck that he ran away because he heard Miss Watson saying she had to sell him to make some money. In the movie it is for the 800 dollars for Huck’s Pap.

Anyway Huck and Jim have a few adventures before meeting the Duke and the Dauphin, two of the most obvious flim flam artists ever. Of course the naïve boy and uneducated slave take them at their word at first, until it becomes obvious even to them. Walter Connolly and William Frawley are good playing these two old charlatans but the movie gives them both too big a part at the expense of other characters from the novel.

After the fake royalty have been exposed as frauds the movie takes a big turn from the book. The entire final section which takes place with Tom Sawyer is replaced with Huck trying to help Jim escape. Of course it ends happy with Jim free and Huck back with the Widow Douglas promising to go back to school.

This is one novel that should have been made in Technicolor and been an epic. MGM’s decision to trim it down to 90 minutes was a big mistake. And although I am a huge Mickey Rooney fan and I think he is good in the part, it really should have been played by an unknown. Rooney is just so famous that I couldn’t help seeing him instead of the character. Or maybe this is just one of those books that should never be done as a movie.