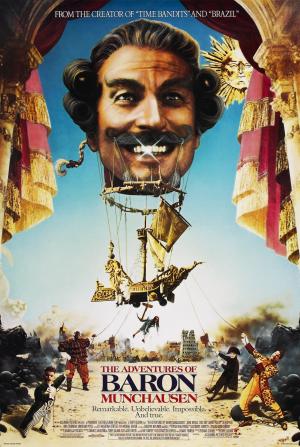 My brother Scott and I first saw The Adventures of Baron Munchausen upon its initial theatrical release. Neither of us were too impressed. Only a few moments of it stayed with me. First is Sting's cameo appearance. His scene provides a dark, yet hilarious, joke. The second one is the appearance of Uma Thurman as Venus. She shows up completely nude, doing an imitation of the 1486 Sandro Botticelli painting Nascia di Venere (Birth of Venus). This was, in fact, Thurman’s very first film role. Since the movie ran in to so many problems during production, post production and in its release, she had other films come out before this one.

The Adventures of Baron Munchausen tells the tall tale of said character and his group of odd, super powered companions. It is framed around a play about him being performed in a city under siege by the Turkish army. The battle scenes are all very realistically depicted but they clash greatly with the fantastic adventures that Baron Munchausen consequently experiences.

To save the city, he steals away with a little girl, on a balloon made of ladies undergarments. They intend to find help but get sidetracked by the king of the moon. Robin Williams reportedly ad-libbed most of his lines as the moon king. I am not sure if this one was written or made up, but I like it, “No, let me go! I've got tides to regulate! Comets to direct! I don't have time for flatulence and orgasms!”

The Baron and the girl run into some Greek Gods. After flirting with the Baron, Venus yells “I am a goddess! I can do what I like!” Vulcan then bellows, “And I am The God, so shut up!” Later, they get swallowed by a giant sea monster, Eric Idle asks, “Is there a doctor in the fish?” The images of those scenes are all quite imaginative and wondrous to look at. This is Terry Gilliam in his comfortable creative element.

With all of his imagination comes a tendency to be long winded. For a film with such light hearted whimsy it should have ended a half an hour earlier than it does. There is truly no tension to ever speak of and the plot is nearly pointless and makes no sense. Gilliam is a fantasy director and he seems to get lost in his own creativity. Much could have been trimmed, such as the beginning and end. Jonathan Pryce describes the Baron at one point with a criticism that could easily apply to Gilliam as well, “He won't get far on hot air and fantasy.”

The Adventures of Baron Munchausen is an often interesting watch and sometimes genuinely funny. It is however, all show and no substance. The little girl asks the Baron, “It wasn't just a story, was it?” Dorothy knew hers was a dream but she at least learned a lesson. All the girl gets from the Baron is a wink and a smile. 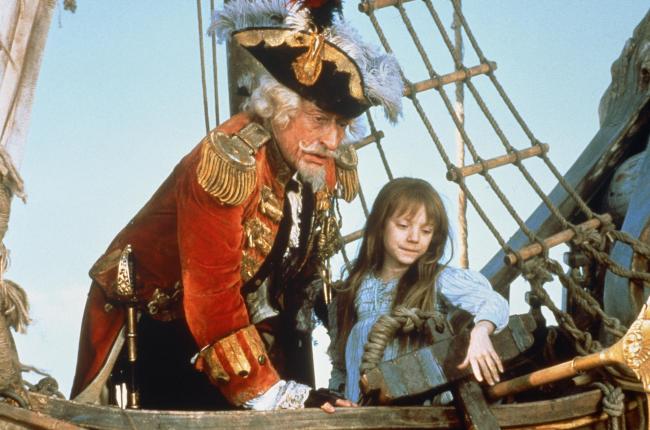 John Neville and Sarah Polley in The Adventures of Baron Munchausen.

Gilliam has referred to this film as the third in his "trilogy of the imagination" after Time Bandits and Brazil. Each of these films features a protagonist who escapes from reality via fantasy and dreams, with each of them told from a different stage of life, that of a boy, a man, and an old man respectively. It's easy to see something of Gilliam in these characters.

Many of the lines said by or directed at Baron Munchausen could apply to the director as well. There's the line Eric mentioned that many a critic has applied to Gilliam, but also these spoken by the Baron himself, which seem to reflect Gilliam's philosophy. "Your reality, sir, is lies and balderdash and I'm delighted to say that I have no grasp of it whatsoever." and "I'm tired of the world and the world is evidently tired of me. Because it's all logic and reason now. Science, progress, laws of hydraulics, laws of social dynamics, laws of this, that, and the other. No place for three-legged cyclops in the South Seas. No place for cucumber trees and oceans of wine. No place for me."

Until The Man Who Killed Don Quixote this was Gilliam's most troubled production although there are conflicting reports over just how troubled it really was. It's usually reported that the film was budgeted at $23 million, but cost $46 million, although Gilliam has denied both numbers. In any case, it only earned $8 million, in part because Columbia, which produced the film, was in the process of being sold and only ever issued 117 prints. Many of the cast have described the difficulty of working on the film, with Gilliam's fellow Python Eric Idle saying, "Up until Munchausen, I'd always been very smart about Terry Gilliam films. You don't ever be in them. Go and see them by all means - but to be in them, fucking madness!!!"

Like Eric, I remember seeing this movie with him in the theater and being disappointed by it. Seeing it now however, for the first time in many years, I rather enjoyed it. I definitely agree that it needs a tighter edit, but Gilliam's imagination and the lighthearted sense of adventure make for an entertaining experience. Gilliam creates many memorable and iconic visuals and perhaps he was reluctant to remove any of them. I also agree with Eric that the ending becomes a bit muddled. As with Time Bandits and Brazil we are shown an ending, but are then left wondering if any of it was real. However, I disagree that there is no substance to the movie. There is a message to this film, even if it's not overly deep. Gilliam is making a statement about the importance of imagination and the place of the artist and the dreamer in a world of reason and conformity.

Williams appearance as the King is one of the film's most famous sequences. He was a last minute replacement for Sean Connery, who was first cast as King of the Moon, but he dropped out when the part became obviously more comic. He and Gilliam had previously worked together on Time Bandits. Williams took up the part as a favor to Gilliam. However, it is the image of Uma Thurman as Venus on the half-shell that is the most memorable. She is perfectly cast as the goddess of beauty.

This is a flawed film, as so many of Gilliam's films are, but it is so visually rich that it's still worth watching. It is also funnier than I remembered it being, with several laugh out loud moments. Far from perfect, there's still some magic to be found here. 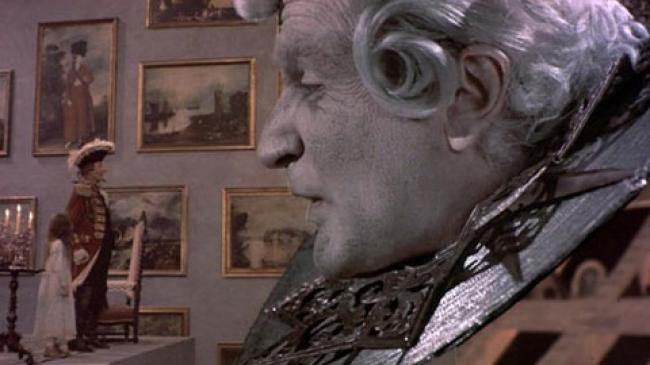 Unlike my brothers, I had never seen The Adventures of Baron Munchausen. Therefore, I had no memory to compare it to. I will say that watching it for the first time more than a quarter of a century after its initial release, I enjoyed this wildly imaginative and whimsically wacky motion picture quite a bit. Terry Gilliam is a bit of an acquired taste but, as both my brothers have noted - here and in other reviews, his films are always -at least occasionally- visually spectacular. Baron Munchausen is certainly no exception to this rule. The special effects in this pre-CGI movie hold up quite well, especially during the surreal scenes set on the moon; with a wickedly funny Robin Williams stealing every moment he's onscreen.

From the opening captions, which read sequentially, “Late 18th Century." "The Age of Reason." "Wednesday.” the Python-esque tone of the humor is set. Besides Robin Williams, the Baron gets most of the funniest lines. My brothers quoted several of them. One of my favorites is a repeated line, used whenever the Baron is in danger. “I have learned from experience that a modicum of snuff can be most efficacious.” Indeed it can if you are the magical Baron Munchausen and you find yourself stuck deep inside the belly of a giant sea monster.

Sure The Adventures of Baron Munchausen is flawed and could use a tighter edit. On that we all agree. But I'm closer to Scott than Eric on this one. I was able to enjoy the magic of this movie despite the sometimes muddled storyline. The performances are all appropriately over the top, which helps. And, although I'll never know for sure, I'm curious what my opinion of this movie would have been back in 1989 if I'd seen it with my brothers. I have a feeling that, like Scott, I'd be more able to appreciate it now than I would have then. I find myself getting less critical and more forgiving in general as I get older. I guess that's what they call mellowing with age.

I'll end this review with my favorite quote of the Baron's, which is when he very honestly states, “Everyone who had a talent for it lived happily ever after.” Let's be honest, happiness is a talent that eludes many people. 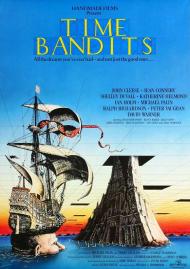 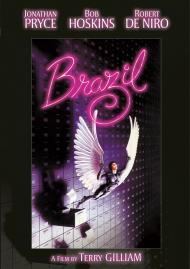