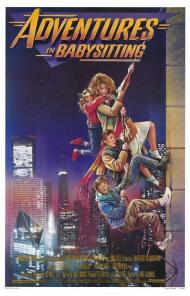 Suburban kids lost in the city in Adventures in Babysitting.

Adventures in Babysitting marked the directorial debut of Chris Columbus. He had previously written screenplays (Gremlins, The Goonies) and has since gone on to direct the Home Alone movies, Mrs. Doubtfire and the first two Harry Potters (among many others), but this was the very first time he took the helm of a motion picture. The result is this classic 80s comedy.

Elisabeth Shue stars as a high school senior named Chris living in a Chicago suburb. When her boyfriend cancels a date at the last minute she takes a job babysitting two kids. A call from her friend Brenda, who has chosen this night to run away from home and is stranded at the downtown Chicago bus station, sets off a night of adventure none of the participants will ever forget.

The humor is quite silly (check out the bus station scenes that make it look like Chicago is populated by nothing but freaks and weirdos). When Brenda calls Chris from a payphone she tells her, “Chris I'm begging you, it's really scary here. I've just seen three people shoot up, a bald Chinese lady with no pants on, and there's this old guy outside who wants his bedroom slippers!”

The children she is babysitting are a high school freshman named Brad, played by Keith Coogan (Jackie Coogan's grandson) who has a crush on Chris, his little sister Sara, who is obsessed with the comic book superhero Thor, and Brad's nerdy friend Daryl, played by Anthony Rapp making his movie debut. These suburban kids have no idea how to survive in the urban jungle and quickly find themselves being chased by car thieving gangsters.

Adventures in Babysitting is a fun ride from start to finish while at the same time being a wonderful time capsule of the late Reagan years. The most memorable scene is where our young heroes are being chased by the bad guys and they wind up on the stage of a smokey little blues club. The lead singer performing on stage tells them that before they can leave they must sing the blues. Another funny scene occurs on the El Train when they find themselves caught in the middle of a gang fight.

If you've never seen Adventures in Babysitting what are you waiting for? If it's been years since you last watched it I highly recommend checking it out again soon. You won't be disappointed.

Vincent D'Onofrio and Maia Brewton in Adventures in Babysitting.

Adventures in Babysitting feels like a lost John Hughes movie. An eighties' comedy about teenagers, set in Chicago? The only thing missing is Molly Ringwald. Okay, so maybe this one doesn't quite have the heart of the truly best John Hughes film, but you can see Hughes influence. There are certainly similarities with his Ferris Beuller's Day Off, with a group of teens running around Chicago trying to avoid parents and trouble. Director Chris Columbus has listed Hughes as one of his biggest influences and the two would go on to work together on the Home Alone films.

As Patrick wrote, the humor is very silly. I would add that much of it is also implausible, but those are actually two of the movie's biggest strengths. A simple pick-up from the bus station turns into a surreal night of gangsters, chases, escapes and even a walk on the side of a building high above the city. Although one of the strangest sights of all is when a youngish, muscular Vince D'Onofrio with long, flowing blonde hair, shows up for a small part at the film's climax in one of his very first roles.

The thing about the film's humor is that it knows it's being silly. And despite a Playboy and some very, very mild sex talk, it's also a very innocent film. This is the wild side of Chicago as seen through the eyes of a group of suburban teenagers. One of the only traces of adult language comes in the most famous line when Elisabeth Shue's character proclaims, "Don't fuck with the Babysitter!"

The young cast is quite good. This was Shue's first starring role and she makes a likable lead. Penelope Ann Miller is funny as the overly dramatic Brenda stranded in the bus station filled with loonies. Anthony Rapp would go on to work with director Columbus again in the film version of Rent, which Rapp starred in on Broadway and in the film. Coogan had a brief flirtation with stardom in the 1980s and continues to work today in small parts. Little Maia Brewton, who played the Thor-obsessed Sara gave up acting and graduated from Yale to become an attorney. All of them shared a nice chemistry and it's easy to root for them to make it out of the city alive, although naturally that's never really in doubt.

Although it is a dated film by its hair, fashion and cars; the innocent humor and sense of fun behind it still works over 25 years later. It's that sense of lighthearted fun that makes it so easy to forgive this movie any of its flaws. There was talk recently of a remake, but it seems to have fallen by the wayside, which is probably for the best. It would be hard top or even equal the original.

I had the same thought Scott. Being that this is an eighties' comedy about teenagers in Chicago, I assumed I would find John Hughes somewhere in the credits. These kids could have easily been Ferris Bueller’s neighbors and Chris a classmate of Claire Standish.

Again referring to my brothers, the comedy is very silly and implausible. The story is one of middle class suburban kids lost in the asphalt jungle of a Chicago night. The kids meet and deal with thieves, a prostitute and gangsters but we never truly fear they are in any actual danger. One of their first scary moments occurs when their car breaks down on the highway going into Chicago. A creepy hill billy looking man stops and approaches them. The little Thor loving girl grasps her plastic hammer and says to the teenagers, “Everyone stand behind me.”

These are three fair haired middle class Caucasian youths and a ginger. You could not find four whiter kids if you visited Salt Lake City. Their trip to the city is like a visit to a foreign country. Although many of the characters they run into are white, the car jacker is black, as is one of the men running the stolen car garage. His boss seems to be from some Eastern European, Soviet bloc country. Brenda has her glasses stolen by an old black bag lady. The four are forced, by a black musician, to sing in a blues club attended by an almost entirely black audience. The two gangs on the train are made up of dark haired boys of different ethnicities. Even the doctor, who puts a stitch in Brad’s foot, has a Middle Eastern accent.

I am sorry, but the racial makeup is so obvious here it is almost laughable. They go to a fraternity party, a fancy restaurant and a formal party, where nearly everyone in attendance at those locations is white. With his long flowing blonde hair, Vincent D'Onofrio could not look more Aryan if he tried, and seriously, is there a whiter superhero than Thor? These kids do not visit a city, they go to a foreign country.

Adventures in Babysitting is a fun watch but not fun enough that it distracted me from the overt stereotypes. Even though the black car jacker ends up helping the kids, and skin color is never actually mentioned, I found this to be a very racist film. If you think I am stretching, picture this film remade with four African Americans youths lost in Laredo Texas. How racist would that be considered? Replace the ethnic actors with Jewish actors and Joseph Goebbels could have used this as a Nazi propaganda film.