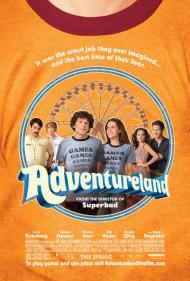 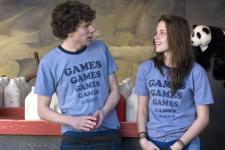 More of a coming of age love story than an outright comedy, despite the marketing.

I remember as a kid in the 1970s how the 1950s seemed to be a popular era for movies and television with the likes of American Graffiti, Grease and Happy Days. Now that my generation is entering its 40s, it seems that the 1980s are becoming popular entertainment fodder in the same way that the 1950s were back then. Adventureland, which takes place over the summer of 1987, certainly makes good use of the decade with its nostalgia-fueled soundtrack.

Although its being promoted as a comedy and as from the director who brought you Super-bad and most of the previews highlight the jokes, this is actually much more of a coming-of-age story with some humor mixed in than a straight out comedy. And it's vastly different than Super-bad. Anyone expecting that "McLovin" style of humor will be very disappointed.

Jesse Eisenberg (The Squid and the Whale) plays James Brennan, a pretentious young man who just graduated from college who plans on attending Columbia University for his graduate work. Unfortunately for him, his father just got demoted and the money isn't there to pay his way to Columbia, let alone the summer trip to Europe he wanted. Instead, he ends up working at the local amusement park in Pittsburgh, PA, called Adventureland. He makes friends, gets drunk and high a couple of times, but mainly he falls in love with Em (Stewart), an emo type girl who is secretly having an affair with the Park's married maintenance man played by Ryan Reynolds. The course of the movie takes place over the summer.

Rarely is the movie laugh-out-loud funny, but that's because it isn't trying to be. This disconnect between the marketing and the script could end up hurting the movie. Nearly all of the movie's funniest scenes involve Bill Hader and Kristen Wiig who played the married couple who run the amusement park. Hader in particular is very funny. Overall though, the humor induces more chuckles than belly laughs.

A lot of movies set in the 1980s tend to exaggerate the time period. Adam Sandler's The Wedding Singer, for instance, really plays up every stereotype about the decade. Here though, it's almost underplayed. Apart from the music and just a few of the characters costumes, it's hard to pinpoint the year. With the gift of hindsight it's easy to see the fashion faux-pas's of those years, but here most of the outfits, Kristen Stewart's in particular, wouldn't look that out of place today. Only Lisa P., the hot girl of the park really dresses in over-the-top 80s fashions. A lot of the songs here though, including "Rock Me Amadeus" which is played constantly at the park to the annoyance of James, will whisk you straight back in time.

The coming-of-age genre has to be the most over-used genre of all time. I mean we've seen it countless times in books and movies. While this is a good enough example of the type, it doesn't really bring that much new to the table. It's sweet and nostalgic, and very enjoyable in parts, but it's never wow-inducing.

I also found the ending of the movie felt a little tacked on. I assumed the movie would end with the summer and it does with a kind of bittersweet, but somewhat realistic feeling. But then there's an epilogue that takes place after the summer that felt like a Hollywood ending and it weakened the story for me.

Despite not being the comedy it's advertised to be, Adventureland is still a nice little movie, with a talented cast and a great soundtrack. 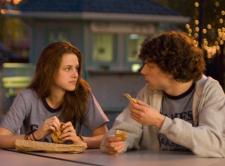 Kristen Stewart's charm has always been lost on me. She seems like a muff diver made up to seem straight. All of the tabloid fodder over her supposed romance with Twilight co-star Robert Pattinson is such over-kill that it is laughable. Recent pictures on the net of her holding hands and canoodling with female Twilight co-star Nikki Reed seem to suggest that my opinion of her may hold water.

I comment on her sexuality because it takes away from her attractiveness. She has nice long hair and all of the physical equipment of a beautiful woman, but none of the femininity. She moves like a boy, and as in most of her films, dresses like one. What is worse, is that she never fucking smiles. She almost always comes across as miserable. She is one of the least appealing actresses working today.

With that said, I had little interest in Adventureland. James falls for Em because she helps him out with a rowdy customer. She gives him a couple of boners, but no sex. After all, Em has standards. She only fucks married men. In that is my problem with this movie. I did not want James to end up with Em. With all of her parent issues and constant drinking, she would only cause him problems.

The one thing I respected about this coming-of-age film was that, at first, it was about James learning to understand human relationships and emotions he had never explored before. But as Scott mentioned, the final scene where he loses his virginity seems tacked on. The film should have included an additional scene, after they have sex, where they break up for good. Seriously, this pot smoking, alcoholic slut, with lesbian tendencies, would only bring heartache to James. He deserves better. 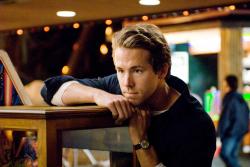 Ryan Reynolds as Mike Connell goes from admiration to pity in Adventureland.

Geez Eric, how do you really feel about Kristen Stewart? You’ve got to learn to stop being so wishy-washy in your opinions.

I completely get why James falls for Em, she’s attractive and intelligent and she gets his sense of humor. When he tells Em about his dreams of traveling and writing (like Charles Dickens), she understands. By contrast Lisa P is sexy but dimwitted. Later on James starts to tell her about his plans and she interrupts him with some inane comment about boats. James is naïve enough to not see just how fucked up Em is.

I found the Ryan Reynolds character to be the most fascinating. He is one of those guys whose life probably peaked in high school. At the beginning of the summer he is admired by everyone at Adventureland because he once (allegedly) jammed with Lou Reed. Admiration turns to pity by the end of the summer as he is revealed to be a pathetic womanizer who doesn’t even know the actual title of a Lou Reed song.

The acting and the script are quite good. The dramatic moments are balanced well with the comedy. And the nostalgia evoked by the soundtrack was palpable for me. I turned 20-years-old in 1987 and I can’t count the number of times I danced to Expose’s “Point of No Return”.

Adventureland is realistic in its portrayal of James. He is weak and innocent and his actions at the end are somewhat annoying, but believable. I agree that this “Happy Ending” feels like a cop out. I give their relationship in New York City approximately two weeks.