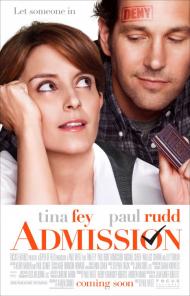 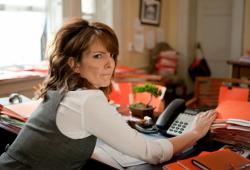 As a big fan of both Paul Rudd and Tina Fey, I had high hopes for Admission. Rudd has slowly moved from reliable second banana to being a consistently funny actor who can carry a movie on his own. While Fey has yet to have that one big movie hit, her 30 Rock was one of the funniest shows on television for many years. With those two as the leads and a stellar supporting cast, this movie should have been a slam dunk. Unfortunately, the script isn't as strong as the cast.

Fey stars as Portia Nathan, an admissions officer at Princeton. Her carefully structured life is disrupted by the abrupt departure of her longtime boyfriend (Michael Sheen in a small, but funny part) and the intrusion of John Pressman (Rudd), who wants her to meet one of his students, who he believes is the son Portia gave up for adoption many years ago.

This main portion of the plot, with Portia becoming caught up in the life of Jeremiah, whom she believes is her son, feels very contrived and almost sitcom like. It also never rings true or evokes much of an emotional response. Sadly, this is the largest portion of the plot and so the story is doomed from the start.

The script also seems to want to say something about the admissions process of Ivy League schools, but exactly what is never laid out clearly. Portia works to try to get Jeremiah a position at Princeton, despite his almost entirely absent interest in academia. He's shown to be intelligent, but flighty and the argument seems to be that even if he doesn't fit into the typical Princeton mold, he should still be allowed to attend. No mention is ever made of how he or his parents will pay for his education.

While Rudd and Fey are both talented and they seem very relaxed around each other, they aren't the world's greatest screen couple. There's not an over abundance of heat between them and they seem to go from first meet, to old comfortable couple quite quickly, without much passion inbetween.

Lily Tomlin manages to steal a few scenes as Fey's ultra-feminist mother. The script should have pushed her character further. Their mother/daughter scenes are some of the best in the movie. Tomlin's scenes, as well as Michael Sheen's, are some of the film's silliest and funniest. Those moments work much better than the heartwarming ones.

There's nothing seriously wrong with Admission. There's just nothing particularly right about it either. It's a rather bland comedy that never rises above its sitcom premise. It feels very much like a waste of talent. 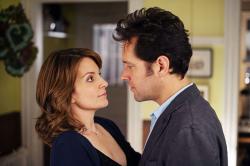 Admission is as bland a film as Scott wrote. I was never caught up in any emotional attachment to any character in any way. None of them are likable or, worse, entertaining. I am not sure if I should blame Jean Hanff Korelitz who wrote the novel or Karen Croner who wrote the screenplay but all three major characters are so annoying that I was left without anyone to root for. Since this script quotes Hilary Clinton, “It takes a village.” We understand the mindset of these writers.

Portia puts up with a boyfriend she should have dumped long before he dumps her. Her job is to judge other people but she is clearly unable to judge him. In one early scene we see her thought process of wanting to accept the hard working student and not the legacy. “(We)…endure the frustration of all the parents who just realized there isn't room for every organically-fed, well-tutored offspring.” The film never brings up all of the hypocrisy of athletes who bypass such scrutiny of their grades and character.

Sussanah is intended to be one of those independent feminists who think herself above everyone else. She can judge others failings but not her own. She slept with a man, had a child and never told the man that he had a child or the child who her father was. Susannah thinks all of that makes her a more empowered woman, while I think it just makes her a selfish bitch.

John is likewise flaky. He prides himself on being this wonderfully forward thinking person. At the school he works at, he teaches his students to build an irrigation system. That may be slightly helpful if they join the Peace Corp but will not help get them into a college. He moves around the globe working in third world nations, thinking of himself as a helpful person, yet he adopted a son whose interests and emotional wellbeing he is ignorant to.  His worst offense is bringing the news to Portia that Jeremiah is her son. That is by no means any of his fucking business.

Jeremiah is possibly a genius. We are told he tests extremely high and is an avid reader. The school he attends with John is probably the last school he should be in. He is already intelligent. This laid back school may work for the lazy and the pseudo-intellectual but Jeremiah has a brain that needs more cultivating in academia than communal awareness.

All of these characters are ready for a lesson and in minor ways they all receive one. However, the turning point in all of their lives is so poorly written that I never cared what happened to any of them. The best scene is when Susannah finally tells Portia about her encounter with her sperm donor and attempts a sincere apology. The ending of the film is otherwise completely unsatisfying.

If Portia had looked more within she would not have been so dumb struck by her boyfriend’s affair. If John had spent more time looking at his relationship with his son instead of trying to help a poorly equipped prodigy get into college, he would have seen earlier what his lifestyle was doing to him.

Admission tries to make a comment on how we judge others. I do not have a problem with that as judging each other is as natural as breathing.  The problem is not in the judging but in what we do with the judgment. We all judge each other, whether it is on an application or passing someone on the street but we should focus more on judging ourselves. As Carl Jong wrote, "Everything that irritates us about others can lead us to an understanding of ourselves."