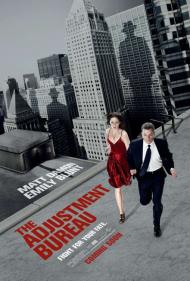 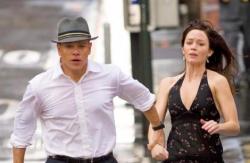 Damon and Blunt can't outrun this dog of a movie.

Like last year’s overrated Inception, The Adjustment Bureau is another convoluted movie fantasy. Matt Damon plays a New York politician running for the U.S. Senate. After a chance encounter with a woman he meets in the men’s room of the Waldorf while campaigning, his life will never be the same again. He falls in love at first sight but fails to get her number. Later when he chances upon her on a city bus David gets a glimpse behind the scenes at the powers that secretly control our lives.

You see we all have a plan chosen for us by the Chairman (God?). The Chairman has a bunch of guys in suits working for him to ensure his plan for each of us is on track. Sometimes the Chairman, for reasons known only to him, alters our paths. Apparently David and Elise were originally meant to be together but their paths were changed and they now must be kept apart at all costs.

This basic premise that David and Elise cannot be together is never satisfactorily explained. Plus the men in the Adjustment Bureau have all kinds of powers and yet they seem incredibly inept at their jobs. As the story goes along we learn several things about these mysterious men. They travel through doors that take them to different places in the city. To do this they must wear a hat. They can sense the presence of people but water restricts this ability.

The movie is full of arbitrary rules like this that make no sense and there are far too many plot holes. The Adjustment Bureau is a love story. David loves Elise so much that he risks going against fate for her. Emily Blunt is charming as Elise the aspiring dancer David can’t seem to live without. Damon’s David goes through the movie accepting all of these life altering revelations with a strange bemused calmness.

There are some attempts at humor but the overall tone of the movie is uneven. There is never any serious tension as the worst threat made to David is that they will RESET him if he doesn’t stop searching for Elise. The ending can be seen coming a mile away. The writers of this mess should have had their paths adjusted.

Emily Blunt in The Adjustment Bureau.

There's not much in common between this movie and Inception, but apart from that Patrick, I pretty much agree with you. The sad thing is, I really wanted to like this movie. I'm a fan of Damon and of Blunt and I'm always up for a good bit of Sci-Fi. The key to that phrase being "good" of course, which this movie never quite is. It's a premise that the filmmakers don't really seem to know what to do with.

The biggest problem with the script is that we never really learn what's going on and why things happen. It's clear that the "Chairman" is supposed to be some sort of god (unless it's Frank Sinatra they're referring to, which would certainly explain the hats (plus, who wouldn't want to live in a universe where Sinatra was god?)). Well if it's a god, then why does he bother with all the human trappings for his "angels"? Why does he have to send people down in suits with technology to change things? And why are there doors to begin with? Why can't god just send his people magically where ever he wants them to go? And what is this plan we keep hearing about anyway and why does a god need to do it by hand?

We are told some nonsensical rules, like the "angels" have powers, but they're weakened by water and they have to wear their hats to get through the doors. Sure, we're given some lame reasons for this, but not very satisfactory ones.

Damon comes across as easy going and charming, while Blunt looks good and is equally charming in a more quirky manner. Since the entire film hinges upon their relationship, you'd think it would be a good one, but apart from meeting in a cute way, we aren't given any real reason as to why these two are so much in love. In fact, we're told that their falling in love was destined and so are they even really in love or were they adjusted so that they would love each other? To be honest though, the fantasy angle is so weak that I would have almost rather have seen a straight love story drama about these two.

As Patrick mentioned, David accepts everything that happens to him far too easily. Basically he's just learned the very secret of the universe, but the next day he calmly goes back about his life as though nothing had changed. He now knows that there is a god and that there is a plan to the universe. You'd think that knowledge would either drive him to church, to the nut house, or to a bottle, but he simply gets on with his life as though the very nature of the universe hadn't suddenly changed right before his eyes.

The speed at which David accepts things is nothing next to Elise's acceptance though. David reveals all to her and she mumbles a few lines about, "Who?", "What?", and "How?" before accepting it all just as easily as David did.  Maybe it's their ability to accept the unacceptable that makes them such a perfect couple?

At the heart of this story there is an interesting premise. It's just a shame that no one involved seemed to know what to do with it.

David tries to explain the pointless rules to Elise.

I agree with Patrick on the comparison with Inception.   The Adjustment Bureau also established some rules and then broke them.  We are told that the adjusters, or angels, are supernatural beings that live a long time.  Thus they are not human.  Then one adjuster gets tired and falls asleep on the job.   A very human thing to do.

Like Scott I also thought of Frank Sinatra.  One of the first scenes is of four fedora wearing "angels" posing on a roof.  It looked like the rat pack, as each group only has one black member.

These "angels" manipulate and hurt people for the good of the....  Well it never really says.  Apparently mankind cannot take care of itself so they have to do it for them, but to what end?  What is the point of "God" creating a world if he has to control it.  What does he get out of that?  With free will, mankind chooses what his beliefs are and thus faith is the key.  In this world faith is meaningless, as adjusters will make you believe what they want you to.

The entire theology of this world is ridiculous.  If they can manipulate anyone to do as they wish, then no one is special.  It should not matter if David is president or someone else.  The adjusters can simply influence whoever is in charge to do what they want.  It does not matter who it is.  If they want the President of the United States to do something, all they have to do is control whoever is the President.  It does not have to be David.

All of this effort to get David to follow some particular path is completely moot.  Since anyone can be controlled, no one is unique and no one is more valuable than the next person.  One leader is as interchangeable as the next.  How can Elise be bad for David when all they have to do is control her to act as they want.  I liked the chemistry between David and Elise, but the entire premise is inexplicably flawed.   Once free will is removed, individual motive is meaningless.