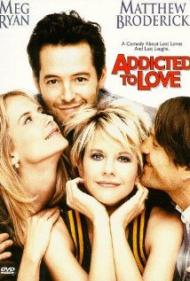 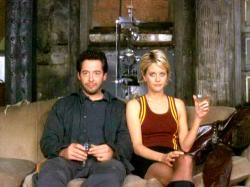 Matthew Broderick and Meg Ryan in Addicted to Love.

Meg Ryan was the romantic comedy queen of the 1990s. She made her fortune with her good girl next door persona in a series of hits. Attempts to breakaway from that persona didn't meet with a great deal of success. Addicted to Love, which featured a darker style of comedy than usual for Ryan, was one such attempt, but while it failed at the box office, is actually worth a second look. It doesn't feature the healthiest relationship of any Ryan love story, but it does contain some genuine laughs and real charm thanks to Ryan and her co-star Matthew Broderick.

Despite Ryan's top billing, it's Broderick who is the star. He was at the tail end of his movie career at this point and the double whammy flops of Godzilla and Inspector Gadget the following year would pretty much end his ability to headline a film. Here though, he's quite good. He plays Sam, a small town astronomer whose girlfriend, Linda (Kelly Preston), dumps him for a French chef during a visit she makes to New York City. Unwilling to accept her rejection, he travels to NYC and proceeds to stalk her, taking up residence in the condemned building across from her and her new boyfriend Anton's loft apartment where he begins to fanatically document their behavior hoping to find signs of weakness.

Ryan plays Maggie, Anton's ex-fiancee. She too is stalking her ex, but with plans for revenge rather than reconciliation. Soon she and Sam have teamed up and between them they set about dismantling Anton's life. They steal his credit card, release cockroaches in his restaurant, hide strawberries--which he's allergic to--in his pillow, and most importantly, begin framing him to make Linda think he's having an affair. Naturally, along the way Sam and Maggie begin to develop feelings for each other.

The humor is darker than in your typical Meg Ryan comedy and perhaps this explains why it wasn't one of her bigger hits. Maggie has a bit of an edge, including her wardrobe and desire for revenge. Her emotional and mental state isn't the healthiest, and yet her charm shines through anyway. Audiences might not have been able to accept this slightly different persona, but that doesn't mean she isn't excellent in the part. Broderick plays the hapless Sam and provides some laughs, but Ryan steals the movie as Maggie.

Ryan also gets one of the film's best dialogue moment when Maggie asks Sam to define love. After he waffles on until finally saying that it's something that can't be defined, she tells the following story. "When I was a kid, my father had this dog that started to get all weak and sickly. He takes it to the vet, he examines it and says a maggot must have laid eggs in the dog's butt. The baby maggots have crawled up, now they've started to grow, and eventually they're gonna eat the dog alive from the inside. He says it should be put to sleep, because it's an old dog anyway. But father won't do it. He takes the dog home, he puts it on the bed, he reaches up into the dog, picking out the maggots with his finger, one by one. It takes him all night, but he gets every last one. That dog outlived my father. That's love, Sam."

Tcheky Karyo plays Anton, the third character in this love triangle. There's supposed to be four characters in this dual couple situation, but Kelly Preston isn't required to do anything but look good. Anton starts as a stereotypical haughty, condescending Frenchman, but eventually he evolves into someone more three-dimensional that you can almost empathize with. This makes the pranks that Sam and Maggie pull on him, as well as the humor, even darker. It's easier to laugh at him when he's a caricature.

Audiences of the time might not have been ready to see a slightly edgier Meg Ryan, but enough time has passed since her heyday that it's worth looking at again. While perhaps not a true classic, there's enough laughs and charm to make it enjoyable. 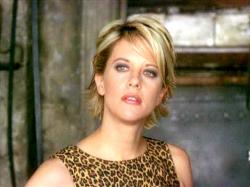 Meg Ryan in Addicted to Love

Matthew Broderick has the bigger part but Meg Ryan is all you will remember of Addicted to Love. She was all I recalled from watching it in theaters. As Scott wrote, this was an edgier role for her. She dresses a bit punk, rides a motorcycle and has such lines as, “When I'm done with him, he'll be just a twitching little stain on the floor.” She is still adorably cute but she lacks her When Harry Met Sally approachableness. Time has not dimmed this film but then it was never too bright to begin with.

Stalking must not have been such a common subject in 1997 as it has later become. Maggie and Sam break all kinds of laws spying on their former lovers. They steal Anton’s credit card to finance their stalking. They break and enter his apartment, not to mention taking up residence in an abandoned building.

Ryan’s and Broderick’s charm alone keep the film afloat. Neither is playing an entirely likable character but they make them so. At first we feel sorry for them as both have been jilted. Sam tries to explain to Maggie, “Say what you want, Linda and I are in love.” Maggie responds knowingly, “Yeah, except for her boning my boyfriend, you two are the perfect couple.”

However, Maggie’s pranks on Anton seem too destructive. She ruins his business, love life and damages his health. Anton starts as a stereotypical arrogant Frenchman, but as Scott noted, he becomes someone to empathize with. Maggie even sounds a bit deranged, “I'm not saying I want him dead. But, should that occur... people die every day, why should he be any different?

Addicted to Love seems, to me, like a foreign film. It does not have the usual flow of an American romantic comedy. The leads are wounded and act above the law. In traditional Hollywood films, a completely likable couple meets and falls in love by way of some humorous events. Here, Maggie, Anton and Sam are all very grey. Each is flawed, making them a bit more real but not so necessarily easy to embrace.

Scott seemed to enjoy this film more the second time around while I have pretty much the same opinion as I did in 1997. The only thing I take away is again, just how attractive Meg Ryan was. 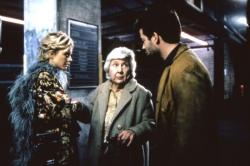 Sorry Scott, but not being a fan of either of the two stars I found very little to like here.This so-called comedy of errors is about as funny as nuclear war. The script is inane, when it's not otherwise occupied in seeming contrived, the dialogue's insipid. Meg Ryan and Matthew Broderick make fools of themselves playing these two desperately pathetic individuals.

I didn't buy this supposedly darker side to America's-onetime-Sweetheart. The second she removed that motorcycle helmet she was Meg Ryan. Try as she might she cannot stop radiating cutesy innocence. She has one decent scene. The one where she tells the story Scott quoted. The reason it's good is because she lets her guard down while telling it and actually sounds genuine. To me, except for that one scene, she's like a little girl playing dress-up with a classy-yet-hot biker chick's wardrobe.

Rarely have I encountered a character as pitiful as Sam. He's alternately reserved and nebbishy and then unexpectedly violent and vindictive. And the completely ludicrous plot goes on way past the point where it's obvious that not only do Linda and Anton (the couple being spied on) belong together but that Sam and Maggie are obviously perfect for each other as well. They are both equally screwed up, that's for sure. This wouldn't matter so much if the gags and jokes were actually funny.

There's no chemistry between Meg Ryan and Matthew Broderick. But then he has none with Kelly Preston either, so maybe it's him. The closest Addicted to Love comes to being funny, in my opinion, is in the scenes between Sam and Anton. They exhibit the brightest comic chemistry together at any rate. I did enjoy Maureen Stapleton as Maggie's Nana. Too bad her part is so small. I know I've been a bit hard on Meg Ryan and Matthew Broderick but to their credit I don't think that even Cary Grant and Carole Lombard could have made this script work.