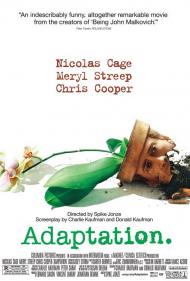 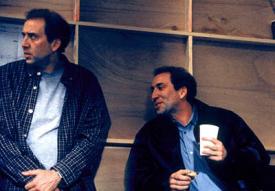 Adaptation is an interesting and quirky movie that is based on screenwriter Charlie Kaufman's struggle with writers block while adapting author Susan Orlean's nonfiction book The Orchid Thief into a screenplay. The lines between reality and movie fantasy are blurred beyond distinction. We see real-life movie stars like John Cusack, Catherine Keener and John Malkovich as themselves as a backdrop for real-life movie stars Meryl Streep, Nicolas Cage and Chris Cooper portraying the real-life characters of Susan Orlean, Charlie Kaufman and John Laroche. Are you with me so far?

Kaufman's problems get more complex when his twin brother Donald (Cage in a dual role) moves in with him and starts working on a screenplay of his own. Donald is as optimistic and gregarious as Charlie is morose and introverted. Cage does great work portraying these two very different identical twins. The movie jumps around between flash-backs showing Susan interviewing Laroche, and Kaufman struggling to adapt her book into a movie a few years later; all of this leading up to a showdown between the four main characters. In mood and style Adaptation is all over the place, sometimes trying to be a screwball comedy and only moments later a serious drama, culminating in an abrupt action/adventure thriller ending.

As bizarre as this sounds it works somehow, mostly due to the performances of the three leads. As I already mentioned Cage gives one of his best performances, he is funny, pathetic and intensely depressing. Streep plays against type to good effect. And although she doesn't have to stretch much or master any accents she effortlessly evokes her characters disintegration. Chris Cooper simply makes orchid thief John Laroche the realest character in the movie.

An original concept Adaptation suffers from spotty pacing during the first ¾'s of its run time and depending on your tastes the last thirty minutes will either make the movie or kill it. 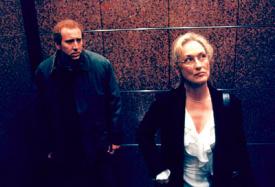 At the very beginning the screenwriter Kaufman is commissioned to write the movie we're watching.  He spells out exactly what he doesn't want his screenplay to turn into.  He doesn't want the movie to turn into a drug thriller with car chases, gun fights, and big life lessons learned by the characters.  Of course the movie ends with exactly all of those things happening, but there's a reason.

This movie tells the story of its own writing.  The first  ¾'s of the movie is written by Charlie Kaufman, both the actual screenwriter of the movie and a character in the movie who's trying to write the movie we're seeing.  The last quarter of the movie suddenly changes tone, becoming as Patrick says, an action/adventure thriller.  The reason for this is that at this point in the movie Charlie Kaufman is suffering from writer's block so he asks his brother Donald to help him write the screenplay.  Donald writes cheap action flicks with gimmicks and overused situations.  And therefore, the last 30 minutes are exactly that, but it's a joke within a joke.  We're seeing the movie change tone because in the movie the screenwriter has changed.

It's a brilliant concept.

I think Patrick took this movie too seriously.  He claims that this movie is all over the place, but I don't think it ever strays too far from comedy.  It's just a very, very clever one. 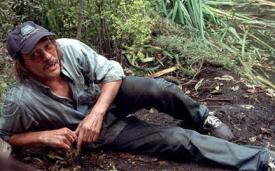 Adaptation is the most self-indulgent piece of arrogant crap I have ever seen. Not since Mr. Gillis stumbled into Norma's life have I seen such a whiny, self-important screenwriter. Charlie Kaufman is of course flawed, but he also puts himself above everything. He is the artist lost in a world of superficiality.

The plot is original in flow and style. Action comes out of nowhere. The surprise car crash gets used more than once. There is an unexpected gunfight in a swamp. The dialogue is sometimes surprising. "I fucked her up the ass." Charlie's agent announces, as he points to girl walking by.

No one in the movie is likable. I did not care about how the movie would end. That in it self is the worst crime a story can commit. Of course the arrogant Charlie would disagree as he is so vastly a creative writer. blah blah blah. If a movie does not entertain it is not worth watching. If the audience does not like the characters, there is no emotional attachment to the story. Wasn't Charlie paying attention at that screen-writing seminar?

This is one of those movies where many critics fawned over it, but audiences were left in the cold. Who do these kind of movies get made for? Sure there is some originality and creativity going on, but so what? I pay for a movie to be entertained, not to be impressed by how imaginative a writer is. Scott wrote that this movie is "clever." Yes, it is clever, but its entertainment quota does not go beyond the uniquely written plot.

One stand out aspect in this movie is Chris Cooper. Man, can this guy act! He played the repressed homosexual in American Beauty. In Adaptation he plays the interesting toothless Orchid Thief character, whose hobbies include stealing flowers and pornography.

I can just imagine the writer of this movie disregarding my review with an arrogant wave of dismissal. The box office receipts however, show that originality is not the only secret to a successful film. Don't give me the line about movies as art either. Hollywood is first and foremost a business. Anyone who thinks otherwise is only fooling themselves.