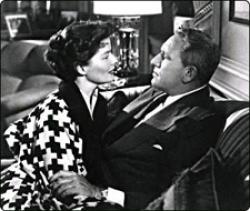 No two actors have better represented their gender in the battle of the sexes as Spencer Tracy and Katharine Hepburn in Adam's Rib. Although it seems a bit dated, the fun and the arguments these two pros engage in are still very much relevant today.

Married lawyers Adam and Amanda find themselves as opposing counsel in an attempted murder trial. A woman shot her husband when she caught him in the arms of another woman. Adam is prosecuting as a DA, while Amanda is defending the wife. Amanda takes the case not to defend the jilted wife so much as to make a statement for feminism. This leads to many arguments between Adam and Amanda, in the court room as well as in their bedroom. Conservative Adam follows the letter of the law, while liberal Amanda wants to interpret it.

Hepburn and Tracy verbally sparring is classic film history. They each win and lose arguments. After giving each other slaps on the butt, they have an argument where Hepburn says, "I'm not so sure I care to expose myself to typical instinctive masculine brutality." Tracy referring to Hepburn's tush later says, "What've you got back there? Radar equipment?"

Hepburn is on her soap box in this movie trying to desperately make a statement about female equality. Although the movie often leans in her favor, Tracy makes several great points. He reverses roles on Hepburn near the end, and has this great line, "No matter what you think you think, you think the same as I think." In another great scene he gets Hepburn to admit that there is some difference between the sexes, "...but it's a little difference." she says, to which Tracy responds, "...hurrah for that little difference." As he closes the bed curtains around them.

Although Tracy and Hepburn are the two mega stars of this movie, they are supported by some great fellow thespians. Holiday was a couple of years away from the success of Born Yesterday. Hagen would go on to steal every scene she appears in Singing in the Rain. Ewell would not fair as well with his future co-star, but he will always be remembered as the man staring at Marilyn Monroe as her skirt was blowing in The Seven Year Itch.

Adam's Rib is what great classic romantic comedies are all about! 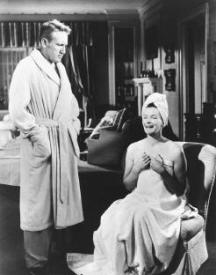 Tracy and Hepburn as pals, oops I mean husband and wife in Adam's Rib.

Frankly I think Spencer Tracy and Katharine Hepburn are overrated as a romantic comedy team. Of their movies together Guess Who’s Coming to Dinner is the only one where they seem like a true married couple. In all their other films together, that I have thus far seen, I see two talented actors playing very compatible friends, but no sexual tension to speak of. I prefer them both in dramatic roles anyway. And though many movie fans will likely disagree with this statement, I think Hepburn had better chemistry with other leading men, including Cary Grant, Humphrey Bogart, Henry Fonda and John Wayne.

My brothers have often accused me of not thinking for myself and of giving rave reviews to movies based solely on their reputations as classics. Well critics certainly revere Tracy and Hepburn as a team and this movie in particular. TCM gives Adam’s Rib 4 stars and the AFI placed it at number 7 on its 2008 list of the greatest romantic comedies. I beg to differ.

As Eric briefly mentioned, the script hasn’t aged well. The very idea that a lawyer would need to bring expert witnesses to the stand during a trial to prove the equality of women is laughably outdated. One of the possible jurists flatly tells Hepburn he is not for equality of the sexes. It is also casually mentioned, and accepted by all, that Tom Ewell’s character sometimes beats his wife, played by Judy Holliday.

Another sin this movie makes is in its wasting of two of the greatest comediennes in movie history. Judy Holliday and Jean Hagen were both comic geniuses. Yet both are terribly underused. They each get but a few brief shining moments. Given their naturally funny line deliveries nearly everything they say is funny. It’s just too bad that Tracy and Hepburn completely dominate the movie.

Why, in these movies, was there always an inappropriately younger man around lusting after Hepburn? In Desk Set it was Gig Young and in Adam’s Rib, David Wayne has the thankless role. In both cases there is absolutely zero chemistry between them and Miss Hepburn. In fact Hepburn looks at them with as much interest as if they were bugs squished on her windshield.

To be fair, the script, by real life husband and wife team Garson Kanin and Ruth Gordon, does contain some laughs. During his closing statement, Tracy pithily says, “First of all, I should like to say that I think the arguments advanced by the counsel for the defense were sound... MERE sound!” Judy Holliday steals her scenes on the witness stand. When asked how she felt after shooting her husband she replies, “Hungry.” And Jean Hagen provides a few laughs as well. Check out this exchange between her and Tracy.  Hagen: “And then I heard a noise.” Tracy: “What kind of noise?” Hagen: “Like a sound.” Coming from Jean Hagen this is much funnier than it reads.

My brothers will most likely say this doesn’t sound like a 3 star review. I agree that it doesn’t. However, I honestly think Adam’s Rib deserves 3 stars. My purpose in focusing on its negative attributes was to knock this sacred cow down a peg or two, since I don’t think it deserving of all the accolades thrown its way as one of the greatest of all romantic comedies. But hey, don’t take my word for it. Watch it and decide for yourself. 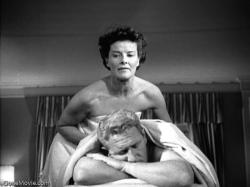 I agree with you Patrick that this movie is overrated, but for slightly different reasons. I think that Tracy and Hepburn have a great chemistry with each other in this movie and make a very believable couple together. Sure, they're not young and in the first bloom of sexual lust, but at the same time I wouldn't say they are completely devoid of sexual chemistry and I definitely saw them as a couple and not just friends.

The courtroom scenes are just silly. Not only is it laughable they would need expert witnesses to testify about female equality, it also has no bearing on the case. The woman who comes in and testifies that she has numerous degrees and the physically strong acrobat who embarrasses Tracy by picking him up, have absolutely no bearing on whether or not Doris shot her husband. What judge would even allow them? Hepburn's Amanda pays more attention to these witnesses than she does using the physical abuse as an excuse for the shooting, which would have made a lot more sense.

Hagen is hilarious and criminally underused. She only has a few scenes, but she makes the most of them. Likewise, agree that Judy Holliday does a good job as the wife. I love how in the opening scenes she's reading the gun manual just prior to bursting in on her husband and his lover.

I also agree with you Patrick that David Wayne's part is as thankless as it is unneeded. Its only purpose is to provide Tracy's character with an excuse to use the licorice gun. He adds little to the story beyond that.

The battle of the sexes has been done countless times in movies and on television. This one has its moments and the cast certainly gives it their all, but I would never put this among the top 10 greatest romantic comedies of all time. It's amusing enough, but very, very dated. Both Hepburn and Tracy made better.