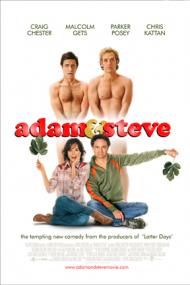 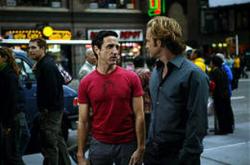 Craig Chester and Malcom Gets are Adam & Steve.

Adam & Steve is a scream. Written, directed and starring the talented Craig Chester. As the title suggests it's about a gay love story. Adam is a Long Island Jew and Steve a Texan Christian. They shared a disastrous one night stand in 1987 but don't recognize each other upon meeting again 17 years later. They begin a relationship that quickly turns serious. The turning point occurs when they finally remember each other, on the Brooklyn Bridge. Like Woody Allen, Chester combines outrageous humor with somehow believable characters. Also like Allen he makes cinematic love to the city of New York.

The opening sequence is hilarious and will resonate with anyone who went clubbing in the 80's. Adam is "Goth" and has long black hair and wears white face paint. Steve dresses like a cheesy MTV video dancer with long blond tresses and a tight, strategically-ripped spandex outfit.

Adam and Steve meet each other's parents. As expected Steve's are conservative and culture-shocked but they do accept their son. They are stereotypes but humanized ones. Adam's parents are just as clichéd. They suffer from the "Bernstein Curse". Their bad luck is hilariously exaggerated in one of the funniest scenes, proving that slapstick is still alive.

The humor is fast-paced and most of the jokes work. Only a few are allowed to get overdone (the gay heckler bit goes on too long) but for the most part this movie keeps you laughing.

Although this is absolutely a comedy it does have some emotional depth as well. It is about second chances and facing middle-age. It also has a happy ending and one of the best dance numbers I've seen in years. 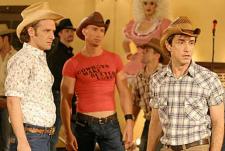 Broke Back Mountain; The Musical.

Are you kidding Patrick? The heckler was my favorite part. Every time the homophobe yelled something at them, I laughed my ass off. What he yelled was not actually funny, but when he yelled, and how they reacted, made it hilarious. Ironically, he ends up helping them get back together.

I thought the dance scene was pointless. It should have ended up on the cutting room floor, or perhaps shown over the end credits. A major theme of the film is that Adam and Steve are different. Having Adam suddenly become an accomplished country dancer, like Adam, contradicts the theme. It seems more like a dream sequence than an actual part of the story.

Adam and Steve is a riot from start to finish. Although the start is as gross as it is funny. Rhonda gets many great lines. At one point she tells Adam that she has to go to the bathroom because she is feeling creative. My favorite line is when Adam says to her about Steve, “You know for a shrink, he's really unaware.” and Rhonda adds, “I'm tellin' you, they're like preacher's kids!”

I must be getting less bothered by things, as I grow older. At one time I would have been uncomfortable watching a love story between two men. Perhaps it was just too funny of a movie for me to care about such things.

I want to extend a compliment to Craig Chester. Even though it is the milestone of a generation, movies rarely make reference to the 9/11 attacks. It is the topic of several conversations here. Chester even points out, with the memorial plate, how some people have even profited from it.

Adam and Steve it is a great romantic comedy. I laughed harder here, than I have during many straight romantic comedies. It does however, fall into the traditional romantic comedy trap. It never says why the two leads fall in love. They just do, and if you can get past that, you are in for a good time. 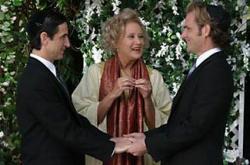 Craig Chester, Sally Kirkland and Malcom Gets in Adam & Steve.

The real test of a romantic comedy is whether or not you care that the two leads end up together by the time the credits roll.   By that criteria, Adam & Steve is grand success.  Sure, there are some bumps along the way in this imperfect film, but you still want to see these two and their relationship succeed.

I agree with Patrick that the dance number is well done, but I also agree with Eric that it's out of place in the movie, and it's not the only such scene.  Some of the scenes are a bit surreal, and while funny, don't fit in the heartwarming romantic comedy world of the story.  Adam and Rhonda sit on a park bench and end up in a pose that mimics the statue next to them.  A mental patients rolls around and makes faces in the background.  And even Steve breaking into song in one of the final scenes.  Moments like those are funny, but they belong more in a spoof than in a romantic comedy.

Posey and Kattan are both scene stealers in the traditional best friend roles.  I didn't even recognize Posey in the first scene when she is in the fat suit and I had to double-check it wasn't another actress.  Her sarcastic, ex-fat girl persona is the perfect match for Kattan's mini horn dog.

Part of the reason I felt that the two leads fell in love, apart from the physical attraction, is that they both felt as though they'd met before, which of course they had.  Since they didn't remember meeting, the feeling gave added weight to their relationship and by the time they'd figured it out, they'd gotten to know each other enough that their love was real.

Adam & Steve  is a very funny romantic comedy that shows no matter what your sexual orientation, sometimes shit happens.