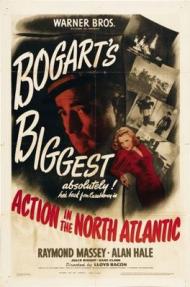 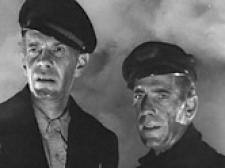 Raymond Massey and Humphrey Bogart in Action in the North Atlantic.

During World War II, Hollywood movies worked overtime consoling our nation and trying to inspire its citizens to service. Every branch of the armed forces, and every sub-branch was given its due. Action in the North Atlantic pays homage to the merchant marines.

The movie opens with a group of civilian sailors talking below decks while their ship is at sea. Their conversation foreshadows an attack,“If a torpedo ever connected with this ship, we'd go up like a match connected to cellophane.” Before you know it they are abandoning their ship as it gets torpedoed by a Nazi submarine. The scene is tense and exciting as a couple of men have to dive into the ocean covered with burning oil. Once they all get onto a life boat, the German submarine surfaces and runs it over. It is a great beginning to a war movie.

Action in the North Atlantic runs over two hours long, and the opening action sequence is over before the first half hour mark. It then follows the survivors home. The captain goes back to his wife, "For a sailor's wife, war is just another storm." Meanwhile, Bogie meets a woman in a bar singing Night and Day. The crew have too much screen time as it wants to show different personalities. It should have stuck with Bogie alone.

Eventually the crew all find themselves back on a new ship. The movie ends with a slightly longer action sequence involving a Nazi bomber and the same Nazi submarine. Again, the action parts are tense and thrilling. Not everyone lives.

Like most of the war movies made during this time, belief in God and patriotism are spoken loud and proud. “I got faith in God, President Roosevelt, and the Brooklyn Dodgers in the order of their importance.” and “That isn't a miracle; it's American seamanship.” Are two such lines that stand out.