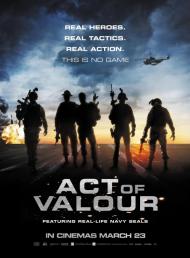 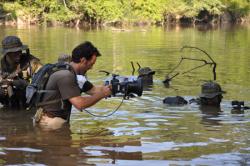 Filming a scene for Act of Valor

The big selling point of Act of Valor is that it stars actual, active-duty US Navy SEALs.  The lack of acting ability demonstrated here will convince you it is true.  However, most of the SEALs shown look as if they are on the far side of their thirties.  They may be active duty military, but my guess is that they now fill more leadership and training roles than actual work down range.  I am by no means trying to take anything away from these guys, I am just pointing out that they are all suspiciously middle aged.  None are given screen credit by name.

Written by Kurt Johnstad, whose previous writing credit is one of three screenplay writers for 300 (2006).  Like that film, Act of Valor works well when people are fighting.  As long as guns are blazing, people are running and bombs are exploding, you have a 4 star war movie.  Whenever the action stops to let one of the inexperienced cast members speak, we are reminded of just how authentic this film is.

We are introduced to a group of SEALs as they spend time with their families and each other.  One in particular has a wife who is expecting, while another, his best friend, is married with five children.  After a CIA agent is abducted, the SEAL group is sent to South America to rescue her.  This leads to a larger plot that involves a Muslim terrorist attempting to send suicide bombers into the United States.

The rescue in South America is the best part of the entire film.  It is hands down the best modern military action sequence I have ever seen.   I was completely caught up in the action and suspense as they drop from the sky, sneak through the jungle, start picking off the enemy and then carry away their wounded as they attempt to get the hell out of there.  The moment the truck hits the water and the armored boats show up and return fire, I was cheering like I was there with them.  The problem is that was not even half way through the movie.  There is lots more action to come, but the SEAL team splits up after that and the plot moves in several dubious directions.

Act of Valor is the kind of pro U.S. military film not seen since the days of John Wayne.   Everything is painted completely black and white.  The bad guys slaughter a group of innocent children, beat the crap out of and torture a female CIA agent.  The good guys are shown spending quality time with their families and bonding with each other.  None are shown having any hidden agenda, hint of betrayal or weakness of any kind, except for perhaps the fact that they all want to come home to their families.   I found it to be very refreshingly old fashioned.

The SEALs seemed like superheroes. In one scene they are on a beach as civilians and then the next they are in uniform jumping out of the back of a plane prepared to kick ass and save the damsel in distress.  A cynic could write that Act of Valor is just a long military recruitment film.  My teenage son pointed out how the first person shots reminded him of playing "Call of Duty".  The movie fan in me though, does not care if it inspires anyone to join the service or not.  I was too busy being entertained, something so many Oscar nominated pictures fail to do.