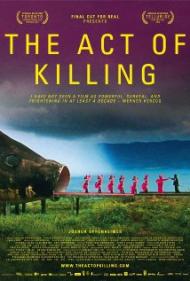 Directed by: Joshua Oppenheimer and Anonymous

Anwar Congo and two of his grandsons in The Act of Killing.

The Act of Killing is a very uncomfortable documentary to watch. It tells the story of how director Joshua Oppenheimer and an anonymous Indonesian gave several former death squad killers the opportunity to make a movie about the Indonesian killings of 1965 when more than 500,000 people were killed. Oppenheimer then followed these men and filmed them making their own film. Following a screening of this film in Berlin an audience member compared it to showing Nazi guards discussing how they killed Jews in the concentration camps during World War II. The difference, Oppenheimer pointed out, is that the Nazis are no longer in power, while the same government in Indonesia is still there and these killers are revered.

The primary focus of the film is on Anwar Congo who personally killed around 1,000 people, most often by strangulation. He speaks directly to the camera, happily describing these murders and recreating them several times over the course of the film. At one point, he and several of his cronies go on a morning television show where his deeds as executioner are bragged about to an enthusiastic television presenter. While other members of the death squads sometimes seem hesitant to discuss their past lest their reputations become tarnished, Anwar is an open book.

One of the results of the death squads was the growth of the paramilitary group Pemuda Pancasila. This group, whose leader is chummy with seemingly every politician in the country, appears to be in reality just a mob of gangsters dressed up in military uniform. They extort money and do enough illegal deals to impress even Tony Soprano. Again, far from being ashamed of these acts, they happily brag about them into the camera.

The word gangster is thrown around several times in the film. Always, whoever says it, points out that the meaning of the word comes from the term, "free man" and they point out how the country needs free men.

In the beginning, the film Anwar and his friends start to make focuses mainly on the killings, but as Anwar confesses to being plagued by nightmares, the film becomes more surreal. When Anwar acts out a scene as one of the victims with a wire around his own neck, for the first time he seems genuinely affected and is no longer able to continue acting in the scene.

For the length of the movie almost everyone in it seems oblivious to the fact that this documentary isn't a celebration of them, but is instead a condemnation of their actions. The propaganda in their own country is so strong against the communists that their past actions are seen as heroic. To anyone outside this demonstrably corrupt society their guilt is obvious, but to them their actions were cause for celebration.

In the end, it is the humanity of the killers that is the most disturbing aspect of the film. If Anwar was simply a psychotic serial killer this movie would be easier to watch. He isn't a demon, but an ordinary human being who committed the most extreme atrocious acts. It also shows the power of society where, because his actions were condoned at the time and spoken of with praise ever since, he actually questions whether what he did was wrong, when anyone watching this film from outside Indonesia will have no trouble answering that question for him.

This isn't an easy or enjoyable film to watch, but you have to admit it has power. The death squads in Indonesia also still have power. Most of the crew on this film refused screen credit and are listed as anonymous. Anwar has said in interviews since the film's release that he too has experienced trouble and that his reputation has been tarnished by the negative reaction to the film in Indonesia.