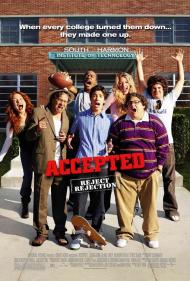 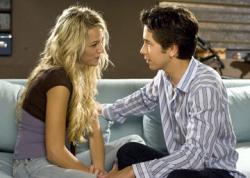 I'm obviously too old to really appreciate Accepted. The only people who could really appreciate this movie are college students who haven't had to get a real job and start paying for things on their own. Its message of do what you want, not what the world wants you to do, falls apart when you stop to think that the only reason any of these people are able to do what they want is because someone else is paying to allow them to do that. Wow, I've certainly grown conservative in my old age, haven't I?

Justin Long, the junior member of the Vince Vaughn/Will Ferrell led Frat Pack, stars as Bartleby Gaines, a high-school senior who's slacked his way through life so far and is subsequently rejected from every college to which he applies. Since his parents are so gung-ho for him to go to college, he goes ahead and invents the South Harmon Institute of Technology (S.H.I.T.). At first it's just an acceptance letter and a website, but when his parents want to drop him off on his first day, he's forced, with the help of his friends, to use the $10,000 that his parents have given him for tuition, to lease an old building, clean it up, make it look like a college, and hire a Dean (Lewis Black). Of course, if he'd put even a quarter of that effort into getting into college, he probably could have been accepted into Harvard.

At first all seems good, he and his friends laze around the empty "college" building, but their peace is disrupted when hundreds of students show up claiming to have been accepted into the school. It seems that Bartleby's friend, who designed the site, actually made it functional. Rather than turning the new students away, Bartleby accepts their checks and decides to run the school. He builds the curriculum around whatever the students want to learn, which ends up being Slacking, Skateboarding and Bikini Watching. It's like a 21st Century version of the Freedom School from the movie Billy Jack.

The bad guys in the movie are, of course, the Frat Boys at the real college next door. You know, the idiots who will eventually go on to do something with their lives. Naturally, they're portrayed as arrogant assholes, because, if you believe Hollywood, every Frat Boy is an ass and every Sorority Girl is a slut.

I can you hear you saying, dude, it's only a movie! Why worry about the philosophy behind it? Normally I wouldn't. I'd leave that for my brother Eric and his paranoid conspiracy theories. But the truth is, the movie isn't funny enough for me to ignore the message behind it. Granted, there are a few funny bits tucked in here and there, but never really more than a chuckle.

The cast is okay. Long, in his first starring role, is likable and talented, but he needs to pick better material.

Anyone still laboring under the misapprehension that the world owes them something, will probably enjoy this movie. Anyone living in the real world, probably will not. 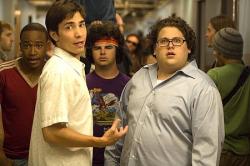 Here is a conspiracy theory for you. I believe many screen writers are drug using, morally lacking liberals. Who else could come up with this hippy shit plot? The story was written by Mark Perez, who wrote Herbie Fully Loaded and The Country Bears. You just know this guy is on drugs.

Scott comparing this movie to the Freedom school in Billy Jack is spot on. In both films young people believe that if they are just left alone to be themselves, without any direction from adults, they can nurture their own creativity and that they will all grow up to be wonderful, intelligent human beings. What 12 year old came up with that?

I was reminded of an old story that goes something like this. Two mothers are talking on a sidewalk in front of one of their homes. One mother’s children are running around the street, jumping in front of cars and swearing at the top of their lungs. The mother, whose house they are standing in front of, asks the unruly children's mother why she does not say anything to her delinquent children. “I want them to feel free to grow on their own without being impeded by structure.” She then looks at the other mothers unkept yard and says. “At least my yard is not such an eye sore full of tall weeds.” The home owning mother responds, “I want my yard to feel free to grow on its own without being impeded by structure.” Young people's brains are like gardens. If you don't cultivate them, they go to weed, or they end up smoking lots of it.

The speech Justin Long gives at the end of the movie is completely full of shit. He yells at the Dean of another University such lines as, “You're a criminal. 'Cause you rob these kids of their creativity and their passion… 'Cause you (we) don't need teachers or classrooms or - or fancy highbrow traditions or money to really learn… we'll never stop learning, and we'll never stop growing, and we'll never forget the ideals that were instilled in us at our place…” He is against education traditions that have been working for thousands of years. He claims they will never stop learning when they have yet to even start. What ideals is he even talking about? Although I do think that many colleges and University are as interested in money as educating its student body, students do need instructors and a structured curriculum to actually learn something.

Only some pot smoking hippy could actually believe that doing nothing can be educational. You certainly can learn without being in a classroom or lecture hall but you must have experiences and someone there to answer your questions and challenge you with theirs. Just sitting by a pool or playing video games all day will teach you nothing that a thirteen year old does not already know. If having the intellect of a teenager is your goal, then have at it, but if you want to be at all successful in life, it is best that you actually try to learn something.

Accepted is intended to be a comedy, but it acts as if the lack of structured education is a worthwhile idea. If the main theme of this film and the characters make little, or no, sense. Who or what the hell am I rooting for? I found very little here to enjoy but I will admit to laughing at the very last line in the movie.