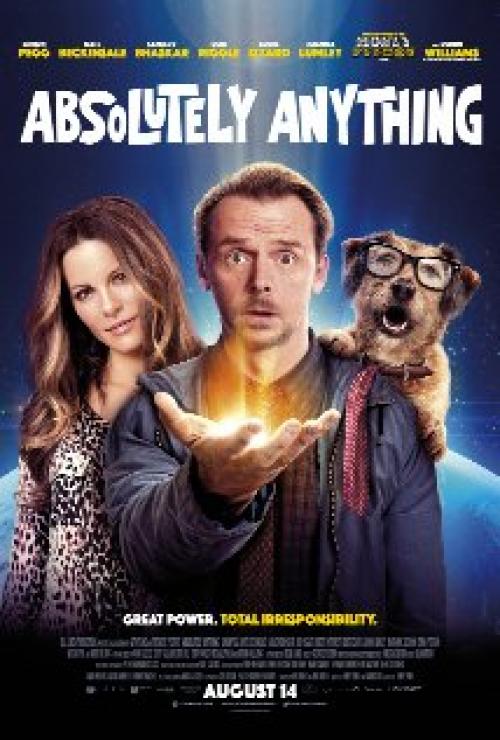 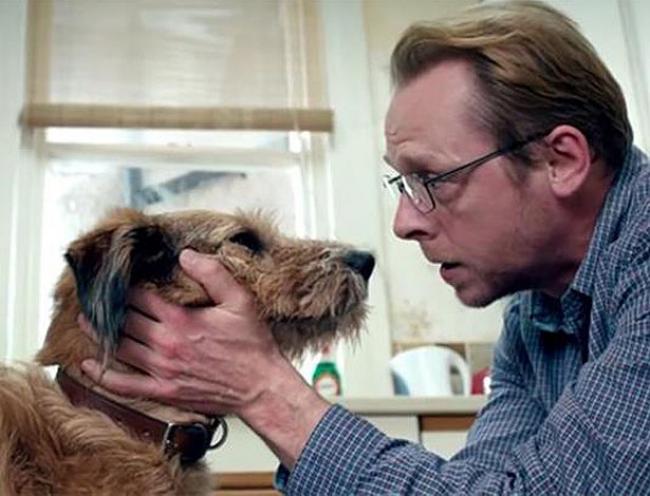 Dennis the Dog and Simon Pegg in Absolutely Anything.

How on Earth do you make a movie featuring Simon Pegg, Eddie Izzard, Joanna Lumley, Sanjeev Bhaskar, the voice of Robin Williams in his final role, and the voices of all five surviving Monty Python members (together on the big screen for the first time since 1983) this mediocre? Directed by Python member Terry Jones, his first film as director in 20 years, from a script that he baffling claims to have been been working on for nearly that long, is mildly amusing in places, but fails to capitalize on either its central premise or its stellar cast.

Although Jones has said he loosely based the story around H.G. Wells' short story, The Man Who Could Work Miracles, modern audiences are more likely to compare it to 2003's Bruce Almighty, starring Jim Carrey. As with that earlier film, an ordinary man is given godlike powers. In this case, it's Simon Pegg as Neil, a teacher/wannabe writer, but instead of god, it's a group of aliens, voiced by the Monty Python members, who grant him the ability to do anything he wants. It's their form of test when encountering a new species. They temporarily grant a random member of that species with the powers of a god to see how they behave. If the use of that power meets with the alien's approval, the species survives. If not, the aliens will destroy the new species by blowing up their planet.

Neil's power means the story can go literally anywhere, but it remains restrained. Instead of altering his life, Neil goes about his day-to-day activities, making minor changes. He continues his job as a teacher, despite hating it, his students, and his boss. Instead, he makes his students polite and his boss (Eddie Izzard, wasted in an unfunny cameo) like him. A couple of subplots have potential, such as when Neil makes the object of a friend's crush worship his friend and instead of a love affair, she forms a new religion around him, and when Neil grants his dog Dennis the ability to speak. Dennis is voiced by Robin Williams, in his final ever movie, and I'd love to say he's wonderful in the part, but even he feels like he's holding back, especially for a Robin Williams' performance.

Kate Beckinsale co-stars as Catherine, Neil's downstairs neighbor who he has a crush on. He uses his power to make her fall in love with him, although it turns out he didn't actually, because the aliens' power is momentarily on the fritz when he makes that particular wish. Instead, she comes up to his apartment on a drunken dare and ends up sleeping with him. I suppose this technically makes this a romantic comedy, but the romance is tepid at best and Beckinsale and Pegg share zero chemistry. American comic Rob Riggle appears as a fellow love interest for Catherine. In attitude he seems to be channeling Kevin Kline's Otto from A Fish Called Wanda, only without being funny.

The most enjoyable scenes in the film are the brief moments aboard the alien spaceship with the voices of the Pythons. Their bickering and interaction provide a few mild laughs, demonstrating their lasting ability to play comically off of each other. Sadly however, these moments are all too brief.

Although granting someone the ability to perform miracles sounds like it could be rife with possibilities, it actually presents story problems. Namely, when anything is possible, how do you create any kind of suspense? Every problem Neil encounters can be solved with the wave of a hand. To get around this the script often ignores his powers. When Catherine runs off angrily, Neil physically chases after her when he could of course teleport himself or her anywhere he wanted. When Riggle's character forces Neil to obey him by threatening to shoot Dennis, Neil goes along, when in reality he could, if worst came to worst, resurrect Dennis. And of course, if the aliens can grant godlike powers, then surely they have godlike powers themselves, in which case, why do they bother with this test? If the comedy were surreal or funny enough, these questions would be easier to ignore, but as it is the film is often frustratingly bad at following its own rules.

The movie isn't completely devoid of humor. It's just more likely to be enjoyed by small children than fans of classic comedy. Certainly, with this much comic potential in front of the camera, it should have been funnier than this. 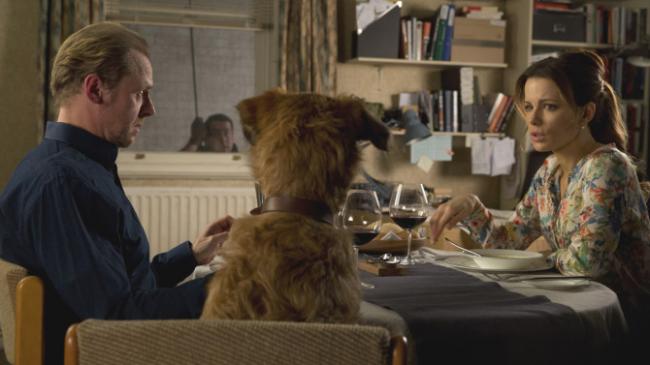 Simon Pegg, Dennis the Dog, and Kate Beckinsale in Absolutely Anything.

Scott, the answer to your opening query is apparently easily. I agree that Absolutely Anything isn't a complete waste of all the comic talent involved but it barely scratches the surface of the hilarious possibilities such a cast represents. As Scott wrote, the Python members are given very little screen time. They do provide some laughs but aren't given enough scenes to make any real impact. And to be honest their characters are a bit poorly written. With such a ridiculous plot you would expect a slightly sillier movie. But, again agreeing with my brother, it all feels a bit restrained.

I have to say that while watching the movie I didn't even realize Robin Williams was doing the voice of Dennis the Dog. In retrospect he has his moments but there is never that instant when you think, oh that has to be Robin Williams. If you know what I mean. If Terry Jones directed him to bury himself in the role, then he succeeded.

I did laugh out loud once. It was when Neil requests a penis that women will find exciting. He then looks down at himself and says, "Yeah, it's good, yeah. Could I have it white?"

As the movie goes along you can't help but think how dumb this guy is. He uses his powers in stupid, mostly unfunny, ways. And fails to use them at the most obvious of times. Scott mentioned how wasted Eddie Izzard is, well ditto Joanna Lumley (although she looks great). Another problem is the complete lack of chemistry between Pegg and Beckinsale. Not that Simon Pegg would likely have great romantic chemistry with anyone. Some people just aren't meant to be leading men.

I didn't totally hate this movie but I do recommend seeing almost absolutely anything else.

Simon Pegg wishing this was his real body in Absolutely Anything

I am pretty much in agreement with my brothers on Absolutely Anything. I like that it whizzes by as its running time is less than 90 minutes. However, I would not have minded a few more scenes. Both of my brothers mentioned certain stars not getting enough screen time and I agree. Joanna Lumley plays a snarky television talk show hostess who interviews authors about their books and personal life. She could have used another scene where she pokes fun at famous authors like Stephen King or J. K. Rollins. I did not even recognize Eddie Izzard. He should have played the part in drag.

Most of the humor derives from Neil not being specific about his wishes. Most result in him appearing in the wrong place or creating a greater problem than he intended to solve. Scott mentioned the girl Neil makes worship his friend like a God, when all he intended was for her to fall in love with him. My favorite such scene is when he tries to prove his powers to his friend by telling a skeleton in a classroom to tell them who he was when he was alive. It begins to walk around and talk about when he was alive, revealing that he was a bigot.

Scott mentioned that Terry Jones had been working on this script for many years and it shows as some of the jokes are hopelessly outdated. Early on we see the aliens randomly deciding which earthling to make omnipotent. Just before Simon Pegg's face appears we see Sarah Palin's. Really? She ran as John McCain's vice President in the 2008 elections. Don't you think a more recently relevant polarizing politician like Hillary Clinton would have created a bigger audience reaction? When facing the Headmaster, Pegg squirms as he is reminded of all the excuses he has recently used to not come to work. One was that he had a meeting with the Dali Lama. Pegg even produced a photo to prove it. The Headmaster then tells him it was obviously a fake as Michael Jackson was in it. Jackson died in 2009. Plenty of famous people have died recently that would have provided a bigger or better punch line.

Using Sarah Palin and Michael Jackson as punch lines is lazy writing but the real problem was the character of Neil. Simon Pegg plays him like every other character he has ever played, that of the dull, unhappy British slacker. Neil should have been picked by the aliens because he is old school proper, with classic quality British manners. It would have provided him with an inner moral guidance but also plenty of personal conflict as his personal code would be challenged by the ability to grant his every desire. The possibilities would have been far more entertaining that what we are given here by this ordinary and frankly boring school teacher.

I put down Absolutely Anything as a missed opportunity.