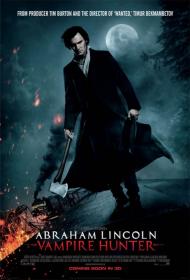 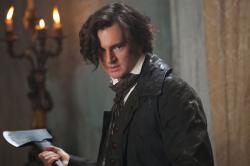 I remember when I first saw the trailer for this movie a few months ago. The entire audience burst out laughing when the title came up on the screen. It was the spontaneous laugh of a group of people who couldn't believe the audacity of what they were seeing. The mashup of one of our most revered presidents with blood sucking vampires just seemed so over-the-top that everyone couldn't help but laugh. Time and time again in the intervening months, I experienced the same reaction from every audience I saw the trailer with. Surely, this was going to be a fun movie. How could it not be with an ax wielding, kung fu Abe Lincoln chopping up creatures of the night?

Somehow though, the makers of this movie managed to suck all the fun out of it by playing it all deadly serious and decidedly dull. Did they not understand just how silly the concept behind this movie is? I mean, you've got fucking Abraham Lincoln killing vampires! That's not a plot that should ever be taken so seriously.

The plot sketches a very brief outline of Lincoln's life, grafting vampires onto the important events. His mother, instead of dying of milk disease as in real life, is instead killed by a vampire. This sets Lincoln on a path of revenge. He's trained by a "good" vampire, named Henry, to become a vampire hunter. Henry is also seeking vengeance since he was made a vampire against his will, but is unable to hunt vampires on his own because in this alternate universe no two vampires can kill each other for some odd, never explained reason.  So you have Lincoln studying to be a lawyer by day while killing vampires at night, which again, isn't as much fun as it sounds.

It turns out that the southern states are really being run by vampires. They are using the slaves in those states as a food supply. The Civil War in this universe isn't about state's rights or the ability of one person to own another, but is secretly about humans versus vampires. Lincoln becomes President because he sees that he can do more damage to the vampire cause as a politician than he can as a one man ax wielding killing machine.

Like so many of the other vampire movies and TV shows that are popular at the moment, this one plays fast and loose with the accepted vampire rules. It breaks the one rule that is a pet peeve of mine by allowing vampires to walk in daylight. To me, that is the one thing that no vampire in any story should be allowed to do. If they can do that then it destroys the whole idea of them being creatures of the night, which is fundamental to the whole concept. They keep the rule that vampires have no reflection in mirrors (because no one would ever notice that?) but sunlight has no effect?

Benjamin Walker looks the part of Lincoln, but plays it so straight as to be rather dull. To be fair to Walker, this isn't entirely his fault, as the script is so deadly serious and director Timur Bekmambetov seems more concerned with staging cool looking fights then he does with creating an entertaining movie. Dominic Cooper as the vampire Henry is the most interesting character in the whole movie, but his part is kept relatively small.

The script is rather simple and not particularly memorable. Rufus Sewell is a walking cliche as the villain and seems more bored than threatening. The issue of slavery is given no depth with Lincoln's attitude towards it kept very modern and saintly.

This is a movie that should have been over-the-top and a lot of fun. By taking itself so seriously, it becomes just another vampire movie, of which there are far too many right now. Apart from its historical setting, it has nothing new to offer to the genre. 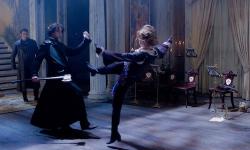 There were two good options for the film makers to go in when considering this story.  The first was, as Scott wrote, to play up the whole concept with a lighter touch.  Think of A Knight's Tale (2001).  It took a historical setting, added modern songs and attitudes and came up with an extremely entertaining film.  (It also starred Rufus Sewell as the heavy.) The only creativity novelist/screenwriter Seth Grahame-Smith applied here was the title. With all the unfounded gay rumors about Lincoln, I am sure he could have come up with something to create a laugh.  Then again, Grahame-Smith was the creator/writer of "The Hard Times of RJ Berger", which was likewise based around a single gimmick.

The second option, historical accuracy, is hinted at but could have been better explored.  Grahame-Smith could have wrote this story of Lincoln's life based on facts, but added a secret life of vampire hunting. Some historical events, like the battle of Gettysburg, are depicted but not enough to make this story interesting.  In the film, Lincoln and Todd are shown marrying and having one son, Willie.  In real life they had four sons, Robert Todd, Edward, Willie and Tad.  Of which, only Robert lived to adulthood.  Scott mentioned Lincoln's mothers death.  Would it not have worked script wise, to have him witness her murder but then have his father tell him it was from spoiled milk to try to simplify her death for a grieving child?

Instead of either of those ideas, Abraham Lincoln: Vampire Hunter is nothing more than a blood letting of victims and killers.  If a spray of blood moving in slow motion across the screen turns you on, then by all means enjoy this film.  I expect this movie was written for teenagers, as only a undeveloped brain could enjoy the ridiculous chase on horse back.  By horse back, I mean Lincoln and a vampire run and jump from one stampeding horses back to another.  Then again, what should you expect from a film about a humorless ax wielding ninja President hacking his way through the un-dead? 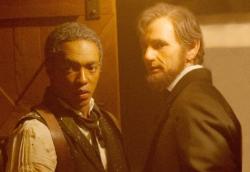 I was one of those people cracking up at the trailer for this movie. Abraham Lincoln: Vampire Hunter is the funniest -and most unlikely- title I've heard since the first time I learned what a Teenage Mutant Ninja Turtle was. Having just watched Steven Spielberg's Lincoln it was interesting to compare it to this low brow horror movie take on our 16th President. It's hard to imagine two more different versions of the life of a true historical figure.

I was going to point out the many anachronisms on display here before I came to my senses and realized just how silly it would be to mention any historical inaccuracies in a movie where Abraham Lincoln is portrayed as an ax wielding vampire hunter.

A Scott mentioned, it's a completely ridiculous idea that gets treated with all the seriousness of a Holocaust documentary. Vampirism as a metaphor for oppression isn't a bad idea per se, but this movie takes it far beyond the symbolic stage and flat out states that the Confederacy was infested by a bunch of blood sucking demons. The violence and CGI effects are properly over-the-top but the main concept is so bizarre that it needed a tongue-in-cheek, self-aware, campy attitude. Instead the cast all act like they're doing Hamlet. Eric, I'm not sure how it would have helped to go the historically accurate route given the plot's central conceit.

I actually enjoyed the early parts of the movie more (slightly more that is). It would have made more sense if they had kept it smaller and confined the action to the life of the young Abe Lincoln. This would also have left room for a sequel which, given the disappointing box office performance of the movie, now seems unlikely anyway. Once you have vampires invading the White House and a Rebel army of blood suckers on the battlefield at Gettysburg it all becomes too much. This is not an idea whose time has come.

Like so many modern movies it's visually impressive. Today's CGI allows directors the artistic freedom to recreate any time period and setting in glorious and realistic detail. But like all advances in technology it's a double edged sword for it seems to have lowered the standards of screenwriting. Abraham Lincoln: Vampire Hunter needed a more self-referential script and a cast that understood the inherit campiness of the plot. Or better yet it just shouldn't have been made at all. 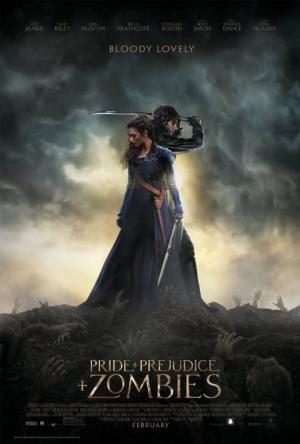