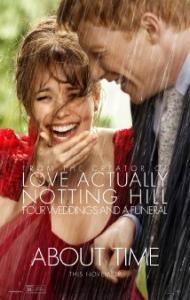 Rachel McAdams and Domhnall Gleeson in About Time.

You know what you're going to get with some filmmakers and writer/director Richard Curtis definitely falls into that category. All of his movies tend to be romantic comedies centering around an affable British cast of upper class, eccentric characters. The only real difference with this, his latest, film is that he's thrown time travel into the mix.

Domhnall Gleeson (son of actor Brendan Gleeson) stars as Tim, a part that would have surely gone to Hugh Grant just a few years ago. The rest of the film is populated with other stock Curtis characters. There's the eccentric girl who's friends with the main character who appears this time in the form of Kit Kat, Tim's sister. The dim, upper class character, here in the form of Tim's uncle. And of course, the American girl for our hero to fall in love with. All of these and other tropes that date back to Curtis's 1994 hit, Four Weddings and a Funeral, are trotted out here.

Tim learns on his 21st birthday from his father, played by the always enjoyable Bill Nighy, that the men in his family can travel through time. More specifically, they can relive any moment in their life as many times as they want and even change their present by making different decision in their past. Why this is or how it's possible is never delved into. You just have to accept it in the same way that Tim does. You also have to accept that the rules of Tim's ability to time travel seem to change as the story progresses, but to focus on that is to nitpick needlessly. Ultimately, the time travel aspect is simply a metaphor for appreciating your life and the time we're given to live it.

The main thing Tim uses his new found power for is to find love. Like the film Groundhog Day, he relives moments over and over again until he makes the moment work out to his advantage. Most of these moments involve the love of his life, Mary, played with bland sweetness by Rachel McAdams. He woos, marries and starts a family with her, smoothing the path to happiness using his time traveling ability. Depending upon your mood, you may find this romantic or possibly a little creepy, given that he never tells her about his ability. This is the biggest flaw in the romance. She's supposed to be his true love, but he keeps this vitally important aspect of himself a secret.

Apart from Mary, Tim's strongest relationship is with his father. Nighy has a delightful charisma that is put to good use. According to him, he's used his time travel abilities to read as many of the world's books as possible. He's the one Tim turns to whenever he needs help or advice, whether it be in the present or in the past. He's also the character to generate the most genuine emotion near the film's climax.

The love story is sweet and your enjoyment of it will depend upon your ability to tolerate such things. It's not a classic love story by any means, but at least Tim and Mary are fairly likeable characters and at the very least you want to see them end up happy.

While those two provide the romance, the comedy is mostly generated by the supporting cast. Tom Hollander is a scene stealer as the grumpy playwright as is Joshua McGuire as Tim's bumbling friend Rory.

This isn't Curtis's best film, but if you enjoyed his earlier work, you're bound to find a few things to like about this one. He's said that this will be the last film he directs, although he will continue to write them. This is probably for the best. He brings no particular visual flair to the proceedings and the film does run long at around 2 hours. He should also use the time he'll gain by not directing, to break away from his tried and true formula and try something a little fresher. 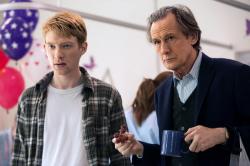 Domhall Gleeson and Bill Nighy in About Time

Time travel as a metaphor for appreciating the time your life allows is hardly a subtle message but it is one worth hearing, especially for those of us who have developed routine lives. Stop and smell the roses is a cliché but a very important one. My enjoyment of this film had more to do with timing than my ability to tolerate it. I saw this film just before visiting my father-in-law in the hospital, who is slowing succumbing to cancer. Instead of simply driving home afterwards, I took my wife out and we did not get home until late. There were some roses to be sniffed.

For me, the relationship between Tim and his father is far superior to that of Tim and Mary. One of the more obvious jokes in the film is when Tim repeats his first sexual encounter with Mary several times until it becomes the best sex of each of their lives. However, such a situation also belittles their love story. Falling in love with a man who has an endless supply of do-overs is hardly a sincere love story. His ability allows him to manipulate any situation, thus we must question just how real Mary's love for Tim truly is.

We have the scene where Tim has an opportunity to have sex with the hot blonde but turns it down with the knowledge that it is not as important as it once was, as he is in love with Mary. That scene is romantic and sweet, but we needed a scene where we discover why Mary loves him. One that has nothing to do with any knowledge he gained through time travel. Would she have fallen for him if he knew nothing of her affection for Kate Moss or fumbled his way through their first night of sex? We do not know and thus their lives together seem built on fabricated lies.

As Scott wrote, Tim keeps his ability a secret from Mary, while Tim and his father have a sincere relationship. Whenever Tim sees his father in the past, his father almost instantly knows it is a time travel visit. Eventually, Tim starts to recognize the same thing in his father. At one point he asks his father if they have had this conversation before.

Tim’s father is his mentor and best friend. He is his best man at the wedding. He seeks counsel from his father, who always looks on knowingly and advises him to not seek out riches through his ability but to merely have a wonderful life. What a great testament to Tim’s father is his mother stating that she has no interest in a life without her husband? Of course, how many do-overs has his father employed to make her this happy?

We do not have the ability to travel through time and so the sweet old saying of enjoy every minute applies to us all as that elusive secret to a happy life. That line may sound tired but there is definitely some truth in there. Most of us will never be given millions of dollars for doing nothing. We all must appreciate the time we have with what and who we have.

About Time is not a deep or vastly romantic film but it contains a little reminder that life is really just about the people we have around us and the happiness we can find with them. 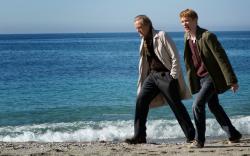 Bill Nighy and Domhnall Gleeson in About Time.

Like with all movies containing time travel plots you can't examine this story too closely without seeing the flaws in its logic. The secret to enjoying it is to not question any nagging little details. We all exist under the same conditions time-wise. It is what novelist Milan Kundera called “the unbearable lightness of being”. The fact that you get just one shot at every second of your life. Therefore the idea of someone being able to travel back in time and take an endless number of tries at any given situation is a wonderful daydream.

In addition to the similarities Scott mentioned, nearly all of Richard Curtis's films tend to combine humor with overt sentimentality. About Time is no exception. The first half of the movie has a lighthearted tone that gets quite silly at times. While describing his time travel abilities to his son the dad, played by Bill Nighy, tells him its limitations, “You can't kill Hitler or shag Helen of Troy.” The second half of the story, however, turns dramatic and a bit mawkish. The scene where father and son (as a boy) walk along the beach hand in hand was a bit obvious for my tastes.

Eric brings up an interesting point about the relationship between Tim and Mary. Tim manipulated time to win Mary's affections by trial and error. By going back and correcting his mistakes he is able to become Mary's ideal man. But the question remains who is the real Tim? If you can keep changing your actions until you get your desired result wouldn't you eventually become mad with power and risk losing your humanity? Not in Richard Curtis's world anyway. This is a safe, shiny place, where comfort rules and people behave nicely.

Lately time travel plots have become commonplace. In fact they are being overused these days. Take Rachel McAdams (please). In the past five years she has played the wife or fiancee of a time traveler in no less than three movies. This movie, plus The Time Traveler's Wife (2009) and Midnight in Paris (2011). The poor thing never gets to do any actual time traveling herself though. You might say she's always a time traveler's bride but never a time traveler.

The best thing I can say for Richard Curtis is that you know what to expect from him. As Scott said, If you enjoyed his earlier work you'll most likely enjoy this movie as well. One thing that works in the movie's favor is the casting of Domhnall Gleeson in the lead role. Despite his unfortunate first name, he's quite appealing in a part that dominates the story. He has charisma and talent and he makes Tim a very likable guy. Which is also how I would describe About Time, likable.