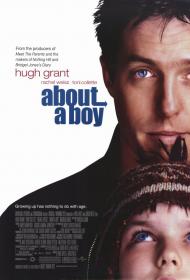 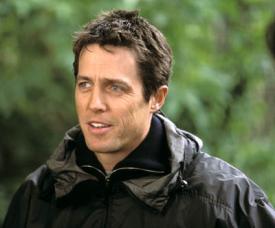 Hugh Grant in About a Boy.

'No man is an island,' said John Donne, or was it John Bon Jovi? Well, whoever said it, Will Freeman (as played by Hugh Grant) lives his life by that philosophy in the brilliantly warm, funny, touching, and emotional movie About a Boy. He spends life wallowing in the shallower things of life, the latest gadgets, DVD's, computers, CD's, and relationships that last just long enough for the woman to realize what a selfish person he is before they break up with him, thus saving him the bother of having to break up with them.

Perfectly content with his life of leisure, and never having to had a work a day in his life, thanks to the royalty money he earns from a classic Christmas song that his father wrote back in the 1950's, Will sees no reason to change anything about it. He divides his days into unit's of time, each exactly one half hour long, since most things take about a half-hour to do.

When a friend sets him up with a single mother, he realizes that he's hit upon a gold mine of short term relationships. Here is a group of women who will think he's a great guy simply by comparison to the 'bastard father' of their children. There will be lots of great sex since they want to know they're still desirable after the husband's/boyfriend's rejected them. And eventually there's the easy way out since there's always that connection between the child and their real father so he can excuse himself out of the relationship claiming he doesn't want to get in the way of that, or if he's really lucky, the single mother will get back together with the father and he won't even have to do the breaking up himself.

Clearly Will is a selfish bastard, thinking only of his own needs and desires. When a friend asks him to be the godfather to her daughter, Will begs off because, 'I'll be horrible. I'll forget all her birthdays and school recitals, until she turns 18, when I'll probably take her out for a drink, and well let's face it, probably try to shag her.' Yet somehow, thanks to Hugh Grant's performance and innate likeability, and the witty script, you don't hate him. You might feel sorry for him, but never hate or dislike.

Marcus is the twelve year old son of a suicidaly depressed single mother. He's also a loner, but unlike Will, it's not by choice. He's slightly odd, and his mother dresses him the way any good vegetarian, ex-hippy would. When he gets nervous or distracted, he sings out loud without realizing it. He's as unhappy in his life as Will is happy in his.

The two boys finally meet when Will goes on a picnic with another single mother who is a friend of Marcus's mother, and she brings Marcus along because his mother is in one of her depressed states. Will, who is only interested in shagging the single mother, pays no attention to Marcus until Marcus inadvertently kills a duck with a large loaf of bread (you have to be there), and Will helps him stay out of trouble because of it.

When the three return to drop Marcus off at his house, they find his mother in the living room with an empty bottle of pills clutched in her hand. They rush her to the hospital where they are able to save her. Marcus, who has already had to assume the parental role with his mother, realizes that two people just isn't enough. He needs someone to look after his mom when he's not around. He decides she needs a husband. He decides to set her up with Will.

Marcus then begins the long process of inserting himself into Will's life. He starts going over to his apartment after school, not leaving until Will let's him in. Soon the two develop an odd sort of camaraderie, and although it becomes apparent that Will and his mother will never get together, Marcus continues coming over because he realizes that for the first time in his life he has a friend.

Will on the other hand discovers, that once he's let Marcus into his life, he's left the door open to others. He falls in love with Rachel, another single mother. Still being the same person as always though, he tells the woman (played by Rachel Weisz of The Mummy fame), that Marcus is his son, so that they'll have more in common. The difference this time is that he's finally, and sincerely in love.

When Rachel discovers the lie, she breaks off the relationship and it's up to Will to decide whether or not he'll go back into his old life or try to keep going. Marcus on the other hand is worried that his Mom is going to try to commit suicide again and is desperate to help her. They both have decisions to make, and only each other can help.

By the end of the movie Will and Marcus have both grown into something more. Will has opened himself up to others and Marcus has realized that life can be more than just depressing. And we the audience have also learned something. We've learned that a movie can be touching, sweet, and sentimental without ever being sappy or cloying. It can also be incredibly funny and dramatic at the same time. 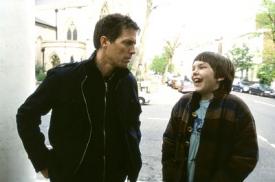 Hugh Grant and Nicholas Hoult in About a Boy.

Scott's lengthy review covered almost everything. The one area he left me is the actual relationship between Will and Marcus.

I once read that Henry Fonda and Jimmy Stewart were great friends. Apparently they were into building models. They would spend hours together working on them but would rarely talk. They just enjoyed each others company. Perhaps they were so much alike that they did not always have to speak. Just the presence of each other made them feel better.

This describes the relationship between Will and Marcus. Although he is an adult and Marcus is 12, they do have much in common. Both are lonely. Will convinces himself that he is happy, yet he truly isn't. He complains about everything. He has very few friends. Marcus wants to fit in at school and make friends but has no clue about how to do it.

Will gives Marcus confidence and sound advice about life and getting along with it. Marcus gives Will a relationship that he is unprepared for, but finds he needs none the less. Both grow immensely due to their friendship. This is a funny movie that looks at a relationship that often gets ignored in movies. 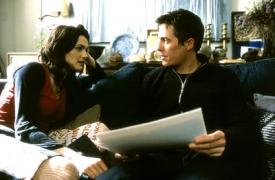 Rachel Weisz and Hugh Grant in About A Boy.

The only thing I disagree with about Scott's review is something Eric touched upon, the fact that Will is not really happy in his solitary and selfish existence. He knows something is missing, just doesn't have a clue as to how to find it, in fact, at the beginning of the movie he can't even name it.

Eric is fond of ripping apart movies that show nontraditional families in a positive light. I find it interesting that he let this one go, since the final scene at Christmas could be a recruiting poster for alternative families. We have two single moms, each with a teenage son, the boyfriend of one of the women, who happens to have formed a very strong bond with the other woman's son, and the son's punk-rock girlfriend. Perhaps because this movie does such a great job showing the dynamics of all of these different relationships as they grow and change over time that Eric left it alone, or maybe he's just mellowing, but I doubt it.

At any rate, About A Boy is one of the funniest, and most touching movies I've seen in some time. Hugh Grant has never been better and Nicholas Hoult is a revelation as the troubled yet spirited Marcus.