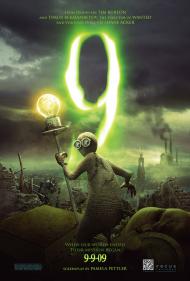 9 is a feature length version of the 2005 Best Animated Short Oscar nominee. Visually it's very well done, especially the look and feel of the main characters. The story doesn't match the animation though and has a kind of been there done that feel to it and mainly seems to be comprised of one chase scene after another.

The setting of the film is a post-apocalyptic one. Machines have rebelled against mankind (think Terminator-lite) and all life is dead; the city where the story is set is in ruins. The only signs of life that appear are small mechanized steampunk robots with various cloth skins, from burlap to garden gloves. Each of the robots bear a number on their back from 1 to 9 and each possess a personality as distinct as their designation.

Nearly the first ten minutes of the film are without dialogue. Number 9 wakes up and is unable to speak. Neither he nor the audience know who or what he is and what this strange world is all about as he sets out to explore it. It's the best ten minutes of the movie. The rest of the story, with its one last machine trying to finish the job of exterminating all life, never lives up to the set-up.

Not that I want to be too harsh. There are some really cool scenes and animation and the voice talent is top notch. At an hour and fifteen minutes there's not really enough time to get bored even though a good part of the story feels like filler. If anything the bits that do work, work so well that it sets up an expectation that the rest of the movie ought to be excellent. Particularly the dark mood that is created during the opening sequence certainly lead me to believe that a more complex plot was coming.

In many ways the visual elements of the story reminded me of a next-generation video game. The various running around action scenes would certainly lend themselves to gameplay. Of course, the problem is that we're not controlling the Numbers, we're only watching them. And anyone who's ever watched someone else play a video game for over an hour knows how entertaining that can be.

Debut director Shane Acker certainly has a visual flair and I'm sure he has a career ahead of him. Next time though he just needs a script that matches his vision.

Number 9 awakens to a strange world in 9.

Clearly the story was padded to stretch this short film out to feature length. I agree that some of the chase scenes get a bit repetitive, but the setup is intriguing enough and the visuals impressive enough to overcome this flaw. And, like Scott pointed out, with a run time of just an hour and 15 minutes there isn't time to get bored while watching it. Its post-apocalyptic setting is bleak but it ends with hope.

The numbered characters themselves are outwardly original in design although they are also each a familiar type. “Stitchpunks” is the name Shane Acker has given them and it fits, as they appear to be part cloth doll, part robot. Each represents a different part of their inventor's personality and they are the last hope for life on Earth. They battle a clever variety of evil machine monsters in an escalating war to the finish.

9 is the hero of the story. He represents the optimistic side of the scientist's humanity. He is brave, intelligent and curious. Elijah Wood gives him an eager cheerful demeanor. 2 represents the scientist's genius, he is voiced by Martin Landau. 3 and 4 are nonspeaking twins who act as the group's historians. John C. Reilly gives voice to 5, the Stitchpunk's healer. Number 6 is the sensitive, artistic one. Jennifer Connelly speaks for number 7, the lone female Stitchpunk and the warrior of the group. 1 is the oldest Stitchpunk, he is also a pragmatist and a bit of a coward. Christopher Plummer provides his voice. Number 8 is the largest and dumbest of the group, he acts as 1's bodyguard.

This movie contains many nice little visual and artistic flourishes and homages. The evil robot battle machines look like the tripods in War of the Worlds. The bombed-out building the Stitchpunks call their sanctuary is actually the Cathedral of Notre Dame, which was also famously referred to as sanctuary by Quasimodo in The Hunchback of Notre Dame. In one of the movie's best scenes the Stitchpunks play an old phonograph record to celebrate after they think they have destroyed the machines for good. The song they play is Judy Garland's iconic recording of “Somewhere Over the Rainbow” from The Wizard of Oz. Their moment of rapture is short-lived, however, and it leads directly to the film's climax.

9 is visually stunning. Sure the storyline isn't exactly new, but it tells its familiar tale in a decidedly original manner. It is bursting with creativity and it features solid voice work from the famous cast. It is definitely worth seeing if you haven't already.

So many questions, so few answers.

The most fascinating aspect of 9 is the setting of the film. Nothing is explicitly explained but enough clues are given that we can figure out where and somewhat when this takes place. As Scott wrote, it is a post-apocalyptic world where machines have destroyed mankind and laid ruin to everything in sight. Patrick mentioned Notre Dame, announcing that the destroyed city the Stitchpunk robots roam is Paris.

The time period can be determined by the technology. Although Stitchpunks and the beast are technical advances beyond our understanding, they are constructed from common objects found decades ago. The abandoned vehicles look from the 1940s. When 1 explains the war, “Man and machine attacked each other with fire and metal.” It seems out of a World War II film. The Wizard of Oz came out in 1939. We are never told how long the war lasted but we can determine that this takes place sometime in the late 1940s or beyond.

This film takes place on an alternate Earth much the same as ours. An Earth where a large world war broke out, just as it did here. The country that started the war had a flag that, with its black and red coloring, is somewhat reminiscent of the Nazi flag. The difference being that on this Earth, the Nazi types created a machine that could build other machines to use as weapons. This not only turned the tide of the war but ended up destroying all mankind.

This is clearly an allegory to our world and its pursuit of nuclear weapons and technology as a whole. The film’s opening line, “We had such potential. Such promise. But we squandered our gifts, our intelligence. Our blind pursuit of technology only sped us quicker to our doom. Our world is ending. But life must go on.” explains it point blank. That line is spoken by Alan Oppenheimer, playing the scientist responsible for creating the machine that destroyed the world. Oppenheimer is the cousin of J. Robert Oppenheimer, who was one of the theoretical physicists who worked on the Manhattan Project, which developed the first nuclear weapons used in World War II.

The part Patrick called, “one of the movie's best scenes” is strikingly haunting.  “Somewhere Over the Rainbow” speaks of hope and yearning while this film is about hopelessness and despair. Over the rainbow is a place of dreams, yet machines are incapable of such human imagination. It was a brilliant choice of song.

Although there is an effort to have a, somewhat, happy ending, there truly cannot be one. We are told that gas (radiation) destroyed all living creatures. Thus the mechanized Stitchpunks and the beast are the only “beings” shown. Even though we want the little burlap heroes to defeat the beast and discover the truth, the entire film has a depressing pall about it. There are no humans left. Man is extinct.

Although 9 is an imaginative piece of storytelling, it did not know where to go. The ending is both spiritual and political. We see souls going to heaven and hear a not so subtle narration, “This world is ours now. It is what we make of it.” What is there to make? These are little machines that cannot reproduce. It should have ended with the discovery that each Stitchpunk was actually connected to a human in hiding, that could not come out because of the gas. Thus the ending would have actually had some hope with the possibility of life renewing itself.