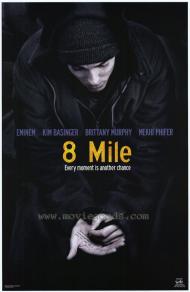 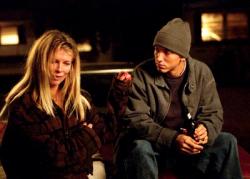 Kim Basinger and Eminem in 8 Mile.

Whenever a music star attempts to make the transition to movie star they are almost always met with skepticism and (as was the case with Mariah Carey) outright derision. Some music stars truly have no acting ability or screen presence and some (like Mariah) simply choose bad scripts and/or directors. Eminem makes none of these mistakes and easily has the best and clearly most commercially successful movie debut by a music star in years. And although the central plot hinges on the stars rapping ability this is not a musical. There are less than 10 minutes of screen time showing the star rapping.

The plot is based on the real life of Marshall Mathers, a.k.a. Eminem. It tells how he overcame a white-trash trailer-park existence to become accepted and respected in the mostly black world of hip-hop in inner city Detroit. It is set back in 1995. You remember, back when quaint sayings like “Peace-Out" and “That shit was dope, Yo" were popular. Our hero, called Rabbit in the movie, lives with his white trash mother (Kim Basinger slumming it) and his young sister and works in an auto parts factory. He hangs out with his friends and dreams of being a big-time rapper. Think Saturday Night Fever with rap music instead of disco.

There isn't much of a plot but the story moves along at a decent pace and Eminem - although the part is certainly not a stretch - shows that he does understand the need to play things down in front of the camera. And he is an incredibly charismatic and gifted rapper.

In an obvious bid to attract a larger audience, his image is presented here in a sanitized version. Once known for spitting homophobic lyrics, he is actually shown standing up for a gay co-worker. Likewise all Mother hating lines about murder and rape are deleted. Instead he shows his mother as an irresponsible drunk and himself as the family's staunch supporter.

What there is of a plot revolves around a weekly rap contest. In the first scene Rabbit gets stage fright and is unable to perform. So of course the final scene is his revenge; where he finally gets to unleash his famous gift for rhyme and rhythm. It is a truly star making moment that will have you cheering along. 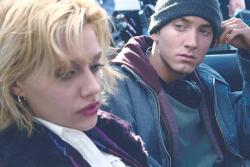 Brittany Murphy and Eminem in 8 Mile.

I have never been a fan of rap music. It always seems to either have the same old beat or the music is stolen from a real song. I once spent an hour arguing that the rap song Gangster's Paradise was actually a Stevie Wonder song called Past Times Paradise. The music and chorus are.

Once while I was in the Navy I was assigned, with this other guy, to take trash to the fantail and dump it over board. He was singing some rap song as we did it. I told him I just didn't get rap music. "It's poetry." He explained, and on the spot he made up a rap song about him and I dumping the trash overboard. So, rappers are poets who by no means have to actually have any real musical talent. They just recite their poetry to the rhythm of the music.

With all that said, I watched 8 Mile with the understanding that rap music is a very big deal to some people. Patrick wrote that the "plot revolves around a weekly rap contest. In the first scene Rabbit gets stage fright and is unable to perform." The point of this movie is not the weekly rap contest or Rabbit overcoming stage fright. Stage fright is when you just get nervous about being in front of people. The real fear Rabbit has is that he may not be as good of a rapper as he hopes. Throughout the whole movie you see two constant themes. One is that Rabbit has a lousy life. The other theme is that his friends and he talk constantly about making a rap demo and making it big. That is Rabbit's dream and his one escape from his pathetic world. He failed on stage the first time not out of stage fright, but out of a fear that if he doesn't do good he could lose the one piece of hope he holds dearly to.

I like Patrick's description of Eminem underplaying his acting. He really is not so much acting as he his reenacting his own life. Eminem is very convincing at playing himself. When he plays a 19th century British pirate we can discuss his actual acting talent.

Bassinger is under-used in her limited screen time as a trailer trash slut. Rabbit's friends are all stereotypes. There is the wannabe black - white guy, the fat, funny guy and the black conservative, who spouts lines like, "respect yourself." For a movie about a unique person, it certainly contained some unoriginal characters.

The worst thing for me in this movie is also a compliment. The movie ended without ever saying if he makes it out of the neighborhood. Sure he faces his life head on and he is a stronger person, but I actually cared enough about this guy that I wanted to know where he ends up.

This film carries an amazing amount of emotion. Through Eminem's portrayal I found myself drawn into the movie. I liked Rabbit and pitied him at the same time. Perhaps this is Eminem's charm. So often on stage at awards show's he comes across as passionate and intense, yet nervous and surprisingly soft spoken. Whereas most rappers seem to rap about how tough and great they are, Eminem often raps about his insecurities and weaknesses. Through his rap songs and this movie, he allows people into his life in ways that most performers never do. 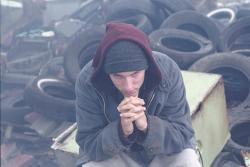 I put off seeing this movie for as long as possible. Knowing Eminem and his style of music and judging by the previews from its initial theatrical release, I assumed that I was about as far from this movie's target audience as it was possible to get. It's a credit to the cast and crew of 8 Mile that almost against my will I was pulled into the movie and ended up caring about Rabbit.

It was the characters in the movie that pulled me into it. What Eric refers to as stereotypes and unoriginality, I saw as realism. Growing up in Michigan I knew people like the ones in this movie. There's a reason stereotypes get started in the first place.

The realism isn't only extended to the characters. What makes this movie stand out from most "I'm going to make it big as a singer/actor/dancer" movies like Glitter or the more recent Honey is that Rabbit doesn't end up a mega-star. In truth, this is more like the original Rocky, in that instead of proving something to the world by becoming incredibly and unrealistically successful, the main character proves something to himself instead.

I'm still not a fan of Rap music or Eminem, which is fine because Rap music isn't what this movie is about at all. It's about believing in you even if no one else will. And that's a positive message no matter what the medium used to express it.