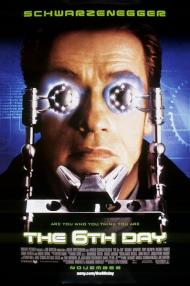 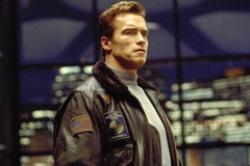 Whatever happened to Sylvester Stallone and Arnold Schwarzenegger? Their name on a marquee use to mean an instant box office hit. This year Sylvester Stallone did a remake of Get Carter. Did anyone see that? Arnold gives us The 6th Day. Another disappointment.

In The 6th Day, Arnold stars as a man who is cloned to cover up a murder. Yeah, the movie is as far fetched as it sounds. There are tons of special effects and explosions. Lots of action and a little suspense. There is, however, no characterization to speak of. Arnold is your average family man who kills lots of people when he's threatened.

The movie could have been a lot more intellectual in dealing with the subject of cloning. The moral/ethical implications are only touched on. Cloning is nothing but a grotesque gimmick in this movie. Robert Duvall is wasted as the scientist responsible for creating the process to clone humans. He's a modern day Dr. Frankenstein.

The action is average movie fare and some decent humor is slipped in. The best line being when Arnold tells Tony Goldwyn, "You should clone yourself while you're still alive." Goldwyn asks, "So I can get a perspective on your situation?" Arnold responds, "No, so you can fuck yourself!" Arnold even does a twist on his signature line, when he says, "I might be back." It is not enough however, to help this movie out. Arnold needs to be a lot more picky when choosing roles. 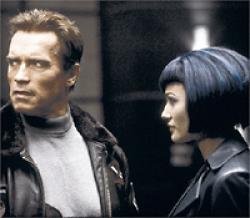 This is a movie in love with technology. Every opportunity is used to show wonderful and exciting uses of it. The movie rotates around it and some of the funniest and entertaining scenes are those when they are showing it. The Sim-Pal Cindy scene is the best example, along with the virtual psychiatrist. If only the same care and attention were used in the script. Sadly, it was not.

This is a movie that doesn't know what it wants to be. Is it an action film? A comedy? A philosophical discussion on the morality of cloning? It attempts each of those, but never achieves any of them.

As an action movie, it rings flat with a feeling of been there, done that. It offers nothing new. All of the bad guys went to the Stormtrooper school of marksmanship in that they all have heavy firepower but can't hit the broadside of a barn. Arnold is indestructible and although a family man, he kills without compunction. There are never any moments of real tension.

As a comedy it is most successful. It has fun with technology as I said. I did laugh a few times. But only a few times. There aren't enough of these funny moments to sustain the movie.

Without an actor of Robert Duvall's caliber, this movie would never have attempted the philosophical discussion of cloning ethics. His scenes with his wife seem to be from a different movie altogether. He is almost as out of place in this movie as DeNiro was in The Adventures of Rocky & Bullwinkle. It is always sad when great actors take part in pathetic movies for such obvious financial reasons. Needless to say, as a deep, meaningful movie, this one fails miserably.

Is Arnold just a dinosaur left over from Reagan's eighties mentality? Can he ever have a hit again? He'll try with Terminator III, but I seriously doubt he will ever have a success again. But this is Hollywood, a world where anything is possible. 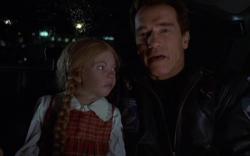 Sim-Pal Cindy and Arnold Schwarzenegger in The 6th Day.

Scott, your last paragraph is quite ironic when you consider the fact that Arnold Schwarzenegger was elected Governor of California in 2003. Not only was he a dinosaur left over from Reagan's eighties mentality he also tried to emulate Ronald Reagan's success as a politician. Indeed anything -it seems- is possible in Hollywood. Although the fact that he wasn't born in the United States bars the former bodybuilder from ever seeking the presidency (unless of course that law is ever changed).

Like my brothers I enjoyed the comedic aspects of this movie better than the action scenes. The writers came up with several amusing ways of envisioning future technology. The Sim-Pal Cindy doll is hilarious. They gave her the perfect facial expression (see photo). Equal parts cherubic and demonic. I also laughed when Arnold's daughter holds up two bananas and asks her father, “Nacho or regular?”

Unfortunately the movie is more interested in being a run-of-the-mill action flick with a high body count. I guess they figured giving the audience two Arnold Schwarzenegger's for the price of one was a good idea but it just makes it difficult to distinguish between the real one and the clone, and even more difficult to give a shit about either one.

This movie takes the idea of cloning to the next level. Not only is the person's DNA precisely replicated but they are able to insert the person's (or animal's) actual memories into their brain. In other words immortality is possible. This is hardly an original concept. Frank Herbert thought of it decades ago while writing his Dune series. The 6th Day raises the complex moral question of whether or not a clone has a soul. But it quickly loses interest in the answer and settles for being a big budget special effects driven Arnold Schwarzenegger action vehicle.