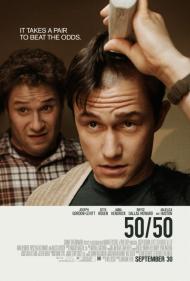 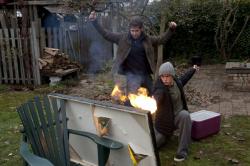 Seth Rogen and Joseph Gordon-Levitt in 50/50.

50/50 is a movie rarity. It’s a tear jerker aimed at men that doesn’t involve sports. Actually that’s not entirely true. Yes 50/50 deals with someone getting cancer (the title refers to his odds of survival) and it did bring a tear to my eye but it is also a buddy comedy that plays terminal disease for laughs. And even in its most heart tugging moments it is never mawkish.

Joseph Gordon-Levitt stars as Adam, a 27 year old radio writer living in Seattle who discovers he has a malignant tumor on his spine after going to the doctor for back pain. Gordon-Levitt is really good here. He makes Adam an easily relatable everyman as he goes through the stages of shock, grief and anger. Rachael, his initially supportive girlfriend (Bryce Dallas Howard proving once again she plays the best bitch in movies), cheats on him while he’s going through chemotherapy.

With the help of his wise-cracking best friend Kyle (a restrained Seth Rogen), his overbearing but loving mother Diane (Anjelica Huston making the most of her few scenes), and a young mental health therapist named Katherine (cute as a button Anna Kendrick) Adam learns to cope with his life threatening illness. He also befriends a few older guys as chemo buddies who introduce Adam to the benefits of medicinal marijuana.

50/50 is about cancer and it does have its share of emotional drama but first and foremost it’s a comedy. And a damn funny one at that. It doesn’t shy away from jokes dealing with the disease; I mean how many movies have a character use having cancer as a means to get laid? The scene where Adam gets sedated for surgery is hilarious. “I’m high as a motherfucker.” He states with an incredibly silly grin spread over his face. He tells Katherine, as she is seated on the edge of his hospital bed, “I’m peeing right now.”

The resonance of the script is due to the fact that screenwriter Will Reiser based the story on his own real life battle with a rare form of spinal cancer. At one point Adam expresses frustration at the fact that everyone pussyfoots around the fact that he might very well be dying. 50/50 takes a potentially tragic situation and makes it funny. It is a testament to the old adage that laughter is the best medicine 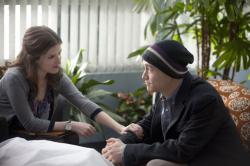 Anna Kendrick and Joseph Gordon-Levitt in 50/50.

The only thing in your review that I disagree with Patrick is when you say it plays a terminal disease for laughs. I think the main reason it works is that while it does feature a lot of laughs, it never directly plays the cancer as the punchline. It manages to balance the very thin line between its jokes and the drama of Adam facing a potentially deadly disease.

I'm not always a fan of Rogen's but he is the comic highlight here. He plays the same party boy, slacker character he always plays but with the well written script he comes off better than he normally does. Gordon-Levitt and Rogen make a good odd couple, with Gordon-Levitt playing the straight man, although he does generate his own laughs and is the emotional center to the story. He continues to impress me as an actor.

Anna Kendrick is cute as button. She's the best thing to have come out of the Twilight movie franchise and I hope her career continues long after those movies are forgotten. Here her awkward chemistry with Gordon-Levitt is touching and sweet.

It's obvious that the filmmakers made a deliberate attempt to try and keep the story from becoming too depressing by focusing on the humor of the situation. The potential tragedy is always there below the surface, tinging even the jokes with a touch of sadness, but never lingering so long as to become depressing.

It's not easy for a movie to move so naturally from comedy to drama, but that's exactly what this one does and it's equally successful at both. 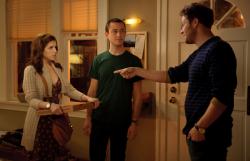 50/50 is not at all about cancer, Patrick.  It is about improving your life.  Any number of diseases could be substituted for cancer and the script would not have suffered.  Adam becoming ill, is a wake up call that he has become complacent to his life.

After finding out he has cancer, Adam discovers that his girlfriend is not some one he can rely on or trust.  His best friend, Kyle, originally came across as nothing more than a party animal, but we later learn that he would do anything for Adam, and has a heart of gold.  Adam also comes to understand his mother, whom he has ignored for a long time.

50/50 has several nice pieces of symbolism, such as the title of Rachael's paintings, "Liberation" and "Oppression."   Both of those words can easily describe what Adam goes through.  The most obvious one is when Adam watches the news report on the volcano that he is writing a story on.  The reporter states that the volcano was thought to be dormant but came back to life and erupted.  My favorite metaphor is when Adam and Katherine clean the garbage out of Katherine's car right after they talk about their exes.

Cancer has been featured in so many movies that some early scenes already seemed old, even though I had never seen this film before.  The ending is likewise too simple.  However, it has been a  while since a movie made me cry.  Any movie that can engage it's audience so well is doing something right.

What keeps 50/50 fresh is the cast.  Gordon-Levitt, Rogen and the adorable Kendrick keep us watching as the three of them try to deal with new situations.   None have all the answers, but all of their character's hearts are in the right place.  Even when they do not know what to say or do, we can see on their faces that they are trying to figure the next step out.

In that is the message of 50/50.  Adam was living a life he thought was fine, even though we, as well as Kyle, can see he is not living up to his potential.   His personal life is not very satisfying.  His job is frustratingly dull.  He has settled for what life has so far given him.  The cancer, and the nudging of his friend and therapist, help put everything into perspective for him.   He needed to take some big steps in life, and it took getting a life threatening disease to make that clear.