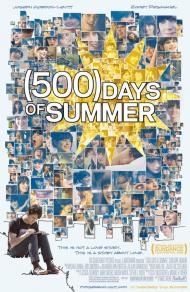 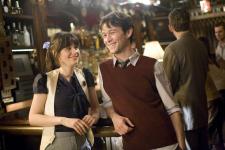 Zooey Deschanel and Joseph Gordon-Levitt in 500 Days of Summer.

500 Days of Summer is a romantic comedy in which the roles have basically been reversed. Joseph Gordon-Levitt plays one who falls hard into love while Zooey Deschanel is the partner who doesn't want to commit. Where often in rom-coms, it is the woman who is fully fleshed out while the man remains two-dimensional, here it is the woman who is never quite fully revealed. While that's not really as original as it sounds, thanks to a quirky sense of direction and a couple of likable leads, this is a movie with plenty of heart.

In a style reminiscent of Annie Hall, 500 Days tells the story of a relationship out of chronological order. It lasts, you guessed it, 500 days; from the day they meet until the day they both have closure. The Summer of the title is Zooey's character.

Gordon-Levitt, whose career started as the girlie looking youngest alien on 3rd Rock from the Sun (remember that show?), is an under-rated actor who seems to turn up every now and then in odd places. Here he plays a bit of an idealist. His Tom works as a greeting card writer who falls in love with Summer, the new administrative assistant. He has what traditionally is the girl's role. He falls in love, he wants to know where the relationship is going and he's the one who spends all his time dissecting the relationship with his friends.

Summer's character is more like the cliched man. She doesn't want a serious relationship, she just wants someone to hang around with and have sex with and she's very up front about it. It's easy to say she leads him on, but it's really more a case of Tom idolizing Summer and assuming that she will eventually feel as he does. She is also under developed compared to Tom. Pretty much her only character note is that her parent's divorce made her believe that love didn't exist. By the end of the movie she still remains something of a mystery.

There are a few clever filming techniques used by first-time director Marc Webb that add to the movie. One evening is shown in split-screen with one side being how Tom imagines the night will go and the other showing how it actually went. Another scene shows Tom walking to work in the morning after having sex with Summer for the first time. His walk soon turns into a full-blown musical number to the tune of Hall and Oates' "You Make My Dreams Come True" in a scene that perfectly embodies that feeling of blossoming love that I'm sure all of us have felt at some time or another in our lives. One extra thrown in that I didn't care for was the occasional voice-over narration. It's not needed and it feels intrusive.

Romantic comedies are one of the most common types of movies it seems and yet so many of them are just sappy and cliché-ridden. Only once every five years or so does a really good one come along. Looks like 2009 was the year we were due another one. 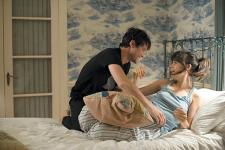 It is all fun and games until some one gets hurt.

Scott, you seem to excuse Summer's actions, because she warned Tom ahead of time of her intentions. I disagree. She knew how Tom felt about her. She took their relationship to a new level when they had sex. After that, they can only go in two directions, get serious or break up. Summer makes the classic mistake of thinking that they can be "friends" after she has clearly become so much more to him. Summer was not intentionally cruel to Tom, but she selfishly used him to pass the time.

As Scott wrote, the movie has many clever scenes. The walk to work scene is hilarious, and symbolic. Almost all of the extras in that scene are wearing blue. Often Summer wore blue. Is the director telling us that, like the dream sequence, Tom exaggerated his relationship with Summer.

I enjoyed Tom's talks with his, middle school age, sister. She acts as his love guru. She gives him sound, although cliched, advice. "There are plenty of fish in the sea." She says, referring to her soccer team mates that like him. "Their just guppies." He reminds her.

500 Days of Summer, ultimately says that love will eventually find you. Like Tom, you cannot force it. Like Summer, you cannot fake it. Time, coincidence, and that romantic of all cliches, destiny, will somehow make it happen. 500 Days of Summer is a romantic, comedic romp through the emotional jungle of love.

Summer was no more selfish than Tom was. He was constantly looking for any sign that she was falling in love with him even though she had already stated that she didn’t believe in love. So what makes his desires more important than hers? Aren’t we all responsible for our own happiness? Eric, you write that Summer faked love. I disagree. She simply had never felt it until she met the man she would marry. Tom certainly did try to force it however, you got that part right.

Scott, I would go so far as to call this movie a west coast homage to Annie Hall. The park bench where Tom and Summer sit looking out at the architecture of old downtown Los Angeles is very reminiscent of Alvin and Annie sitting looking at the Queensboro Bridge. The split-screen scene you mentioned and the non-chronological order plus the fact that we know from the outset that this relationship isn’t going to make it. All pay cinematic tribute to that Woody Allen classic.

Unfortunately 500 days of Summer isn’t as funny as Annie Hall. Sure it has a few clever chuckle inducing moments (Tom seeing himself in famous scenes from old black-&-white foreign movies is one) but it is not really a laugh-out-loud kind of movie. It is a thoughtful bittersweet little romantic dramedy.