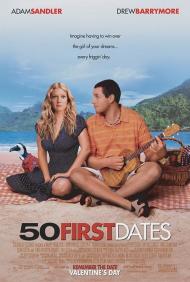 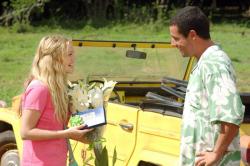 You could think of 50 First Dates as Groundhog Day in reverse. Instead of a man experiencing the same day over and over again, you have a woman waking up and thinking it's the same day over and over again. The simple plot being that Henry (Sandler) meets Lucy (Barrymore) only to discover that because of a head injury she suffered in a car accident, she wakes up with no memory of the day before. Each and every day then becomes a challenge to make her re-fall in love with him.

While that is a premise ripe with possibilities, it is never fully explored because in between the romance are the scenes you've probably come to expect if you've watched any of Sandler's previous work. The humor runs along the lines of a Walrus puking in someone's face, Rob Schneider's character dressing up as a woman and pretending to lick his own coconut covered breasts, and the running gag about the size of a Walrus's penis. It's as if the filmmakers are trying to make a romantic comedy that doesn't alienate the adolescent boys who make up much of Sandler's fan base. The end result is a movie that won't fully please either fans of Romantic Comedies or fans of Sandler's lowbrow earlier work.

What charm this movie does possess comes completely from Drew. She brings a sweet vulnerability to her role that transcends the crass humor so prevalent in the rest of the movie. Her moment of revelation on the dock when she realizes that her brother (Sean Astin in a role that jeopardizes any acting credibility he might have gained playing Sam in The Lord of the Rings) and father have been humoring her every day that it is still the day she thinks is, belongs to an entirely different movie than this one. If by the end of the movie we care for any of these characters it is because of her.

A successful Romantic Comedy blends romance and comedy seamlessly together. 50 First Dates compartmentalizes the two to the betterment of neither. Anyone looking for the magic Sandler and Barrymore generated in The Wedding Singer is going to be sorely disappointed, as I was. 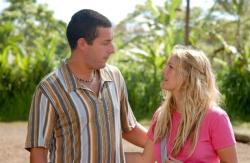 I saw The Wedding Singer. I forgot everything about it. I didn't laugh once. It is nothing to go on about. Scott must have gotten laid just before watching it. 50 First Dates is a better movie. It has an original premise and funny supporting characters.

I laughed at the asexual veterinarian assistant. I thought Astin's lisping steroid hound was worth a few chuckles. He gained weight to play Samwise Gamgee and was probably anxious to play someone in better shape.

Sandler is a sentimental fool. All of his movies have a central plot about love or doing the right thing. His blank, expressionless face is affective when needing pity. Thus he plays lots of losers up against a wall. The weakest part of the movie is the beginning when Sandler unconvincingly plays the stud. The only way he can be considered above average in looks is when he stands next to Rob Schneider. One of Sandler's best lines in the movie is when her dad tells Drew that Sandler is in fact her boyfriend. Drew looks at Sandler, who says, "Sorry I'm not better looking."

The one area I will agree with Scott is that Drew does a great job. I was not attracted to her in the Charlie's Angels movies. Here she is completely adorable. I genuinely felt for her character in the scene where she watches a video that tells her about the past year of her life. "How many times have I watched this tape?" She asks. It is the moment you realizes that she fully realizes her dilemma.

This is not a four star movie because there is really no winners. Sure they get together in the end, but he has to spend all his time explaining everything to her and she forgets everything every day. It is a love story but you really can't say that they lived happily ever after. 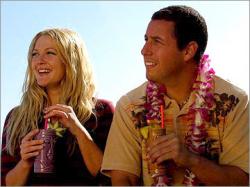 I agree with Eric on this one. I quite enjoyed 50 First Dates. I am not normally a fan of Adam Sandler and I dislike most sophomoric humor. I could have done without the walrus projectile vomiting and any scene in which Rob Schneider appears. I disagree with Scott that this ruins the movie though as the story focuses mostly on the relationship between Henry and Lucy. Their courtship is truly unique and far more romantic and touching than anything I ever expected from Sandler.

I really bought into the romance of the story right from the first scene at the diner where Henry and Lucy meet. As they say goodbye they are both obviously smitten. They each do a little jig of happiness before getting in their cars. A van is parked between them and blocks their view of each other but it pulls away while they are both still dancing. It is a cute little intimate moment between them. I chuckled watching their embarrassment.

SPOILER ALERT: even though Lucy never regains her short term memory the story evolves nicely. At first her father and brother keep her from knowing the truth by elaborately reproducing the events of the last day Lucy remembers, over and over. The next step occurs when she inadvertently discovers the truth. Henry then figures out a better way to tell her by making a video with all the pertinent details she can’t remember.

One interesting bit of trivia about the video is that in it Henry tells Lucy that the Red Sox won the World Series but then says just kidding. Well in 2004 (the year this movie came out) the Red Sox actually did win it, ending an 86 year drought. There is also a cute moment where Lucy gives away the twist ending to The Sixth Sense.

The story keeps progressing nicely. Lucy begins keeping a journal, so that even though she begins each day unaware of the accident or the time that has passed since, she is now able to get up to speed more quickly. It is during this part of the story that Henry and Lucy share many “first” kisses in various romantic locations. This movie features many nice little date-friendly details like this. I found the final scene to be completely satisfying as it wraps up the story beautifully without giving it a cop-out Hollywood ending.

I’m on board with my brothers about Drew Barrymore’s performance, which is very appealing. She keeps the story from unraveling. She makes the somewhat unbelievable aspects of Lucy’s condition seem totally plausible. As for Sandler, as Eric mentioned he is best when playing the slightly below average guy. He is quite charming in this role (did I just write that about Adam Sandler?). They make a cute couple and share a nice chemistry.

Scott, 50 First Dates would have been better with less childish humor. I agree with you on that but I still enjoyed it quite a bit regardless. I was quite entertained by this original love story.