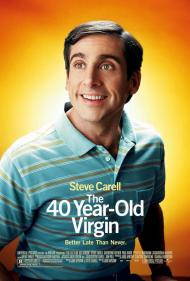 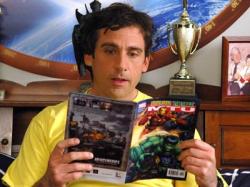 Steve Carrell has been the funny supporting guy in a number of Frat Pack movies, but with the release of The 40 Year-Old Virgin, he moves into the leading man position. There's no denying that he's a very funny guy with the potential to headline a good comedy. Sadly, this one just isn't that funny.

Most of the movie's attempts at humor come from an expectation that the audience will laugh at words like "pussy" or "bitch". Now, I'm not too proud to admit that in the right context those words can be used for comedic effect, but in this movie they and similar words are simply beaten to death. Not by being used in the humor, but by being the humor. And I can enjoy a good gross out movie as much as the next guy, but someone peeing themselves in the face is, in my book, going a step too far.

And it's not as if the central situation of the story doesn't open itself up to real humor. Carrell plays Andy, the titular 40 year-old virgin. An avid action figure collector and video game junkie, Andy's idea of a good time is watching Survivor with his elderly neighbors. Due to some really bad luck during his early attempts at having sex, Andy's pretty much given up on the idea. But when his male co-workers at the electronics store discover that he's still a virgin, they take it upon themselves to help him hook-up with the opposite sex.

The men in this movie could not be worse examples of the species than if a bitter college freshmen, just dumped by her boyfriend and now flirting with lesbianism, had written the script. And these are the guys Andy starts taking advice from on how to meet women.

Despite their attempts at helping him and a disaster at a singles bar, Andy manages to meet Trish (Keener), a woman he actually cares about, but to whom he is afraid to reveal that he's actually a virgin. It is with this relationship that the movie gains a little heart, but never enough to interfere with the "pussy" jokes.

Admittedly, there are some genuine laughs to be had in the movie's more surreal moments. The final musical moment of the movie, set to the tune of Hair's "Aquarius", is certainly funny. If the filmmakers had gone further out like this in more scenes it could have been better.

Despite my lack of enthusiasm for this movie, I still remain a fan of Carrell. I just hope that for his next outing he's able to raise the bar a notch or two. 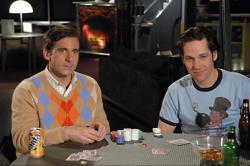 Steve Carrell and Paul Rudd in The 40 Year Old Virgin.

This film works great as a series of sketches. My favorite scene is when Andy is talking to a co-worker about what they did on their weekend. The co-worker says that he saw a woman having sex with a horse. Andy says that he tried to make an egg salad sandwich but decided not to.

As a feature length film this movie does not work quite as well. The only plot is that this guy will at one point in the movie lose his virginity. There are however, some laughs to be found on the way to that, ooh dare I write it, climax. 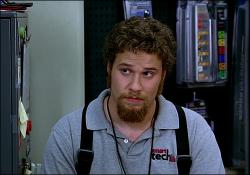 Both my brothers are too harsh on this movie. I really enjoyed it. Sure it has plenty of sophomoric humor and bathroom jokes, but fortunately it's good sophomoric humor and relatively funny bathroom jokes. What makes it really work though is the title character and the winning performance by Carell. After this and Little Miss Sunshine it is clear that he is one of the most talented comic actors working in movies today.

The most important thing about a comedy of course is that it be funny. Well this one is. There are many laugh-out-loud moments. Carell's disastrous drive home with the drunk woman behind the wheel had me cracking up. I disagree about this movie seeming like a series of sketches. It has a cohesiveness and a real story arc. It may be obvious where things are going but that doesn't take away from the fact that an actual plot and character development are happening.

No this isn't ever going to be a classic comedy but it is a funny movie that features a talented and creative cast, and more heart than you might expect.