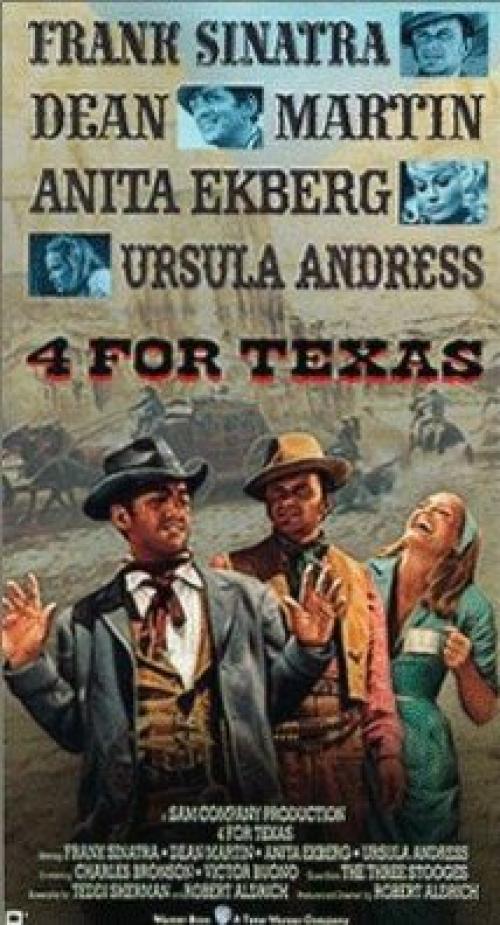 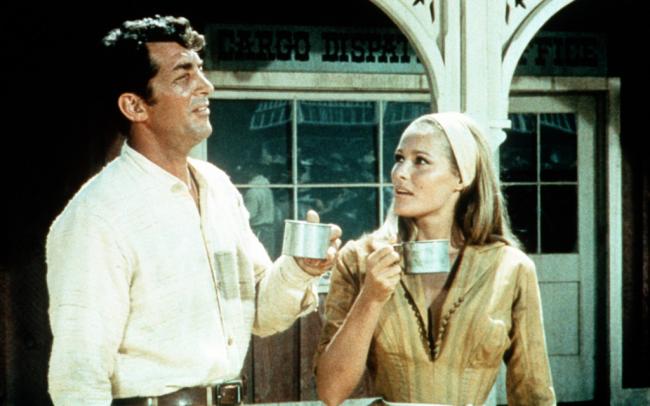 Dean Martin and Ursula Andress in 4 for Texas

Made during the Rat Pack fame, 4 for Texas is a western with plenty of shoot outs and fight scenes. Although it could have been played as an action drama, it tends to not take itself to seriously. Everything is mostly played light with the famous cast making for a great distraction. Frank Sinatra and Dean Martin seem to be having the time of their lives working together and canoodling with their co-stars.

The story takes place in Texas sometime in the 1800's. It begins with Zack Thomas (Sinatra) and Joe Jarrett (Martin) on a stage-coach, fighting off a gang of robbers who want the $100,000 being transported by a railroad official. Zack and Joe end up fighting over the money themselves. The rivalry continues back in Galveston, Texas where the gang follows them. The money eventually finances a riverboat casino where everything ends with a big fight.

A story goes that Anita Ekberg and Ursula Andress were given nude screen tests for their roles. As if we could only tell they were beautiful if they were naked. If that story is true, the film's producers certainly had a good scam going on. Neither Ekberg or Andress were noted for their acting but both could stop traffic. Ekberg's cleavage gets plenty of screen time and her bust profile is a wonder to behold. Andress, who was red hot from Dr, No (1962)  is a living breathing goddess here. She is dressed in clothes no women of the time, outside a brothel, would be caught in. In one scene she tries to seduce Martin wearing a sheer gown that is rendered invisible when she stands in front of a light.

The story is, for the most part secondary to the stars. Nearly every face on screen is familiar to movie buffs. Even the threestooges make an appearance. They play men delivering a nude painting of Andress to the riverboat. Martin even gets into their act, as does Ellen Corby, who played grandma Walton on the long running television show. As for the painting, you get to see it later in the movie.

Although it never gets at all tense or that exciting, 4 for Texas has some nice light moments and remains a fun watch for fans of the stars.