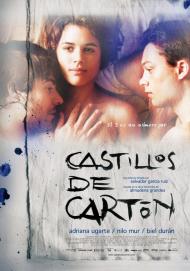 Jaime, Jose and Marcos in a three way.

3Some (Castillos de carton) is as it sounds. Three art students engage in a menage a trois. For a film with such an interesting set up, it is a bit slow, with too much drama. The sexual scenario is the film's one aspect to keep your interest.

Marcos and Jaime are college art students. They have a routine of getting women into bed. Early in the movie they invite a strikingly attractive fellow student, Jose, back to their apartment and smoke some weed with her. At a particular moment Jaime leaves the room. Marcos, who is the tall thin good looking of the two, then begins making out with Jose.  They start kissing and remove some clothes. As soon as Jose reaches for Marcos's penis, he stops her stating he is impotent. Jaime, the shorter, hairier friend, then enters and finishes the deed with the now horny girl.

They later explain to Jose that they have done this before. Jaime describes Marcos as, "a Greek god" when explaining his insecurity to Jose. He tells her that she would not have had sex with him if not for her attraction to Marcos. Jose has issues at home with her father, and turns to Jaime and Marcos, whom she starts to call her, "boyfriends." She falls in love with both of them as she continues to have sex with Jaime as Marcos watches.

Problems arise when Marcos's penis finally does as well. It is now Jaime's turn to watch as Marcos and Jose have sex in front of him. Jealously rears its ugly face as Jose starts to have sex with each man away from the others prying eyes.

The three lovers graduate from college and their relationship hits a fork in the road. Marcos, the most talented painter of the three, has the opportunity to do shows and perhaps find fame in the art world. Jaime, although a technically competent artist, will likely end up an art teacher. Jose loves them both, but how will it end?

That in itself is the movie's problem. I never cared. I have honestly never been in this type of a love triangle, but the logistics speak for themselves. They all get something out of this arrangement, but they are all fooling themselves if they thought it was a permanent thing. All three characters have fears and frustrations, but I never felt enough for any of them to get emotionally involved.

Art is a metaphor in the film. Jaime draws still life that is cold and without emotion. Marcos is the opposite. One particular painting of his emotionally moves Jose. That is all fine, but the graphic sex is what you will remember most. 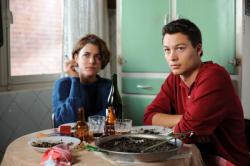 Apparently, IFC Films, the company who distributed this film in America, felt that the sex was all anyone was going to remember as well because they changed the original Spanish title, Castillos de carton (Cardboard Castles), to the more blatant, 3some. The original title is by far the better one, since it acknowledges the fleeting nature of the relationship.

I seem to have enjoyed this movie more than Eric and not just for the sex, which to be honest, isn't all that graphic, apart from one scene of Biel Duran openly fondling his penis. I rather liked the characters and I don't think they were so much fooling themselves into thinking it was permanent as they were just being young and not thinking beyond tomorrow. All of them are emotionally immature, but then they're young and carefree students at an Art College, what else would you expect them to be?

The film does have two large problems. One is that this is basically a short story stretched to feature length. The writer and director stretch the story with the sex scenes. It's not a complicated story and as Eric noted, the ending of the relationship is inevitable, so we know where it's going. It's not a long journey and even at just 90 minutes it requires filler. The other problem is the abrupt ending. Without giving things away, one of the characters makes an offer to the other two, but before either responds, the credits roll, leaving it up to the audience to decide what happened. It's a pointlessly ambiguous ending, especially when the novel the film is based on has a much more concrete ending. For those who wish to know, the novel is narrated by Jose many years after the events in the story. The story ends with the death of Marcos, who committed suicide after becoming a world famous artist. It is Jaime, whom Jose hasn't seen in years, who brings her the news.

We've seen this type of relationship in films before. Have you ever noticed that when it's purely a sexual fantasy type film, the three-way is always two girls and one guy, but when a writer wants to add drama to it they make it a devil's threesome (so called because there are 2 "horns" involved)? While this movie adds nothing particularly new to the genre, it's fairly entertaining anyway. Eric didn't care about the characters, but I liked them enough to want to see their relationship through right up until what was obviously going to be the end of it. This is in large part due to the likability of the young cast.

If graphic sex is all you're looking for and you're enticed by the film's silly English title then you are going to be disappointed. This movie is more than that.