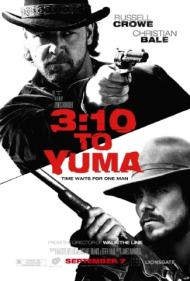 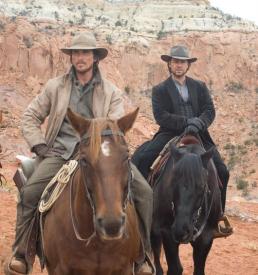 Christian Bale and Russell Crowe in 3:10 to Yuma.

Since westerns are a genre that are currently not very common, I was fairly excited to see 3:10 to Yuma. Throw in the fact that two of the toughest actors working today star in it and I was ready for some good old fashioned cowboy action. (No Brokeback Mountain joke intended, Patrick.)

Bale stars as a financially strapped rancher, Dan. He, his wife and two sons work a cattle ranch that is being threatened by the bank, his neighbor and the railroad. While rounding up his cattle, he and his two boys witness a stagecoach robbery. They end up meeting the leader of the gang, Ben, face-to-face. This starts a most peculiar relationship. Ben and his gang go to the local town and divide up the money. The gang heads out while Ben stays in town to get laid, with plans to meet up later.

Ben gets caught and Dan gets paid $200 to join a group of men that intend to take Ben to a town aptly named Contention so he may be put on the 3:10 train to Yuma prison. On the way, Ben slowly whittles his capturers down by killing them in different ways. Dan's oldest son, 14 year old William, follows them and ends up helping out.

The movie begins very well when we meet Dan and his wife Alice. He is a wounded Civil war veteran trying to earn a living on his ranch. Some idiots burn down his barn and the neighbor just damned the river that flows into his property. He is up to his eyeballs in debt. His oldest son has a chip on his shoulder while the younger one looks at him with hero worship. Bale conveys Dan's frustrations to the point that you would nearly excuse him for murder. He jumps at the chance to earn $200 with only the thought that it will save his family and not how dangerous it is.

The movie loses its way the last half hour. What starts as an engaging setup of two morally opposing characters turns into an action packed film of "what the *%&^ was that" scenes? The climactic ending has guns firing, people running and dying but all I was thinking was how none of this makes any sense. Ben has only a thousand and one chances to escape but he never does. At one point the good guys allow Ben's gang to find out where he is for no discernable reason other than maybe they are stupid. Even the direction slacks off. Early in the movie I noticed that great detail was taken in making the characters look authentic. Bale has yellowed teeth early on but they magically become white at the end.

3:10 to Yuma starts as a great movie, due mostly to Bales realistic performance, but it eventually dissolves into a mess of unbelievable action scenes. Endings like this may keep the Western film genre from being popular anytime soon. 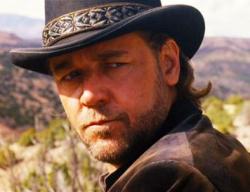 Personally, I think the movie is pretty consistently good all the way through. It's fast-paced with well-developed characters and some good action. I don't think it loses its way at all, not even in the last half-hour.

Both Bale and Crowe do a great job. Bale buries himself in his role as usual, but to my mind it's Crowe who steals the movie. He's oh so polite and oh so deadly. He's like a velvet garrote that will feel so good on your neck, you won't even notice that it's killing you until you're dead. I couldn't help but think that the posse in this movie could have saved itself a great deal of trouble if they had just gagged him for the trip to Yuma along with handcuffing him.

The only plot holes in the movie that bothered me was one, they never just killed Ben Wade (Crowe) and two, near the end of the movie, the marshal and Dan (Bale) have the drop on Ben's men and they never take a shot at them, instead they let them hire half the town to join them in stopping them from taking Ben to to the train. Their excuse for not killing Ben is that if they do, his men will come back and take their revenge. Well, their men are already taking their revenge so what's the big deal? At least then they could fight them in their home town and with warning that they're coming.

I've always been fairly ambivalent about Westerns. They're have been some classic ones and some creaky old horse operas that are best put down. 3:10 to Yuma falls somewhere in between, but in my estimation it's closer to a classic than a dud.

Ben Wade and Dan Evans are iconic characters. I’ve never seen the original 1957 version of 3:10 to Yuma but after watching this version I am curious to see how Glenn Ford and Van Heflin did as Ben and Dan, respectively. It’s a bit ironic that these two American archetypes are played here by an Ozzie and a Brit. Both Crowe and Bale prove they are not only two of the most intense actors working today but they can each pull off an American accent with ease.

Eric, I agree with you that some of the action near the end is exaggerated, but the relationship between Ben and Dan keeps the story grounded. The scene where Dan calls himself stubborn and they share a laugh together says a lot. In that moment they understand each other and realize that, somehow, they have become friends. And Ben tries like hell to get away. It is only after he has decided to allow Dan to get him to the train that he stops trying.

A grizzled Peter Fonda has a supporting role as a Pinkerton agent. He resembles his father more than ever. Although Henry Fonda was still starring in westerns with his name above the title when he was the age Peter is now.

I don’t always want a happy ending to my movies but this one ends a bit unfairly. Dan is killed but it is suggested that Ben escapes from the train. I would have liked to see Dan limping off into the sunset leaning on his son.