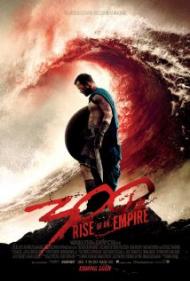 Rodrigo Santoro as Xerxes in 300: Rise of an Empire.

300: Rise of an Empire is the belated follow-up to 300. It isn't exactly a sequel though, as the events depicted in it occur before, during, and after the Battle of Thermopylae in 480 BC, which the first movie covered in gory detail. Like its predecessor it is a highly stylized, CGI heavy, gore fest, that features rivers of blood spurting in slow motion. Although I didn't see it in 3D, as I'm not a fan of the technology, I actually recommend seeing it that way. The special effects are the best thing it has going for it.

Rise of an Empire is the naval equivalent to 300. Instead of nearly naked Spartan soldiers with washboard abs and red capes fighting on land, we get nearly naked Athenian soldiers with washboard abs and blue capes fighting at sea. While the first 300 centered on just one legendary battle, Rise of an Empire is a bit broader in scope, featuring no less than three ancient battles. In flashbacks narrated by Sparta's Queen Gorgo, it shows how the Athenian General Themistocles killed Persia's King Darius with a single arrow at the Battle of Marathon ten years prior. The action covers two famous maritime battles as well, the Battle of Artemisium, and the Battle of Salamis.

We also get the back story of the movie's two villains, Xerxes and Artemisia. We see how Xerxes was transformed from a Persian Prince to a ten foot tall God King, by bathing in some mysterious gold substance. Artemisia was born Greek but after watching her family get brutally raped and killed at the hands of Greeks, who made her their sex slave before leaving her to die, she vowed revenge on any and all Greeks. She was found, mentored and trained by a Persian; due to her uncommon skill with a sword and her utterly ruthless nature, she rose through the ranks to become one of King Darius's most trusted commanding officers.

Of course all of this back story is just an excuse to feature several rousing naval battles that are CGI'd to the hilt. The entire movie was filmed on a green screen sound stage, and although most of the action takes place at sea there isn't a drop of actual H2O in sight anywhere in the movie.

The acting is decent, although Sullivan Stapleton seems to think he's doing Shakespeare, as does Rodrigo Santoro as Xerxes, both actors recite their stilted dialogue in much too serious tones of voice. Eva Green alone seems to be in on the inherent campiness of the entire production. She plays the psychotic Artemisia with an over-the-top glee.

The movie's most famous scene will undoubtedly be the one in which she brings Themistocles to her ship's quarters where they negotiate verbally while partaking in vigorous sexual intercourse. This sets up the best line in the entire movie. Later during the climactic sword fight between the two of them, Artemisia tells Themistocles, with a mixture of admiration and scorn in her voice, “You fight harder than you fuck.”

300: Rise of an Empire offers even less characterization than the first 300 did. At the same time it takes the level of outlandish action and overdone bloodshed one step further. In one scene Themistocles rides along the deck of a ship in the middle of a battle on horseback. The horse goes into the water and then up on the deck of another ship with Themistocles still in the saddle. And the fountains of spurting blood are so fetishistic that they eventually become bland and meaningless. Actually that goes for the entire movie. 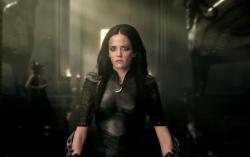 This is the worst sort of movie. It's not a good one, but it's not even bad enough to hate. Truly good or bad movies at least provoke an emotional response and give you something to talk about afterwards. It's been 3 days since I've seen this movie and I'm just now getting around to writing about it. The delay is in part because Patrick summed up my feelings about it as much as he did his, but also because there really just isn't that much to say about it. Honestly, it could be summed up thusly; looks pretty, otherwise fairly dull.

The only exception to the dull description is, as Patrick mentioned, Eva Green. While everyone else stands around flexing their abs and speaking in a monotone, she hams it up to perfection, creating a memorable screen villain in the process. Whenever she appears, the movie shows stirrings of life. Sadly though, her time is limited. One thing I should say in the filmmakers's favor is that her final battle isn't with Lena Headey's character, but with Sullivan Stapleton's. In most Hollywood films, whenever there's a female villain, there's a female hero to battle her, but here Eva Green goes toe-to-toe (and a whole lot else) with the male hero.

Like Patrick, I didn't see this in 3-D and I regret it. Apart from Eva Green, the only other thing going for this movie is the way it looks. I can only imagine how the splattering blood would have looked in 3-D, although, as Patrick wrote, by the film's end there has been so much of it that it has lost most of its impact.

If you enjoyed the original 300, then you'll probably find some things to enjoy here, but I can't say it left me hoping for another sequel. The only way I'd be up for that is if somehow they could bring Eva Green back, only this time make her the star.

Sullivan Stapleton in 300: Rise of an Empire

With its comic book violence and exaggerated battle scenes, this film is as shallow and superficial as can possibly be. This may in fact be what some people are looking for in their entertainment. Let me put it this way; if blood splatters, makeup enhanced abs, an aggressive anti-climactic sex scene and lots of CGI spectacle are your thing, 300: Rise of an Empire is for you. 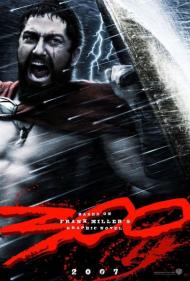