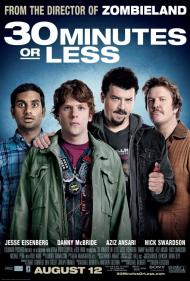 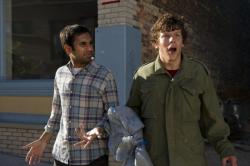 Aziz Ansari and Jesse Eisenberg in 30 Minutes or Less

30 Minutes or Less is a dark comedy based slightly on real events.  In 2003, Brian Wells, a pizza deliveryman from Erie, Pa. lost his life when two men coerced him into strapping a bomb to his chest and forcing him to rob a bank.  I remember watching this on television when Wells was outside yelling to the police, "Why isn't nobody trying to come get this thing off me?"  The bomb later exploded while he was still wearing it.

Steve Elzer, a senior vice president of Sony Pictures, responded to Wells' family's displeasure that this film seems based on Brian Wells, saying: "Neither the filmmakers nor the stars of '30 Minutes or Less' were aware of this crime prior to their involvement in the film," he said. "The writers were vaguely familiar with what had occurred and wrote an original screenplay that does not mirror the real-life tragedy."

The script they wrote is about two middle aged slacker idiots who kidnap a pizza delivery guy, strap a bomb to his chest, and inform him that he has mere hours to rob a bank or else they detonate the bomb he is wearing.  If he goes to the police they will blow him up because they will be keeping an eye on him.  Hmmm, sounds kinda familiar.

Eisenberg plays Nick, a pot smoking pizza delivery guy who seems to have absolutely no prospects in life.  His best friend and room mate, Chet, is a school teacher.  Nick is in love with his sister, Kate, who has a job opportunity in another state.  The movie never says why Nick is pretty much a loser while Chet went to college and has a real job.

The movie also tells the story of Dwayne, the son of a Michigan Lottery winner, who also does nothing all day but drugs and bitch about his dad to his best friend Travis.  He has a plan to open a whore house once his dad dies and he inherits his money.  To get the 100 grand to hire an assassin he puts his bomb plan into action.

30 Minutes or Less is a dark comedy in that people get hurt and die.  I did not laugh nearly as much as my teenage sons.  Perhaps I am getting too old for these types of movies but it flunks my first rule.  The lead characters are not all that likable.  Nick and his antagonist Dwayne, are not that different.  Both are shown contributing little if anything positive to the world around them.  Both have a friend who would likely be better off without them.  There some laughs to had here.   The bank robbery scene is one of the funniest, but not because of Eisenberg or the over rated Aziz Ansari.  The customers and employees reaction to the robbery make it work.

Jesse Eisenberg has one talent as an actor, nerd charm.  It worked for him in Zombieland and The Social Network, but here I never cared what happened to him.  Considering he has a bomb strapped to him most of the film, I probably should have.  An early scene has a throwaway Facebook joke.  You should never remind your audience that they once made a better movie.

Danny McBride has an even less acting repertoire.  He always plays variations of the same halfwit. He is one of those actors that looks familiar, because he is in lots of films, but has yet to become a household name. He speaks such impressive lines here as, "Sometimes fate pulls out its big ol' cock and slaps you right in face."

A dark comedy works best when a "normal" person is forced into a dark situation.  The script intends for that person to be Nick, but he does not even have the common sense to just go to the police and try to get them to diffuse the bomb.   How hard would it be to figure out who is following him?  Without much of a sympathetic lead the movie loses some of its humor.  Just as in real life, when investigators later determined that Brian Wells was in on the bomb plan, we lost sympathy for him. 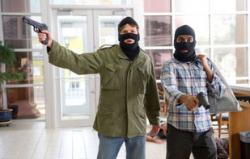 Jesse Eisenberg and Aziz Ansari in 30 Minutes or Less

2011 has been called the summer of the superhero movie, but it could just as easily be called the summer of the R-rated comedy. Already we've had Bridesmaids, Horrible Bosses, Friends with Benefits, Bad Teacher, The Change-Up and The Hangover Part II, whose successful predecessor was the R-rated comedy that most likely started this trend. 30 Minutes or Less is the latest entry in the genre. Interestingly, the biggest reason for the R rating on all these films is simply the use of profanity. When did we all agree that the word, "Fuck" was funny?

I can believe that the filmmakers hadn't been aware of the real life crime prior to their involvement with this film. I had never heard of the crime until I started reading about it when this movie came out. While there might be some very serious similarities between this movie and the real life crime, I'm not sure what the problem is. Name me a non-science fiction movie that doesn't resemble a real life event.

You're right Eric that the main characters aren't all that likable. Jesse Eisenberg can do a decent acting job, but he's not innately charming. Danny McBride's charm is equally lost on me. The supporting actors fare better. Eric, you didn't seem to like Aziz Asari, but I thought he was more sympathetic than Eisenberg.

The real scene-stealer in the film is Michael Pena as the Detroit hitman, Chango. It's a small part, but he makes the most of it. I particularly like the pep talk he gives himself in the mirror after he's been shot with the pen.

Apparently there was a quite a bit of improvisation in the film. "We were able to go off as much as we can," Nick Swardson said in NY Magazine's Vulture Blog. There's the line that made the trailer, Danny says, 'Remember when we worshiped the devil for two weeks?' and I say, 'Those were the best two weeks of my life.' And there's one line where I'm asked, 'What, are you gay for this guy? and I say, 'Well, if loving money is gay, I'm Elton John.' Danny and I just had a field day." Making up stuff on the day can produce some funny one-liners and there are some here, but a tighter, better thought out script is always better.

Eric you mention how Nick never goes to the police, but my first thought was, why didn't he at least call the police? He could have told them the situation over the phone and they could have met him somewhere. I know that would have made for an even shorter movie, but it's a pretty big plot hole to avoid.

I did laugh at some things. It's actually better than the word of mouth I've been hearing about it. It's definitely going to appeal more to people who titter at vulgar language though, but at just an hour and 20 minutes, it's fast paced and amusing enough to mostly hold your interest.