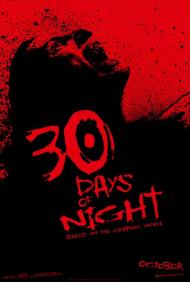 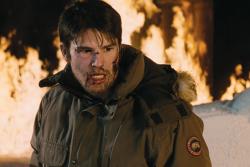 Josh Hartnett in 30 Days of Night.

30 Days of Night is a vampire movie based on a graphic novel. The entire film takes place in a snow bound darkened setting. With a lack of so much color the movie is practically black and white.

Hartnett stars as a, recently separated from his wife, sheriff of Barrow Alaska, the northern most U.S. city. Every year they have 30 days without any daylight. Three fourths of the town's population head south for the month while the remaining folks stick around to be vampire food.

As the movie opens a stranger in town has stolen and destroyed everyone's cell phones. He has also killed every dog. By the time the power goes out you know it is too late. As the stranger says, "That cold ain't the weather. That's death approaching."

At first the vampires are rarely seen. They are simply shadows that pull people under buildings and into dark corners. Eventually we see that they are foreign language speaking, bloodthirsty humanoids in the traditional vampire sense. Although all of these vampires have blood stained chins as none of them appear to have any table manners.

Hartnett and a select group of townsfolk make like Jews during the Holocaust and hide out in an attic. His wife is among them and they of course make up. I guess there is nothing like the threat of being eaten alive to rekindle a love affair.

The movie has as much blood in it as any I have ever scene. One great aerial shot of the town being overrun by the vampires was reminiscent of the aerial shot from The Longest Day when soldiers are running through a French town fighting the Nazis. The ending is a bit over-the-top, but then again, this is a horror film. 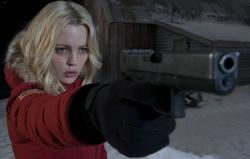 Melissa George in 30 Days of Night.

As far as B-movie schlock goes, this one isn't so bad. There are definitely some creepy moments of suspense here, but overall, it's less than satisfying.

The look of this movie, as Eric said, is good. And so is the atmosphere. The beginning of the movie does a good job of setting up a feeling of cold isolation. The first half of the movie is definitely the best, as the vampires close in on the town and slowly cut it off from the outside world.

When the initial attack is over though and there are just a few people left in the town, the movie isn't as strong. The vampires can smell blood, it's not that big of a town, and yet they can't find any of the survivors? They're smart enough to hatch this plan, but they're not smart enough to conduct a house-to-house search?

And at the end of the movie, they burn down the town to hide the evidence. Why didn't they do this earlier? They could have burned the survivors out by burning one house at a time.

I also wanted to know more about the vampires. They appear to be Russian, having crossed the Bering Straits in a ship (apparently), but what exactly are their origins and what do they live on when they're not decimating isolated Alaskan towns?

Not a bad movie to watch on DVD, but not a great one either. 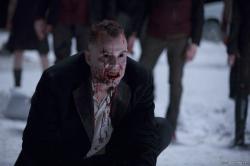 Danny Huston in 30 Days of Night.

Steve Niles initially wrote 30 Days of Night as a screenplay. It was only after suffering rejections by several studios that he created the comic book version which, ironically, was put into production by one of the studios that had already passed on the script. A fine example of perseverance paying off that also seems to prove the old adage that a picture is worth a thousand words. The result is a decent vampire flick with plenty of bloody action. I didn't find it all that suspenseful though and it lacks any memorable jump-out-of-your-seat moments.

These vampires speak a made up language chosen to demonstrate how they communicate, without making them sound too human. In fact they are quite animal like. Their primal savagery makes them seem fairly unintelligent. Given their behavior, which seems more instinctive than consciously thought out, it seems unlikely that they could have concocted and executed such an elaborate plan as the one they use to isolate the town.

The fact that they take their time hunting down the survivors didn't bother me. I just assumed they were extending their fun, secure in the knowledge that they had a 30 day window of time and that the remaining humans had nowhere to go. Although the script could have addressed this issue, which would have also accounted for the seeming incongruity in their intellectual capacity.

I do agree that the first half of the movie is the better half. What little suspense there is comes in the first 30 minutes or so. Once we see the vampires the mystery evaporates. The human characters are all a bit interchangeable and I never became emotionally invested in any of them enough to care much about just who would live to see the dawn on that 31st morning.

Like Eric, I thought the ending was a bit ridiculous but it does at least fit the mood of the story. The bleak wintry landscape makes a nice setting and allows for some vivid contrast of colors with the red blood standing out starkly against the whiteness of the snow. This is especially noticeable in the overhead shot Eric mentioned, which is easily the high point of the entire movie. At best, 30 Days of Night is solidly mediocre.