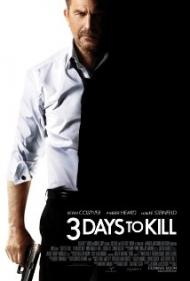 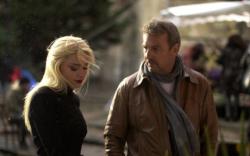 Amber Heard and Kevin Costner in 3 Days to Kill.

Co-written by Luc Besson, the premise to 3 Days to Kill sounds awfully familiar. An aging covert agent must fight and kill in Paris while dealing with his daughter. All it needs is Liam Neeson in the starring role, and it would seem to be a remake of Taken. To be fair, many of the details vary greatly from that earlier film, but it's easy to see that the idea sprang from the same mind. However, where Taken managed to find a good balance between over-the-top action and family drama, 3 Days to Kill never finds the right tone. It wants to be an action movie, a comedy, and a poignant drama at times. It is only thanks to the central performance by Kevin Costner that it manages to entertain at all.

Costner plays Ethan Renner, a CIA assassin. When he discovers, after collapsing in the middle of a mission, that he has cancer, he decides to reconnect with his daughter and ex-wife in Paris. Just as he starts to warm up to his old family, his job catches up with him when CIA officer Vivi (Amber Heard) shows up to enlist his help in killing an old enemy. In exchange, she offers him an experimental drug that may just cure his cancer. Can he finish the job without dying and losing his daughter in the process?

The movie succeeds best as a lighthearted action film. At 59 years of age, Costner still has charm on his side. He might be a little out of shape (something that no amount of scarves can hide), but he still makes a believable action star. He's helped in this by the fact that he seems a little more human than the indestructible Neeson did in Taken. When he chases one of the bad guys at the beginning of the film, he becomes winded and has to rest. However, he's still quite capable of driving fast and getting in fistfights and shootouts.

It's when the movie strays into family drama that it suffers most. The script is cliched and the dialogue groan inducing, despite a game effort by Oscar nominee Haliee Steinfeld as Ethan's daughter Zoey. The worst of these family moments comes when Ethan and Zoey are discussing her inability to ride a bicycle. "What kind of girl doesn't know how to ride a bike?" he asks. To which she replies, fighting back tears as the music swells, "The kind of girl who never had a father to teach her to ride!" Another moment of unintentional humor comes later when Ethan rescues his daughter from a nightclub, sweeping her up in his arms in a scene that will remind you of Costner's The Bodyguard. If only the filmmakers had played Whitney Houston's "I will Always Love You", the moment would have been perfect.

The other star of the film is Amber Heard. She plays a sexy agent who appears demure and professional in her first scene, but who changes her clothes and hair color in almost every subsequent scene, becoming sexier and stranger each time. It's as if she's appearing in another movie completely. Her surreal, espionage world seems to have no connection at all with Ethan's attempts at family life.

Taken turned out to be a surprise hit for both Neeson and Besson, reviving both their careers to a certain extent. I doubt this one will make anything close to the same amount that earlier film took in internationally. However, it, along with the recent Jack Ryan: Shadow Recruit, proves that Costner still has plenty of gas left in his tank of charisma. He just needs better material in which to demonstrate it. 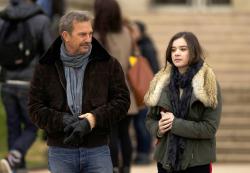 Kevin Costner and Hailee Steinfeld in 3 Days to Kill

Costner is certainly aging well. At 59 he is very much still relevant as an action star. Let me put it this way, the ageless Cary Grant played a spy in 1963’s Charade at the age of 59. Like Grant in 1963, Costner may not be in the best physical shape of his life but his charm still is.

The idea of a secret agent having real life problems has become somewhat of a common plot device. Besson has been a huge influence on this trend. Ethan is not well physically or emotionally. He wants desperately to connect with his daughter whom he has not seen in 5 years. Their relationship is sweet as it humanizes Ethan and provides some of the film's best humor.

Often, just before he is about to kill or torture someone, Zoey will call him on his cell, such as when he captured an Italian he intends to interrogate and Zoey calls asking for a spaghetti recipe. When Ethan meets Zoey’s soccer playing boyfriend, Ethan informs him that he likes football. The French teen responds, “American football.” Ethan corrects him, “Real football.”

The action scenes sometimes stumble a bit when Ethan's personal issues intervene. Why does he not turn his phone off when he is about to “work”? More than once, his illness just happens to come on during a dangerous moment. Enough action scenes worked though, to overlook most of the film’s flaws. The scene in the elevator, when Ethan meets Zoey’s boyfriend’s parents is particularly stressful as his personal and professional life collides. It leads to the movie's very satisfying climax.

Although he could have continued to work for another decade, Cary Grant would only make two more films after Charade. Costner proves here that he has the ability, and screen presence, to make many more films. I certainly hope he does.

Kevin Costner in 3 Days to Kill.

Scott's right, the problem with this movie is it never finds the right tone. One minute it's a stylish, ultra-violent espionage/comedy with Kevin Costner playing parent over the phone while he's torturing and interrogating people. Eric brought up the spaghetti sauce recipe scene, but there are several others, including one where his daughter's teacher calls him to set up a conference. He assures her he will be right over (just as soon as he's finished maiming and/or killing bad guys). On a side note, I found it interesting that this movie takes it for granted, without passing judgment, that the CIA routinely tortures suspects.

The next minute, though, 3 Days to Kill is trying to be a heartfelt family drama. There's the incredibly sappy scene Scott mentioned, where Ethan teaches his high school age daughter to ride a bike. There are also a few half-baked attempts at reconciliation between Ethan and his ex-wife played by Connie Nielsen, and we are constantly being reminded of the fact that Ethan has only a few days left to live. But when the script treats human life so cheaply, how is the audience supposed to care about the fate of this one man?

And then there are the scenes with Amber Heard. Besson should have written a separate screenplay for her since it seems, again agreeing with Scott, like she's in her own movie anyway. Viva Delay is a cool, sexy, dangerous character but she is underused and detracts from the central story of the film. Or else she needed to be incorporated into the family dynamic somehow and they should have ditched the whole estranged father/daughter bit and gone all the way as an ironic family spy romp with a violent edge.

The action scenes are mostly good. Ethan is a tough old sonofabitch. Although his heroics are a bit much at times. He is able to defeat every bad guy he faces, no matter how many. He does get beaten up quite a bit but the happy ending is never in doubt. And Eric's right, they do over-use the device of him getting hit by one of his dizzy spells in the middle of almost every fight. This is another reason why the family drama angle should have been dropped. This isn't the real world at all so why bother to pretend it is?

Costner still has it as a movie star and an action hero. He retains his charisma despite the double-chin and crow's feet (see photo). But a solid central performance isn't enough to save this script. 3 Days to Kill should have been a purely entertaining action/comedy. Unfortunately it was saddled with a bit too much hackneyed melodrama.