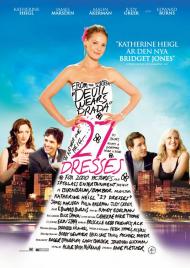 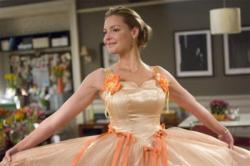 27 Dresses takes the old adage, "Always a bridesmaid, never a bride" to extremes. However, the comedy gets lost among all of the extra characters.

Heigl plays that typical Hollywood single girl in the city. You know the type. The one that is gorgeous and sweet beyond belief, yet has an incredibly hard time finding love. She is secretly in love with her boss but her boss has the hots for her sister. Marsden shows up as a reporter and unbeknownst to her, begins writing an article about her for his newspaper.

Harry and Sally each had a single best friend that they confided in as they fell in love. Heigl has her sister, her boss, her best friend, her father, and the man she eventually falls in love with to talk to. That is way too many characters taking up way too much screen time. Although to be fair, Heigl has a really good scene where she finally lets her sister have it, "That was yesterday. Today you're just the bitch who broke my heart and cut up my mother's wedding dress."

Heigl and Marsden are the saving grace in this film. They each exude charm and wit. They have the best lines. "Oh Yeah. I am a real good caulker." Heigle sarcastically says to Marsden who notes out loud, "Likes caulk." (say it out loud) In another scene Marsden asks her, "What about you? You don't have any needs?" to which Heigl responds, "No. I am Jesus." The best scene in the movie is when they get drunk in a bar. They end up singing, with the entire place doing back up.

If only the movie could have kept the camera on Marsden and Heigl together, could this movie have been any better. As a guy watching a love story I always note the lack of character in the male lead. Marsden simply plays the handsome stranger who only has a couple of lines that reveal any depth. His part should have been expanded on. Heigl is in nearly every scene and thus this love story ends up being completely unbalanced. 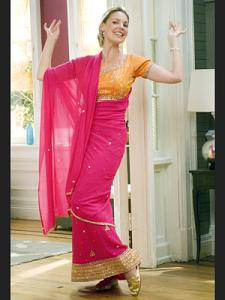 Any movie featuring a "fashion show" by one of its characters, needs to be banned from cinemas.

This movie breaks two of my movie rules. No movie (unless it's a musical) should have its characters burst into spontaneous song (and it's even worse if suddenly complete strangers join in). And no movie should ever have a fashion show where one of the characters tries on a string of outfits in a montage. Both of those things happen in this movie.

What I really didn't like about this movie is that I didn't really like anyone in it. Heigl's Jane is a doormat who only has herself to blame for her problems. Her sister dates the guy she has a crush on and then walks all over her, but Jane is the one who lets her by never standing up for herself and speaking her mind. Her boss walks all over her. The guy she ends up with writes an exploitive article about her. All of her friends force her into ugly bridesmaids outfits. She's a complete and utter wimp who doesn't have balls to say no to anyone and is therefore miserable. Big surprise! Sure, sure, at the end of the movie she finally speaks up for herself, but only after her life has been put through the wringer.

As for Marsden, he barely gets any character at all. The depth of his character? He was screwed over by love once and now he's a cynic. That's certainly original enough. Didn't see that coming!

And as far as their falling in love goes, they show no great chemistry together. Their big love scene only happens when they're both drunk. This is another case of a movie saying two people are in love instead of showing us two people in love.

There may be a lot of characters in this movie, but there's very little character development.

I agree with Eric that Heigl and Marsden are good together. In fact the entire cast is quite good but they cannot overcome the clichéd plot and utter predictability of this chick flick. From the beginning when Jane is juggling two weddings on the same night to the scene on the beach where all 27 brides from the weddings Jane has been a bridesmaid for show up in the titular dresses, there isn't a moment of originality to be found. However, if you don't mind how derivative it is and are fairly easily amused then 27 Dresses has plenty to offer.

Both of my brothers are right about Jane. She is too beautiful to believably play the woe-is-me bridesmaid character and she is way too much of a doormat to earn our sympathy. When she does finally stand up for herself it comes too little and way too late. The scene where she reveals her sister's true character during the slide show is just plain cruel. It made me sympathize with her sister.

Marsden has the thankless role of the bland male love interest. He's there to serve one purpose only, which is to be the perfect man for the female lead. I always find it amusing however, that my brothers often point out the lack of character depth in male roles in chick flicks but they never seem to complain about the reverse. I mean let's take a look at roles for women in most male oriented action movies. There's not exactly a lot of character development going on there either. Tit for tat I say.

Like Eric I enjoyed Heigl's and Marsden's interaction, even the "Bennie and the Jets" singalong at the bar. Yes it has become a romantic comedy trope, as has the fashion montage scene Scott mentioned, but if done well I don't mind either of them. 27 Dresses is your run of the mill chick flick with a game cast and a totally predictable plot.