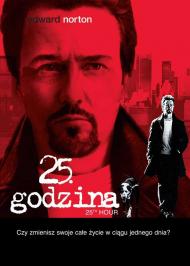 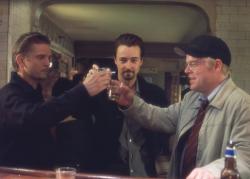 Too often Spike Lee's films have been bogged down by one theme, race.   His last completed theatrical film, Miracle at St Anna was a complete mess.  When it was not bashing you over the head with its message of bigotry, it was confusing you in its inexplicable story line and poor editing.  For me, his best films are the ones in which racial issues are non-existent or at least pushed into the background, such as Inside Man and 25th Hour.

Based on David Benioff's novel, 25th Hour tells the story of a man, Monty, spending his last day of freedom before serving seven years in prison for dealing drugs.   He visits his father and goes to a club with his two long time friends and his girlfriend.  The film contains flashbacks and plenty of dialogue as we get to know Monty and his friends.

The entire plot is driven by conversations and this movie has some great lines.  One of my favorites is when Monty's friend Jacob, a teacher, has the hots for one of his students and Frank asks him, "You know what a man should never ask in a Victoria's Secret shop, Jake?... Does this come in children's sizes?"   The "Fuck you!" speech is the greatest soliloquy of any film.  Even if you are too pious to agree with any of it, you have to at least admire the boldness of it.

This is not at all a film about what would you do if you had just one day left.  Monty’s impending date with prison reveals that all of the important  people around him have some blood on their hands as well.  His girlfriend knew he was dealing drugs and financially benefited from it, as did his dad.  His friend Frank is a trader and risks large amounts of other people's money.  Jacob is hot for a student.  No one is without sin, yet it is only Monty who has been sentenced for his crime.

The use of color by Lee is interesting.  An interrogation scene takes place in an all white room with glaring bright light.  As a friend pointed out to me, it is as if he, "is metaphorically under the white, hot lamp."  In another scene Monty and friends arrive at a night club.   Standing near the door they all appear to be shades of blue, as everyone behind them, still waiting to get in, are normal colored.

The entire story has ground zero as a backdrop.  9/11 is mentioned several times, and in one scene two characters talk about the reality of their future relationship with Monty, while ground zero is clearly in the background.   Like the days following 9/11 no one knew what to expect.  Like Monty going to prison we all assumed the worst.

Anger and fear permeate the film, and is its overall theme.  Monty is pissed that someone close to him has betrayed him and he's scared of what may happen to him in prison.  The ending is not completely satisfying as we are presented with a possible ending that would have made for a happy ending, but would not have rang true.

At over two hours it could have been trimmed.  Too often the story wanders a bit by giving supporting characters more screen time than they need.  This is Monty's narrative, and the movie loses its way when it strays from him.  Although slightly bloated, 25th Hour is thought provoking and one of Spike Lee's best films. 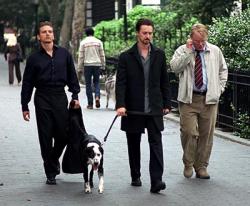 25th Hour just might be Spike Lee's best movie. It is a brilliant depiction of one man's last day and night of freedom before serving a prison term. It features a great script by David Benioff based on his novel. With Ground Zero as a backdrop it perfectly captures New York City the year after 9/11. The entire future of the city felt fragile, uncertain and in some ways bleak, just as Monty's future in prison seems to him. The characters portrayed in this movie are all fully fleshed out and undeniably real and the cast all give assured and finely nuanced performances.

The “Fuck You” speech is a classic moment. Monty Brogan (or is it Monty Broken?) lashes out at the many different New York City stereotypes while staring at himself in a bathroom mirror that has the words “fuck you” written on it. His anger is really directed at himself. He is now in a situation completely of his own making that he cannot escape.

This monologue is a very Spike Lee moment, like his trademark camera technique of having a character appear to glide along without walking. This is used to great effect in another memorable scene. The one where an inebriated Jacob gives in momentarily to his desires and kisses his 17 year old student. He immediately feels regret and must disassociate himself from his guilty actions, which Lee demonstrates by having Jacob appear to glide away from the incident.

25th Hour is beautifully shot, recorded and edited. It is filled with symbolism. Monty is named after Montgomery Clift. His mother's favorite movie was A Place in the Sun, a movie about a young man who plans a murder in order to achieve his place in the American dream much like Monty sells drugs to do. Monty has a poster of Cool Hand Luke on his apartment wall, foreshadowing his prison sentence. Eric mentioned the symbolic use of color throughout the movie as well.

Still no amount of stylish camera work or profound symbolism can make a movie great without a compelling storyline and intriguing characters. Monty, Jacob and Frank are all superbly brought to life. Any one of them could be the protagonist of their own movie. As a trio they share a completely believable friendship. We can easily picture them growing up together. As adults, facing the prison sentence of one of them, you get the feeling their lives are going in different directions and will be irreversibly separate from now on.

Another great scene in 25th Hour is one Eric also mentioned. It takes place in Frank's apartment overlooking Ground Zero. Frank and Jacob honestly discuss the fact that their friendship with Monty is over. Yes, Monty may survive 7 years behind bars but he won't be the same person when he gets out, and frankly, neither will they. They confide things to each other that they cannot say in front of Monty such as Frank's admission that he feels Monty deserves to be locked up.

The morning-after beating scene is yet another unforgettable moment in a movie filled with them. Its violence is so real. It is the closest Monty can come to admitting just how terrified he is at the thought of being gang raped in prison. He has such primal fear that he begs his friend to beat the shit out of him to mar his clean cut looks. Norton, Hoffman and Pepper all cap off excellent performances with this scene.

25th Hour deserves more acclaim than it received. It features a terrific script, an incredibly talented cast firing on all cylinders and a director at the peak of his powers. I place it in the top 10 best movies thus far in this millennium.