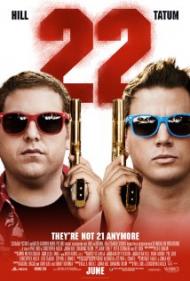 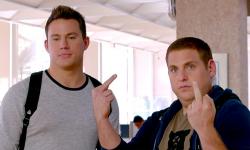 I thoroughly enjoyed and laughed throughout 21 Jump Street and did the same with this sequel. The “in the know” jokes and self-references are often the highlight. Just as the audience is thinking something about the film, the film itself brings it up. The film makers understand their audience, and take full advantage of them.

When Schmidt and Jenko are told they have to investigate a new drug being used by students, the direction they are given is to do what they did the first time around. That and many other lines are winks to an audience that knows that sequels are known for being less than their original. When Jonah Hill sees Ice Cube's square clear walled office, he remarks that it looks just like a big ice cube. I never said they were subtle.

Jenko and Schmidt are now under cover as college students, telling everyone that they are 19 years old. In real life both Channing Tatum and Hill are north of 30 and look it. They could have said that they had both served in the military after high school to excuse their ages, but what fun would that be. Some of the funniest jokes are when someone makes fun of them obviously being older than 19. Jillian Bell rags on Jonah Hill about his age to no end and the fight she and Hill get into is one of the funniest I have seen in years.

My brothers and I have slammed Tatum’s acting many times over the years but I cannot do so here. This is one of his finer performances as the mentally challenged Jenko. Tatum is completely natural when playing a moron. One of his best moments is early on when he tries, and fails miserably, to have a Mexican accent. Tatum should stick with comedies.

In the first film, Schmidt surprisingly became popular, while here it is Jenko who finds himself on the college football team and pledging a fraternity. He makes best friends with a fellow jock named Zook of all things, who may or may not be the drug dealer they are investigating. Jenko and his new bud are like two men sharing the same brain, while Schmidt is Jenko’s complete opposite. Jenko and Zook's friendship causes Schmidt to be jealous and his friendship with Jenko becomes strained. Eventually Jenko and Schmidt find themselves in couple’s therapy as if they were gay and on the verge of breaking up.

I enjoyed this movie from start to finish and by finish I mean, stay through the credits for more jokes and cameo appearances. They make fun of all the possible sequels they could film and I hope they make every one of them. Joke for joke, 22 Jump Street is, so far, the funniest comedy of the year. 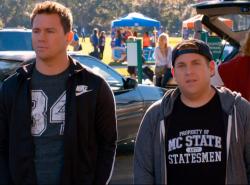 Clearly my brother is easily amused. Yes, there are some funny moments in this movie, but it is nowhere near a 3.5 star movie. And sadly, as is so often the case these days, some of the best jokes were given away in the trailers, including the one Eric mentioned, where Tatum attempts a Mexican accent.

The best jokes are those where the film makes fun of itself. Sequels are almost always inferior and the script acknowledges that fact. The police captain keeps admonishing Schmidt and Jenko to "just do what you did last time." And, also as Eric mentioned, the credits contain one of the film's funniest sequences when it projects all the possible sequels.

Although this is almost exclusively the Hill and Tatum show, two supporting players manage to make their presence felt. Ice Cube's anger when he discovers that Schmidt has slept with his daughter is worth a few a laughs. The real scene stealer though, is Jillian Bell as Mercedes. Her sarcastic delivery and constant insults to Schmidt about how old he looks as well as her fist fight with him that contains some of the most awkward sexual chemistry ever put on film, are two of the film's stand-out elements.

Certainly Hill and Tatum share a comfortable chemistry with each other. They are relaxed and confident and it's easy to believe they are some kind of bizarre combination of best friends, brothers, and life partners. This is best demonstrated during their therapy session.

The film's biggest problem is that too often it goes for the cheap and obvious laugh. Like its predecessor, it finds any mention of male genitalia and especially any hint of homosexuality to be hilarious. It also has a habit of repeating jokes until they've lost their potency. Even the sequels are always repetitive references, which start off funny, but are beaten into the ground by the climax.

If, like my brother, you loved the first film, you will undoubtedly enjoy this one. As they keep saying, people are expecting more of the same and that's exactly what they provide.

Sometimes more of the same can be a good thing and to be honest I was fairly entertained by this second installment in the Jump Street franchise. In my review for 21 Jump Street I wrote that I could easily foresee Jenko and Schmidt becoming the signature roles for Channing Tatum and Jonah Hill. After seeing 22 Jump Street I think it's a done deal. These are the roles they were each born to play. Like all the great comedy teams of the past they have terrific natural chemistry and great comic timing together. Jenko and Schmidt can each carry a scene without the other but they are much better as a duo than when going it alone.

Channing Tatum is a gorgeous hunk of man meat with a boyishly handsome face. He plays Jenko, a man so stupid he mistakes "Cate Blanchett" for "carte blanche". My brother Eric and I disagreed over Channing's performance in the first movie. I gave Tatum credit for putting on a dumb face while my brother thought it was his normal expression. I will concede the fact that I've never exactly seen a look of deep contemplation on his face before but I still think he puts on a show of looking dumber than normal as Jenko. The scene where he tries to do a Mexican accent is the best example of this. It's a scene that on paper isn't funny at all but together these two make it funny.

Eric mentioned the lack of subtlety in many of the meta-references, like the Ice Cube office remark. Here's another one. Later in the movie Queen Latifah, playing Ice Cube's wife, gets in on the act. She tells someone she meets that she's, “Straight outa Compton”, which was, of course, the title of the 1988 album that made Ice Cube, and the other members of N.W.A., famous. When did the mere referencing of something from popular culture become in and of itself funny?

As for Ice Cube himself, I agree with Scott that he has a few funny moments as Captain Dickson. I laughed when he corrected Schmidt on the Jesus in their new “church” headquarters. “That's Vietnamese Jesus now. See this is a Vietnamese church, you racist sacrilegious sack of shit!” But his violent reaction at the restaurant was over done. Jillian Bell is hilarious as Mercedes. She's one of the freshest new villains on the scene in years. Her transformation from being just a very odd roommate into a bad-ass drug dealer is perfection. I've a feeling we haven't seen the last of her.

Another thing I cracked up at was the name of the Mexican restaurant they go to while on Spring Break. The sign reads, “Gringo Pendejos”, which basically means “Dumbass Americans”. With 22 Jump Street you know exactly what you're getting for your money. It's pure comic fantasy (like Jonah Hill could ever pull down Amber Stevens!) but it features a great central duo who exhibit such an infectious goofiness together that, in spite of my brain telling me otherwise, I was quite amused. 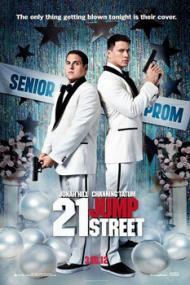