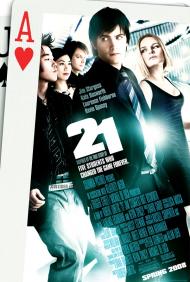 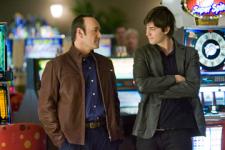 21 is one of the most predictable movies I have ever seen. You can see where it's going within the first five minutes. It's even supposed to have a twist ending, but the twist itself is so obvious that it broadcasts itself almost immediately. This predictability wouldn't be so bad (I mean we all knew the Titanic was going to sink) if the story was more interesting or the characters more likable, but it isn't and they aren't.

The plot, which is supposedly based upon true events, revolves around a mathematical genius named Ben, who comes to the attention of one of his professors at MIT (played by the always good Kevin Spacey). This professor tells Ben about a group of students he travels to Las Vegas with on weekends where they use their memory and math skills to count cards at Black Jack. Ben at first balks at the idea, but soon realizes that this could be his only chance at earning enough money to pay for Harvard which is where he wants to go for his post graduate work.

Okay, so you've got a young guy who grew up poor who suddenly finds himself flush with money and glamor. If you guessed that he would get cocky, you guessed correctly. And that's where things start to go wrong for him and it leads to an ending where Spacey's Professor behaves in an unbelievable, but predictable way.

The fact that I could guess how the movie was going to end might not have hurt the story so much if it had been shorter. This movie, with very little substance to it, is stretched out to a full two hours. If they could have chopped off 30 minutes or so and kept it lighter, it would have been a much better movie.

Apart from Spacey, the movie also features Laurence Fishburne as a casino security specialist and Kate Bosworth as the generic girlfriend. Neither add much to the movie, although Fishburne brings a little bit of life to the story, just not enough to resuscitate it fully.

This is one of those movies that I can't even say I hated. I didn't enjoy it, but neither did it evoke enough emotion from me that it felt like it was worth the energy to actually hate. It just kind of is and what it is, is kind of dull.

Kevin Spacey out shines everyone else in 21

Yes, this is a generic story in which we can see pretty much exactly where everything is going. It is storytelling 101 except that I was never too invested in the lead character's desire to attend Harvard. I have a son currently trying to figure out how to pay for a ridiculously overpriced university education. Seriously, can anyone explain why it costs so outrageously much? Anyway, you would think that I would easily be on this kid’s side, rooting him along as I understand his struggle to pay an unjustifiable bill.

Ben is going to MIT. His future is bright whether he gets into Harvard or not. “I had a 1590 on my SAT, I got a 44 on my MCAT, and I have a 4.0 GPA from MIT.” The only thing that threatens him is his own actions in Las Vegas. Other than his desire to attend Harvard and screw Jill, he is given very little personality. He is pretty much just a working class dull nerd who, as Scot wrote, predictably becomes a cocky jerk when the money starts rolling in. As Miles tells him, “You got emotional and you got stupid.” Gee, do you think he may get in over his head?

The second half of the film picks up after Ben gets betrayed and plots revenge. Now the movie finally has an interesting plot line. Sure, we still know where the movie is going but not exactly how it will get there. For the first time there is some real tension and I enjoyed the twist.

Agreeing with Scott, Kevin Spacey is the best thing about this film. He can add so much to every line he delivers. “The only thing worse than a loser is someone who won't admit he played badly.” “This isn't about me... you little infant!” “What do you want Ben? This is an alumni dinner. You need a diploma to attend.”

I enjoyed 21 more than my brother but it is not one that I am eager to watch again anytime soon.