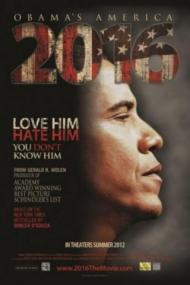 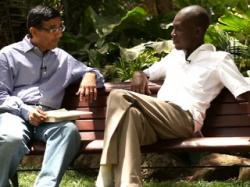 2016: Obama's America will not convert Obama's followers to think otherwise of him.  It will not inform the already converted with any new information on Obama.  What it does is to try to explain Obama's motives for much of his actions.  Conservative author and commentator Dinesh D'Souza traveled around the world interviewing people who knew Obama and his father.

The entire premise of the film is that Obama has daddy issues.  He uses Obama's own words and voice from his audio book "Dreams From My Father," to prove his point.  Although he makes a very convincing argument, it remains conjecture.  Dinesh D'Souza's point is that because his father was such an anti-colonialist, so is Obama.

D'Souza brings out all of the usual suspects from Obama's past.  There is Obama's high school mentor, Frank the card carrying communist whom Obama mentions 22 times in his book.  There is the domestic terrorist Bill Ayers who worked with Obama and raised money for his campaign.  We even get to see Obama's minister Jeremiah Wright do his now infamous "God Damn America" speech.  He even interviews people who knew Obama's father, painting him as a socialist as well.

The point he is trying to make is that Obama is an anti-colonialist and as such is anti-America as a super power.  Examples Dinesh D'Souza gives is that Obama supports South America off shore oil drilling but not in The United States.   He supports the Falkland Islands independence from Great Britain.  D'Souza also brings up the Health Care Bill and the national debt. blah blah blah.

Dinesh D'Souza interviewed many people here but the most talked about is that of conservative Shelby Steele, who is, like Obama, a child of a mixed-race marriage.  He states what most of the country has already discussed in private, that many white Americans voted for Obama to prove to the world, if not themselves, that they are not racist.  He explains that unlike Al Sharpton and Jesse Jackson, who also ran for President, Obama presents himself as a "...non-angry black man."  Steele also states that no unknown white senator with only two years experience could walk so easily into the White house.

D'Souza paints a picture of Obama as a man with insecurities stemming from his father's absence.   He presents Obama as a man who learned early on in life how to get along with people and to accept help when offered.  He again uses Obama's own words to example this.

By the end of the film, I did feel that I better understood who Obama is and I like-or at least pity-him more now,  than I ever did before.  He is an American but is spiritually a man without a country.  He was profoundly affected by his trips to Kenya and dedicated a large portion of his book to it.  He did not have the traditional American upbringing.  His father was from Africa and returned there without him.  His mother moved him to Indonesia, then sent him to live with his grandparents in the colonized Hawaii.  He seemed to fill his formative years with many male role models.  What a shame those role models were such blatant socialists. 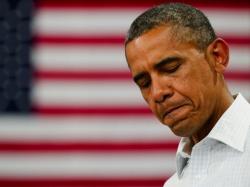 Not since Michael Moore's last film have I seen such a piece of propaganda try to pass itself off as a documentary. This isn't a movie about fact, although yes, I'll concede that there are some facts in it, it's simply a movie about Dinesh D'Souza's opinions.

D'Souza's arguments in this movie are flimsy at best. It's all pure conjecture. He interviews a psychologist about the effects of an absentee father on a child and then acts as if it is fact about Obama and his family. He shows associates of Obama trash talking America and then uses that to say that Obama must hate America too. He talks to distant family members of Obama's and people in Kenya who knew Obama's father and asks insightful questions like, “You knew Obama's father and you've seen Obama give speeches on TV, don't you think they sound the same?”

The final portion of the film where D'Souza tries to predict what the world will look like in 2016 is even more conjecture. It's entirely guesswork and obviously meant to scare voters into voting against him.

As Eric pointed out, this isn't a movie that's going to change anyone's mind. This is because the kind of person whose mind might be changed by it, will never see it. The only kind of people who will see this movie are those who follow politics and those are the people who already have their mind made up. They will see this and agree with all of it or agree with none of it. What they'll mostly be though, is disappointed by it. And that's because no matter what your feelings are about the president, I don't know how you could be entertained by this movie.

As a host D'Souza is decidedly uncharismatic. His arguments are weak and subjective. He tells his story in a dull monotone. There's not much action apart from some dramatic camera angles and music while “experts” talk on the telephone.

I think we all probably know someone who drones on and on about politics. You know the type. They give their opinions and interpretations as fact. That's what D'Souza reminded me of, only since this is a movie you can't tell him to shut up and leave you alone. Well, you can, and I did a few times while watching, but unfortunately it won't do you any good. You're stuck listening until the end of what feels like a very long 90 minutes. 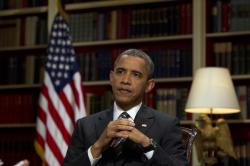 Yeah Scott, D'Souza is a boring narrator who speaks in a flat tone. He makes many assumptions and leaps to conclusions throughout the film. He is as partisan for the right as Michael Moore is for the left but at least Moore knows how to make propaganda that's entertaining. This film is slow and dull, and features amateurish looking graphics.

I will admit that I learned a few new details about Barack Obama's background. It made me like, admire, and appreciate him even more than I already did. His rise to power was meteoric and I will freely admit that race played a part in it. At least in the sense that he was the right man in the right place at the right time. America was ready. However, the fact that every president before Obama was a Caucasian man demonstrates that race (and gender) has played a role in every single presidential election in the history of this country. The fact that it took well over 200 years for us to reach a place where a man of color could even get the nomination from one of our two biggest political parties, let alone get elected, says it all.

One thing I noticed about this film is the double standard with which President Obama is treated. I cannot ever remember another president, or even a presidential candidate for that matter, whose “world view” was discussed and dissected like this one. He's a liberal just like millions of Americans are. Why do his detractors insist on making him out to be a socialist? I don't think Obama is so different from any of the men who have led this country before him. And the fact that he was able to get elected (twice!) proves what an amazing country, with an unlimited potential for all of us, we live in. Not to mention what an effective politician the man is. He has mobilized and strengthened the Democratic Party much as Ronald Reagan revamped the Republican Party 30 odd years ago.

Yes, Obama has friends and associates with radical views. So what? That doesn't mean he agrees with them on every issue. Speaking from personal experience it's possible to feel shame and a bit of anger at this country while still being a true patriot and proud American. The United States of America has many flaws and has often failed to live up to its ideals. But that is only because the Founding Fathers set the bar so damn high. The one thing all of us should be able to agree on is the sacredness of our Constitution and our inalienable right to personal freedom. The fact that you can be friends with communists and still get elected president of this capitalist democracy proves just how fucking great this country is. It works. D'Souza offers absolutely no proof that Obama dislikes this country's power nor does he make a convincing argument for his not being re-elected, which of course he was.