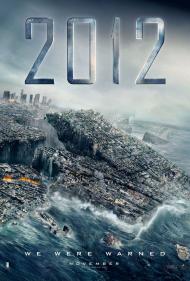 Scott has often complained about the length of many recent movies. With 2012 running for 158 minutes, I have to agree with him. If a movie is going to be over two hours long it had better dam well be a good film, if not edit it down. What is to be lost from a less than good film being trimmed?

2012 tells the story of several different people as they deal with the ending of the world. The details of why the Earth suddenly gets destroyed is not explained. A large sunspot is filmed. The earth's core heats up. The tectonic plates shift. Lots and lots of people die.

One story is of a geologist, who is one of the first men to know of the impending doom. He is given no personality. He just gets involved with the government as the President of the United States and other heads of state decide a secret course of action. He also falls for the first daughter.

The far more interesting story is that of Jackson. He is a frustrated writer. He is divorced, but is trying to connect with his kids, even though they have become close to their mom's new boyfriend. Jackson takes the kids camping in Yellowstone, where they meet the geologist, who tells them nothing of the coming disaster. They do however, get information from a overzealous pirate radio commentator. At first Jackson thinks he is just a kook but ends up needing information from him that he keeps on his conspiracy shelf between Roswell and Marilyn Monroe. The movies becomes completely dull whenever it shifts to any other character than Jackson.

The real interest in the film is of course the special effects. They are truly awesome, but almost comical. Jackson and company have so many close calls that it is impossible to count them all. The plane misses the flying train. It misses the mountain. It crashes through the building just in time. The car stays just ahead of the earthquake. The van dodges all of those fireballs. It became so ridiculous that the tension is non-existent. I was thinking more about how they came up with the idea for these scenes then the actual "story" unfolding.

By the time we discover that the world leaders have an escape plan for a very small amount of the Earth's population, the movie becomes a bit morbid. The people who will be saved are all rich or heads of state. The geologist and the first daughter object to a man in charge that it is not fair. He tells them that they can certainly give up their tickets to anyone they want. Neither does. Is it not interesting how easy it is to bitch and complain when you yourself do not have to make the tough decisions.

Far too many scenes feature someone phoning a loved one for an emotional farewell. Glover is dull as the President. He stays behind as an act of standing with his people to the end. But like a true political hypocrite, he saves his own daughter while comforting a doomed little girl. 2012 could have been a better film had they simply trimmed every scene that did not feature a special effect or Cusack.

As far as big budget blockbusters go, I have seen worse.

I mostly agree with you Eric, and yet I still apparently enjoyed it more than you did. The action scenes and close calls are way over the top, but they're still impressive enough to be entertaining. Okay, so I never once felt like Jackson was in real danger, but the eye-candy is pretty sweet.

Like you though I found the scenes without John Cusack and his family to be interminably dull and melodramatic. Adrian's phone calls with his dad are bad enough, but then they throw in George Segal and his estranged son. These moments wouldn't be so bad if the writing were better. There's no real emotion involved with the scenes, they are just incredibly sappy and as you say Eric, they over-extend the running time.

The ending also doesn't make very much sense. Without wanting to spoil anything, it certainly seems to me that given the method of rescue that is used, many more people could have been saved.

Perhaps the biggest surprise about this movie is that it wasn't released in the Summer, because clearly this is a big-budget Summer blockbuster. Maybe the only thing more surprising is that they seem to have released it at least 2 to 3 years early, since releasing it in either 2011 or the summer of 2012 would seem to have made more marketing sense, but then maybe Columbia was just nervous some other studio would beat them to the box office.

In any case, like most Summer blockbusters, this movie is all about spectacle. It's one that really pays to see on the big screen. Sure it needed much tighter editing and a better script, but as far as mindless big budget blockbusters go this one isn't all bad.